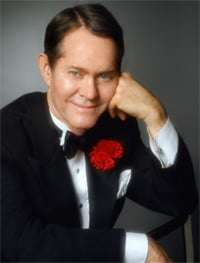 Having just finished a run at Crazy Coqs paying tribute to Mabel Mercer, arguably the original queen of cabaret, K.T. Sullivan is now joined by the man who has been dubbed “King of Cabaret”, Steve Ross, for an act best described by the title of one of the songs they perform, ‘Class’. That Kander & Ebb ditty (from Chicago) is given its full satirical value, the pair having as much fun as the audience. Later the operatically trained Sullivan is heard offstage warbling the coloratura scales that alert Ross to the entrance of Mabel in Gilbert & Sullivan’s The Pirates of Penzance, and a playful rendition of ‘Poor wandering one’ follows.

The show is fun for all, if with occasional reflection on unrequited love, without which no cabaret performance would seem complete. Jerome Kern and Leo Robin’s ‘In love in vain’ is one of the definitive songs on the subject and Sullivan sings it beautifully. Another reflective ballad, and a highlight, is Ross’s achingly wistful ‘One more walk around the garden’ from Burton Lane and Alan Jay Lerner’s short-lived show Carmelina.

The evening starts with a trio of songs by the Gershwins, ‘They all laughed’, ‘Who cares?’ (sung in counterpoint) and ‘Isn’t it a pity?’, followed by Jimmy McHugh and Dorothy Fields’s ‘I can’t give you anything but love’, the lyrics of which were based by Fields on an overheard conversation. Sullivan then adopts a guttural accent for ‘I’m a vamp’, partly sung in German, in which she boasts of souvenirs that she has kept from her conquests including “Hitler’s first moustache”. Sullivan then becomes Betty Boop to sing DeSylva, Brown and Henderson’s ‘I wanna be bad’, before displaying her ability to belt, as she builds to the climax of Sondheim’s impudent ‘I never do anything twice’.

Sullivan’s light soprano also serves perfectly for a medley of songs featuring her first name, Kathleen, informing us that “Thomas Westendorf, the composer of ‘I’ll take you home again, Kathleen’, composed it for his wife, whose name was Jenny”. Ross sings a sprightly version of Ronny Graham’s little-known ‘Unrequited love march’, satirising macho self-pity, before pointing out that requited love can have its drawbacks, the cue for ‘I’ve been married’ from an unproduced stage version of My Man Godfrey by Gerard Kenny and Alan Jay Lerner, who wrote the flippant but bitter lyrics – Lerner was married eight times!

Ross, his singing so easy on the ear as he invests every lyric with meaning, is also an accomplished pianist and plays a medley of Edith Piaf hits. There is also a Sullivan-Ross medley of recollection, in which Sondheim’s ‘Remember’ segues into ‘I remember it well’, ‘When I grow too old to dream’ and the exquisite duet ‘Thanks for the memory’. It is a beautifully conceived selection. One of the final numbers that the pair perform do is a paean to the famed London street, ‘Piccadilly’, no doubt chosen because of the thoroughfare’s proximity to this beautiful Art Deco venue which, in Sullivan and Ross, has one of its strongest attractions.