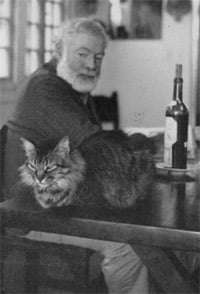 “Too Close To The Sun” is “a fictional account of what might have been Ernest Hemingway’s last challenge”. It is set in 1961 during the last year of the writer’s life in Ketchum, Idaho, to where he had retired in bad health, drinking heavily, not writing very much and generally falling apart at the seams. That was when the great posturing ego that was Hemingway was not hunting, shooting and fishing in the macho way that only Americans really understand. The writer is living with his latest wife, Mary, last of the four women he married. He has employed a young secretary, Louella, something pretty to have around the house to grope, who is tolerated (just) by Mary who also believes that the teenager is angling to be wife number five, so she can inherit the Hemingway estate. Enter Rex, an old friend from school, now a Hollywood producer who is hoping to get Hemingway to endorse a film about the writer’s life. Rex, in cahoots with Louella trying to manipulate the writer into agreeing with his plans, plus Louella’s own possible hidden agenda, may well have led to the writer’s suicide.

In his day Hemingway was considered a major writer who lived an astonishing life. He was a World War One ambulance-driver for the American Red Cross, he was wounded on the Italian border and was awarded the Italian Silver Medal of Military Valour for saving the life of an Italian soldier. As a writer Hemingway went to Paris and became part of what Gertrude Stein called the Lost Generation, meeting the likes of James Joyce, Ezra Pound, Ford Madox Ford, Wyndham Lewis, John Dos Passos and F. Scott Fitzgerald. He achieved great success with some of his novels, many of which were filmed, and he ultimately received the Nobel Prize for Literature. Maybe a man or a monster like Hemingway with all that life-experience deserves an opera rather than a musical depicting the last few months of his life when he had virtually lost his talent for writing and was sick and boozed-up for most of the time, and just about hanging.

The libretto of “Too Close to the Sun” is based on a play, which begs the question, why add music? The subject-matter is not inherently musical but, as is the way of these things, the four characters in the piece every so often stop talking and burst into song, for no apparent reason. You could say that about any piece of musical theatre but, unless you are going to write a through-sung piece, there seems little point in decorating an already existing play with songs, especially as they add little and provide no further illumination on the subjects, a not-very-interesting quartet of warring parties. The titles of some of the songs spell it out: ‘I Do Like to Be Liked’, ‘Make Yourself One with the Gun’, ‘All Will Be Well’ and ‘I Did My Best’. The music is in a mixture of styles including jazz, Latin and modern abstract but adds up to very little. 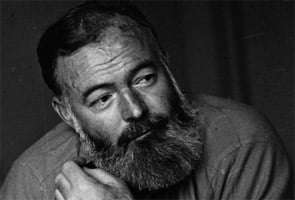 The dialogue is not much better. Ernest, on describing his “sheer joy in my craft”, says “writing is how I rework the word into a place I can live in”, and “America only learns how to think when I have had my say”. Oh, yeah? The poor players try to deliver such platitudes in the best way they can but what might have been a long day’s journey into one man’s dark soul turns out to be just a common-or-garden domestic spat.

James Graeme as Hemingway looks more like film-director John Huston, another artist with an ego as big as all-outdoors, but manages to give credibility to a once-great man now growing old disgracefully and squandering his former talent by pickling it in alcohol but still playing at being the eternal lecher. Christopher Howell (standing in for Jay Benedict on opening night) has an impossibly unreal character to portray in the would-be-successful Hollywood producer down on his uppers. The two women — wife Mary (Helen Dallimore) and secretary Louella (Tammy Joelle) – are no more than ciphers and breathing life into them is impossible, although Dallimore as Mary is suitably tough in trying to keep Ernest off the booze and the women.

The situation presented here is full of promise but it probably needs an Albee or a Stoppard or a Hampton to kick it into life. It lacks imagination and reveals nothing at all about the life of a writer in decline or how the big bully became a recluse, and sheds no light on the addictive attraction of drink or why men are driven to suicide. Not many questions and no answers to speak of.