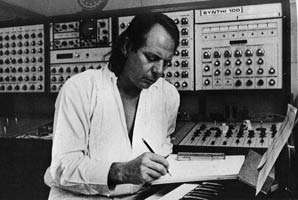 Inori, composed by Karlheinz Stockhausen (1928-2007) during 1973 and 1974, formed the second concert in the first of the BBC Symphony Orchestra’s “Total Immersion” series, one-day events of concerts, films and talks at the Barbican Centre. This year, Stockhausen will be followed by profiles of Tristan Murail (7 February) and Iannis Xenakis (7 March).

Inori – the Japanese word for ‘prayer’, ‘invocation’ and ‘adoration’ – is the cue for an orchestral work that David Robertson (introducing Inori from the stage in relaxed and informative style) informed that the music is notable for its “essential simplicity” and that the two dancers are “singing silently through prayer gestures”. The latter two, very experienced in their roles, perform from a raised platform (a pavilion-like edifice) above the orchestra; certainly their gestures (precisely notated by Stockhausen), mirroring what the orchestra plays (equally fastidiously scored), did add something to the aural experience, yet as Paul Griffiths pointed out in his programme note, “while they (the dancers) command our attention, they direct that attention always to the divinity Inori addresses, the divinity of sound.”

Inori has a Japanese, certainly exotic, feel to it – but it is not pastiche in any way (Stockhausen had absorbed non-western influences). A trance-like atmosphere is created, through bells and composed overtones, and carefully written fluctuations of pulse and changes of colour that (for the most part) avoid stasis. Often the music is beguiling (sometimes playful and teasing), the overall effect drawing the listener into a meditation that is not without the suggestion of the primitive and which, towards the close, erupts with seething anger, but by this point one has become familiar with Stockhausen’s musical “formula” and the outburst (very closely composed) not only belongs to the whole has become inevitable. 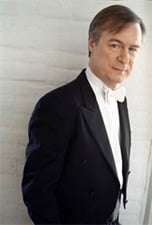 In terms of “sound” itself, Stockhausen has created some wonderful timbres through his use of a conventional (large) orchestra, which sits unconventionally (violins to the right of the conductor, cellos centre-left, violas to the left – the principals of each section sitting in the back desks – double basses at the back of the platform, with woodwinds, brass and percussion less in ranks than normal). Perhaps unexpectedly – but maybe due to the transcending nature of the piece – there seems to be a kinship with Messiaen, and in the soundworld (particularly in the use of lower-toned instruments) that recalls Messiaen’s (written-earlier) Et exspecto resurrectionem mortuorum. Yet, with the possible exception of the angry climax, Stockhausen’s musical language is no more challenging than, say, Varèse’s Arcana (1927, and which was specifically suggested), and sometimes reminds of Debussy and Ravel; in addition, the very specific description of ‘place’, if not ‘time’, is picturesque and inviting.

Certainly, for the 70 minutes that this performance lasted, sound and gesture were entwined, and Inori will work as sound-only very finely. Eventually a whole was formed through cathartic climax and a both a ‘real’ conclusion (the dancers leave the hall (here through the door at the back of the platform that reveals a mist-filled place) and suggesting that ‘others’ will be along to undergo the ritual once more.

This account seemed remarkably fine. David Robertson and the BBC Symphony Orchestra had obviously worked very hard on a score that the conductor called “intoxicating” and the two dancers were very poised and expressive in their many gestures (save for Alain Louafi, who joined in the explosive outburst by climbing down from on-high and using a pillow-like object like a punch-bag, the resulting sound however being ‘musical’). Inori drew a good house in terms of audience-numbers and, bar three, all lasted the course. Certainly Inori proved something not to be missed and another reminder that Stockhausen had a mastery of the orchestra, and sound itself, that can perhaps be overlooked.