“Experience the musical glories of the greatest decade of them all at a live show designed by Trevor Horn, founding member of The Buggles. After recording the chart-topping 1979 hit ‘Video Killed the Radio Star’, Horn, former member of Art of Noise and the producer who created the sound of the 1980s, worked on ABC’s ‘Lexicon of Love’, ‘Owner of a Lonely Heart’ by Yes, and Frankie Goes to Hollywood’s number one hits ‘Relax’, ‘Two Tribes’ and ‘The Power of Love’. He was the first producer since George Martin to be number one simultaneously in the US, with Yes, and the UK, with Frankie Goes to Hollywood, and with Malcolm McLaren in 1982 created the UK’s breakthrough rap hit ‘Buffalo Gals’. Horn has since produced stars including Rod Stewart, Tina Turner, Belle and Sebastian, Bryan Ferry, LeAnn Rimes, Faith Hill, t.A.T.u., Pet Shop Boys, and Robbie Williams. He has received numerous awards for his production work, including a Grammy for Seal’s single, ‘Kiss From A Rose’ in 1996. A Trevor Horn Production features many of the musicians that played on those records, along with some very special guest vocalists.” [Southbank Centre website]

This sell-out Trevor Horn gig generously launched with guitar duo Nicholas Ball and Max Radford – both highly competent. Nicholas repeatedly declared that it was an honour to perform at Queen Elizabeth Hall and told us he was on the train home the night before when he got the Trevor Horn phone call to perform. Their set was wistful and sombre, songs of loss and nostalgia, in keeping with the Calm Against Living Miserably, a male suicide prevention organisation. Alas Nicholas’s diction needs sharpening up. 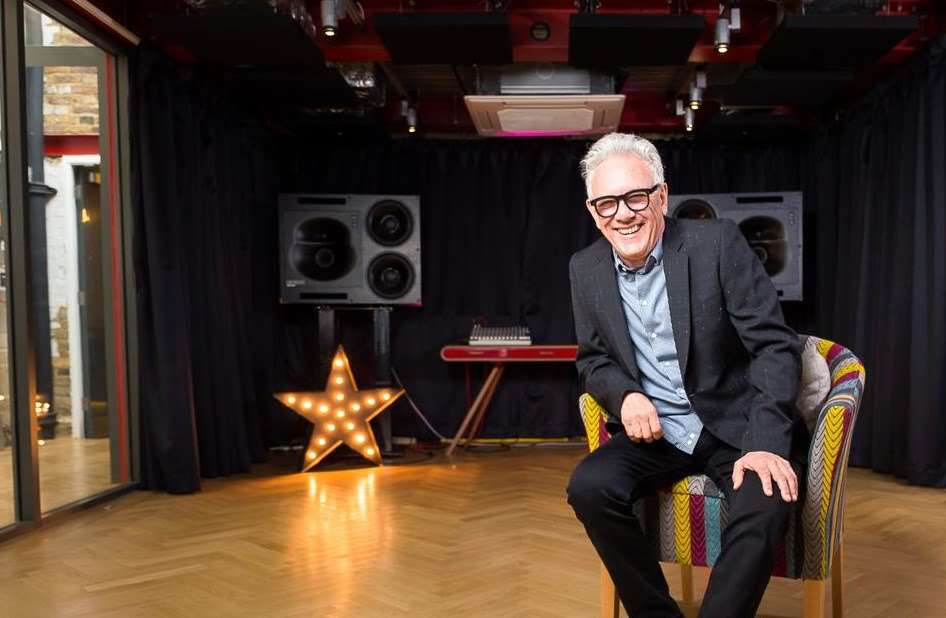 After five mournful songs the duo made way for Trevor Horn…

What needs to be said about Mr Horn? The concert was an admix of his stellar back-catalogue and his new album “Trevor Horn Reimagines The Eighties”. The lights burst into Technicolor as the band rocked up: including Lol Creme the bass guitarist of 10cc and Godley & Creme, Phil Palmer the guitarist of Dire Straits and for Eric Clapton, Steve Ferrone, drummer of the Bee Gees and Tom Petty, Simon Bloor of Lana Del Rey, Alan Clark Hammond of Dire Straits…

Horn, bedecked in trademark silver jacket, launched the Two Tribes torpedo. Sirens wailed. Shivers ran down the spine. “Always a good way to start”, laughed Horn, then he sang Video Killed the Radio Star, a classic of British pop. Horn introduced Lol Creme as Kate Holmes, in patent black cigarette heels and tight trousers zipped up to the knees, sang an intimate version of Bruce Springsteen’s Dancing in The Dark.

Next came Joe Jackson’s It’s Different for Girls sung by Steve Hogarth in a darker baritone tricked out in a dramatic wide cowl-neck jacket. Horn asked us “See if you recognise it” before drumming and strings meshed into Ashes to Ashes sung once more by Hogarth punctuating the lyrics with dramatic hand motions. A speedy version of Rubber Bullets followed, then Kate Holmes who has recently given birth sang a charming arrangement of All the Things She Said. Izzy Chase and Matt Cardle (X Factor-winner) sang a soulful Slave to The Rhythm. Matt’s voice is extraordinarily agile; however his repetitive hand movements tend to distract and disengage us emotionally.

“Sinatra and Bennett wanted to cover it”, Horn said as The Buggles’ second hit Living in the Plastic Age began. Ryan Molloy, in peppermint-green shirt, gave a full-blooded rendition of Tina Turner’s What’s Love Got to Do with It. The cornucopia of hits overflowed. Jimmy Wood, in scarlet Cuban heels, sang and played the mouth organ for Blue Monday, then followed Brothers in Arms, Girls on Film and Matt Cardle’s rendition of Am Not In Love, a gold-plated showcase for Cardle’s immaculate diction, Cher-like emotionality and quieter hands.

The evening drew to a close after two-and-a-half hours, without interval, “finishing up with an old chestnut”, one of the most controversial and lucrative songs of the 1980s, Relax. Molloy delivered a phenomenal force-of-nature interpretation. This singer is a revelation, on a par with Tom Jones and Freddie Mercury, and he went on to Money for Nothing; superlative.

Horn is a genius and a gently comedic raconteur. This one-off gig recreated the thrill of the oft-groundbreaking pop music of 1980s’ Britain. Will it ever reach those giddy heights again or has the Internet Killed the Videostar?