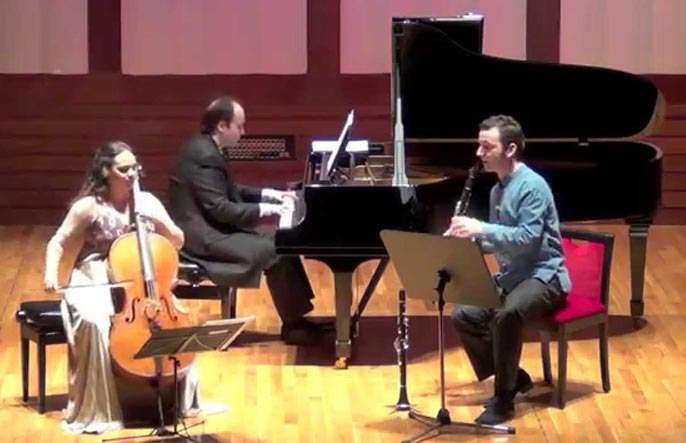 Based in Istanbul, the Trio Kuvars Viyolet brings together three gifted musicians of the younger school: Evrim Güvemli, clarinettist with the Istanbul State Symphony Orchestra, Rahşan Apay, and Jerfi Aji, a member of the MIAM faculty at Istanbul Technical University. Between them they embrace a breadth of musical interests ranging from core classical repertory through esoteric byways to the currently contemporary. Their unruffled stage chemistry is blended and cultured. In best chamber style they play music rather than instruments, they listen to rather than dominate each other, and they invite the audience to share their pleasure and discovery.

In Güvemli’s hands the clarinet is about sounds growing out of stillness and decaying into nothing. He loves long lyrical lines, mellow beauty with a touch of autumn huskiness, sharply etched attacks, and the lightest of tongued caprices. Aji, ever the quiet serious thinker, probes and analyses, sculpting a melody, balancing chords, rising to the heights without an ugly sound or gratuitous gesture to be found. Reminiscent of Augustus John’s Suggia, Rahşan Apay commands with her elegance and posture – the faintest of frowns, a movement, a sigh, an imperious bowing arm, a half smile, a knowing eye contact, communicating worlds of passion and fire. A Scheherazade of the cello, she weaves musical tapestries where every note, silence and nuance, be they melody, conversation or accompaniment, is invested with tension and purpose. The flourish of conquest, the sweet slumber of stories laid to rest, dreams and dramas held in amber, are hers for the telling.

This inventively programmed recital, in the vaulted mid-19th century chapel of Istanbul’s Lycée Notre Dame de Sion, juxtaposed a brief recent composition by Armağan Durdağ with relatively unfamiliar Clarinet Trios from Carl Frühling (published 1925) and Nino Rota (1973). Born in Istanbul in 1981 and presently pursuing a doctoral programme at the University of Arizona, Durdağ is a new-generation voice, the emotional voltage and meditative depth of whose music journeys some way beyond its professed post-minimalist/atonal/Turkish-Middle Eastern didactic.

Commissioned by the Trio Kuvars Viyolet and premiered by them in Izmir in December 2014, Taylan is a five-minute memorial to the composer’s close friend and peer Taylan Cihan (1978-2014). Beginning and ending with cello, travelling a road from low-D to the high-C soul-lands of Richard Strauss’s Death and Transfiguration, it’s an essay of concentrated tension and anguished power that should be much more widely known. Taylan, in Turkish, means “a soil for farming despite heavy rain”, and Durdağ assigns each of his instruments a representational role. Water and rain, worldly and unworldly knowledge (clarinet); soil, the fertile earth (piano); the human spirit, “aliveness” (cello). The concept, the interplay between linear and horizontal, the sound picture, works brilliantly.

Frühling (1868-1937), a Jewish-born Protestant-convert from Habsburg/Ukrainian Galicia who settled in Vienna, died in poverty shortly before the Anschluss, having worked as an accompanist for such as Huberman and Sarasate. On another planet from the Schoenberg circle, he wrote copiously but published little and enjoyed, it seems, few performances. Gently ‘right’ and inevitable in its construction, the four-movement Clarinet Trio has beautiful moments. Consolingly, Schumann and the Brahms circle, the familiarity of minor and major keys, are never far away. Bortkiewicz, too: I wonder how well the two men – penniless refugees both (the latter via a sojourn in Allied occupied Istanbul) – knew each other? Current recordings somewhat chrome-plate and small-scale the music, smoothing over the edges. The Trio Kuvars Viyolet took a more robust view, giving the passing folkloristic references (for example the Finale) a Mahlerian grit. The venue’s medium Yamaha grand stood up well: only in the big tutti passages did one miss the fuller body and tone, the lower octave bloom, of a Steinway D.

Rota’s evergreen Trio occupies a similar place in the 20th-century to Frühling’s fifty or more years earlier, neo-classical pastiche and Poulenc-style craftsmanship substituting for late-Teutonic romanticism. Aji’s opening staccato chords set the mood ideally – a civilised after-dinner divertissement designed to entertain rather than philosophise. All three players, but especially Güvemli, caught the burlesque mood of the Finale (suggestive of Malcolm Arnold meeting Khachaturian on a Fellini set) with easy wit and grace.

“I’ll do everything I can to give everyone a moment of happiness”, Rota once claimed. “That’s what’s at the heart of my music.” The Trio Kuvars Viyolet embraced the message. Their Mozart opener (a straightforward transcription by Durdağ that for my taste might perhaps have done more to elaborate the piano part) made me want to hear Aji the concerto-player (I remember a particularly bold Ravel G-major in 2001). Their Juon encore (the ‘Humoresque’ from the 1920 Trio Miniatures) witnessed Güvemli in folk drive. And the Beethoven found Rahşan Apay in gran espressione form, pacing and wooing its slow melody and turning cadences with rapt artistry.

Ensembles come and go. I hope this one stays. These musicians deserve a high-profile platform – the Istanbul International Music Festival for starters.