The feedback from the first performance of Sir James MacMillan’s Fifth Symphony was, to put it neutrally, enthusiastic, but it was scant preparation for the impact it made at its London premiere. MacMillan’s music is steeped in the composer’s Catholic Christian faith, which he communicates to listeners both secular and religious with a directness that never patronises or seems facile – this is heilige Kunst from an imagination that feeds on faith with moving candour. 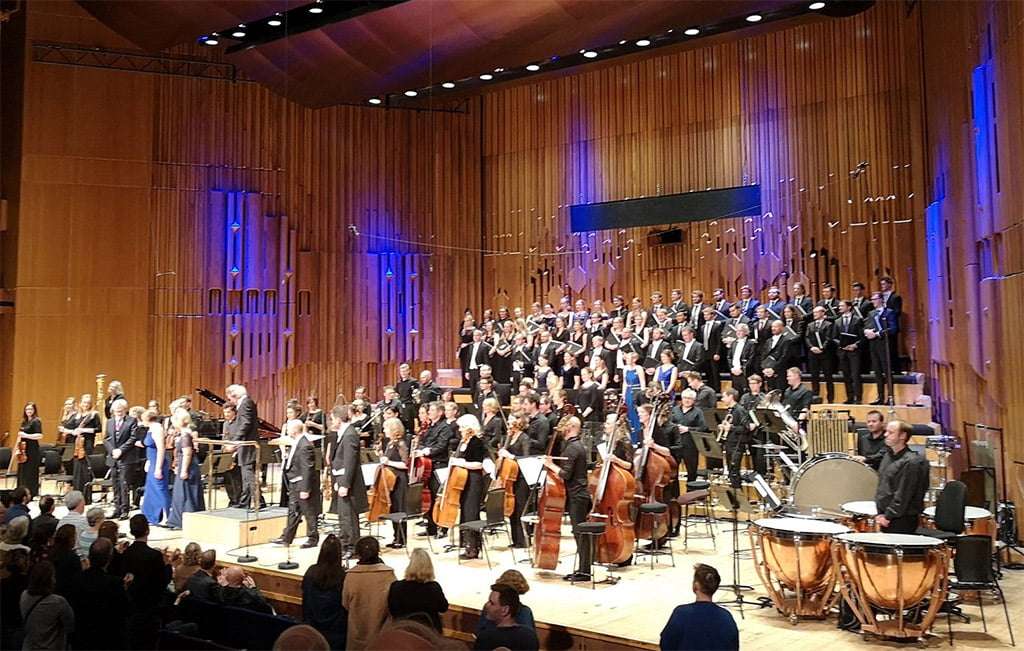 MacMillan’s Fifth is a substantial choral symphony, about fifty minutes long. Its title – Le grand Inconnu, an odd French translation pregnant with theological interpretation – refers to the Holy Spirit that rushed upon the Disciples at Pentecost. The three movements revolve round the elements of the Holy Spirit – breath, water and fire – and MacMillan’s text derives mainly from the writings of St John of the Cross. The chorus’s elemental breathing at the start of the work may not be original, but it made the point that sound has to be generated by something, and chattering woodwind and aerial strings soon shimmered with the expectancy of ‘a mighty, rushing wind’. MacMillan’s brand of precise impressionism evoked the water and fire of the following two movements, and I marvelled at a process of development-by-stealth, of revelation approached, delivered, then slowly withdrawn, as though the vision was there all the time, just waiting to be released. The music evokes all this in ardour, brilliance and, being Catholic, chaste sensuality. Among the many stand-out moments the passage closing the Living Water movement, where the sixty-strong chorus (The Sixteen and their training choir Genesis Sixteen) separate into twenty parts, is an astonishing piece of writing, and I am still coming to terms with the freewheeling burst of energy that pronounced the conclusion while allowing the music to continue to burrow into the mind. How I long for this degree of vision and inspiration to be matched by its expression in new music, and perhaps it is just as well it rarely happens.

This was preceded by the UK premiere of MacMillan’s The Sun Danced, his thirty-minute cantata first performed in October 2017 at the Sanctuary of Fatima in Portugal, to mark the centenary of the apparitions of an angel and of Our Lady to three children and the Miracle of the Sun, when the Sun seemed to move in the sky, hence the work’s title. Like the Fifth Symphony, it is scored for choir and orchestra, with a big role for soprano. The Portuguese, Latin and English texts are taken from the words spoken by the angel and Our Lady of Fatima to the children. The music’s Ikon-like ecstasy, naivety and immediacy are disarming, Mary Bevan spun the vaguely erotic melismas into devotional iridescence, and the chorus steered things to a triumphalist conclusion that could only have been improved if Bevan had miraculously been assumed into the stage lighting. Compared with the Symphony, the music is possibly nearer to Catholicism’s penchant for a primal sentimentality that delights as much as dismays, but MacMillan’s handling of chorus and orchestra is assured, vivid and perfectly judged in the way it never outstays its welcome. The Britten Sinfonia’s playing gleamed, glowed and sparked as required, the chorus had a fabulous attack, and Harry Christophers guided his forces with affection and conviction.

Perhaps the two MacMillan works were not quite enough for a full programme, and perhaps the Arvo Pärt–Britten pairing at the start made it too long. The Britten Sinfonia strings flattered the rich rotation of descending layers of Pärt’s Cantus in memoriam Benjamin Britten, its meditative minimalism briskly blown away by The Sixteen’s virtuoso a cappella singing of Britten’s Hymn to St Cecilia. A recording of the MacMillan works, on The Sixteen’s Coro label, is in the offing.