The UBS Verbier Festival Orchestra, an ensemble of 100 college- and graduate musicians from around the world, is ending its eighth season with a tour of the US and Europe.

In a New York season that has so far brought the great orchestras of Berlin, St Petersburg and the Lucerne Festival, one might think that the appearance of an orchestra of young musicians embarking on professional careers might suffer by comparison. To be fair, the UBS string section may not match the brilliance of the Philadelphia Orchestra or the warmth and sheer power of the St Petersburg, but its precision, refined phrasing and impeccable balance was most impressive. And Charles Dutoit – who was conducting with somewhat more expression and emphasis than I have previously encountered – seems to have a strong rapport with the orchestra. 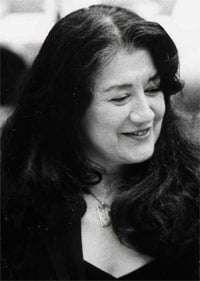 Martha Argerich brought her amazing technical control, extrovert approach, and (living up to her reputation for unpredictability) more than a few individual touches to Prokofiev’s Concerto No.3. Large stretches of the first movement could easily have been mistaken for Ravel, as Argerich, Dutoit and the UBS Verbier players put the spotlight on the transparency and color of Prokofiev’s orchestration; Argerich seemed focused on the long line and balances within the piano part – but also made startling use of staccato accenting at the top of some phrases, echoed by Dutoit and the orchestra. Both soloist and conductor brought out the balletic nature of the second movement; Dutoit adopted a deceptive, leisurely approach to the opening section – reflected with slightly more tension but also uncanny beauty in Argerich’s poetically phrased echo – and put contrasting emphasis on the harmonic and rhythmic tension of the middle section. Argerich and Dutoit relished the finale’s quirks, both musical and in the scoring. A few idiosyncratic, even jarring, tempo shifts did not completely succeed, but overall Argerich’s amazing playing, along with that of the excellent orchestra, prevailed in the end. Argerich offered a couple of movements from Schumann’s Kinderszenen as an encore.

Dutoit is one of today’s leading Berlioz interpreters, and his approach to Symphonie fantastique with these young players took more than a few risks, most of them to strong effect. The Largo introduction to the first movement seemed at turns a bit cautious and unexpectedly emphatic; the faster music, Allegro agitato e appassionato assai, ran high in both these qualities, with particularly impressive string playing. The second movement ‘Valse’ was played with charm – and unusual attention to the handful of foreboding moments that portend the grotesquerie of the final two movements. The third movement was astonishingly beautiful, with especially refined playing from the cor anglais soloist, principal oboist, and a fine percussion section creating very effective ‘thunder’ as the symphony’s atmosphere takes its dark turn. Unfortunately, the atmosphere was undermined by audience noise – not only coughing, but whispering!

‘March to the Scaffold’ (played without the repeat) showcased the orchestra’s sonorous brass ensemble and, of course, the percussion. The finale, ‘Witches’ Sabbath’, was remarkable – not only projecting the music’s ‘story’ in impressive relief and detail but showcasing every section of the orchestra: the sort of playing that one would expect from a top-tier ensemble.

There were two encores: the ‘Farandole’ from Bizet’s L’Arlésienne (Suite No.2) and Chabrier’s España, which was played with particular brio.