Gilbert & Sullivan
The Mikado, or The Town of Titipu – a comic opera with lyrics by William S. Gilbert and music by Arthur Sullivan 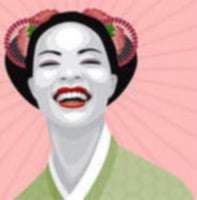 An all-male “Mikado”? Before G & S purists become apoplectic, let me explain that this is nothing new … for the Union Theatre, that is: its Christmas show last year was “The Pirates of Penzance” also in an all-male version. This isn’t to say that the shows are changed in any major way. The male roles are still male and the female ones still female; it’s just that they are all played by male actors.

Gilbert & Sullivan’s comic opera, probably the most successful of all the Savoy Operas, is pretty rum anyway. It tells of Nanki-Poo, a wandering minstrel disguised as a trombonist who, on arriving in the town of Titipu in Japan, finds that his beloved Yum-Yum is engaged to her guardian, Ko-Ko, a tailor who is also Lord High Executioner. It’s the usual topsy-turvy G & S world in which, in exchange for being allowed to marry Yum-Yum, Nanki-Poo will be executed one month after his wedding. And in Titipu the rule is that, when a man is decapitated, his wife must be buried alive.

Nanki-Poo is discovered to be the son of The Mikado, and whoever kills the Mikado’s heir must be boiled in oil. Now here’s a how-de-do, as they sing at one point. Ko-Ko, the Lord High Executioner, will have to execute himself. Of course nothing really drastic does happen and Ko-Ko ends up with Katisha, an ageing lady of terrible aspect, who is pursuing her would-be lover Nanki-Poo. The fun of the piece is seeing how the absurd plot is worked out. 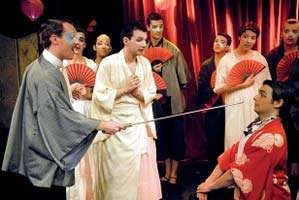 The Union Theatre’s company of thirteen men works hard, and with great ease. Yes, it is camp, but then G & S has that element anyway, but even with a baker’s-dozen of prancing young men it never topples over into camp for camp’s sake. In fact they all play it fairly straight and most of the screaming comes from the audience, although the line “with his Nancy on his knee” takes on a new meaning. This is essentially not a drag-show but a skilfully worked out and well paced production, properly drilled with some excellent choreography by Vanessa Fenton and really tight direction by Thom Sutherland. It also looks delightful in Alison Brookes’s designs.

Although it is very much an ensemble piece, there are individual performances that stand out. Martin Milnes’s Yum-Yum has real charm and his falsetto singing adds an extra layer of shrill dottiness to the proceedings. Christopher Howell plays Ko-Ko not as the usual grovelling and snivelling creep but as a Jewish tailor in the style of David Kossoff, and he’s got a ‘Little List’ to make you to sit up and smile. Stuart Armfield’s Pooh Bah sneers to good effect and Samuel J. Holmes’s Katisha (think Dot Cotton in a basque) is quite hilarious as an old bat trying to find a man at any price.

But, really, the whole company is so good and the show comes together in such an unforced and almost spontaneous way, that it gives Gilbert & Sullivan’s piece a new lease of life much in the way that Jonathan Miller’s English National Opera staging did twenty years ago. This “Mikado” is a total delight and, at just two hours and ten minutes, never outstays its welcome.