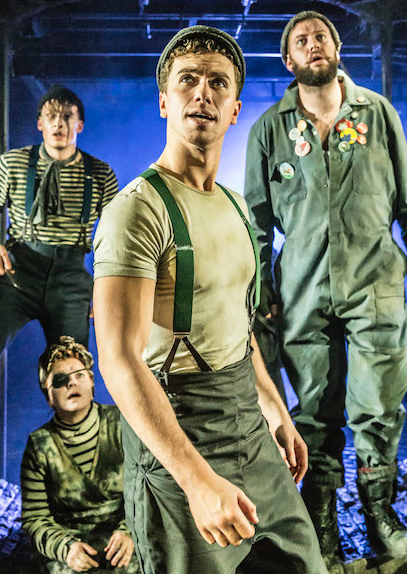 Pissed off with West End musicals? Well, Urinetown might just be the show for you! Certainly it’s not run-of-the-mill if self-aware of what it is, with two characters – Officer Lockstock and Little Sally – constantly reminding us we’re in a musical (indeed Sally pre-empts any suggestion about the odd name by remarking that the title isn’t perhaps a marketeer’s dream).

Nor is the setting typical: we’re in a dystopian tale about a future where global warming and natural disasters have left the world perilously short of water. Caldwell B. Cladwell survived the stink some 20 years back (one can only imagine!) by setting up a company to privatise the urinals so everyone has to pay to pee (and, presumably, wash their hands after). In true capitalist fashion, Urine Good Company (UGC) has cleaned up on the public amenity front and, with the legislature in his pocket, Cladwell is just about to increase his profits by raising his prices.

But down at Public Amenity #9, the mood is turning nasty. Bobby Strong’s father has been carted off to Urinetown for peeing on the sidewalk as he didn’t have the price to relieve himself officially. With Officer Lockstock’s help we realise Urinetown is not a place but a metaphor, where you pass over rather than piss. When the price hike is announced urinal-worker Bobby opens his amenity for free and the revolution has started…

Act One ends with the escape of the poor into the sewers with Cladwell’s daughter, Hope, as captive and Cladwell on the rampage, seeing his profits about to be flushed down the … you know where. To reveal more would be unfair, save to say that Sally expresses the general amazement that there’s not a happy ending. But why should there be if Lockstock’s reading-matter before the show starts (as he paces the forestage) is Malthus’s Essay on the Principle of Population? That’s the very volume he hands over to Sally at the end as if any further proof is needed.

There is a love story of sorts (Bobby and Hope are the Romeo and Juliet across the economic divide), but the evening is more Brecht & Weill than The Sound of Music. It’s daft and funny as well as brilliantly set on Soutra Gilmour’s split-level steam-punk design of industrial squalor, with the upper level reserved for the scenes in Cladwell’s shining business tower. The story occurred to Greg Kotis nearly 20 years ago, on a backpacking trip to Europe when he was ‘caught short’ in Paris’s Luxembourg Gardens with little money for the pay-facilities. With music (and shared lyrics) by Mark Hollmann the show opened in 1999, the hit of the New York International Fringe Festival, before being taken up by the American Theatre of Actors in 2001 and then a three-year Broadway transfer. It took a decade to travel back to Europe and opened at St James Theatre on February 22.

All but three of the original St James cast (and all but two of the band) have been reassembled for this move into the larger Apollo Theatre. The raised stage might distance the action slightly (and I first saw it from the front row at St James Theatre), but the press-night audience lapped up the cast’s abundant energy. Matthew Seadon-Young steps up from his role at St James into likeable Bobby Strong’s shoes, while RSC alumnus Jonathan Slinger once again relishes the laconic gumshoe part of Officer Lockstock. Also returning are Simon Paisley Day, sporting the droopiest of moustaches and still eating the scenery as capitalist baddy Cladwell, sweet Rosanna Hyland as his daughter Hope, and the ever-brilliant Jenna Russell as Miss Penelope Pennywise, whose past is only revealed drip by drip…

The score apes various musical forms, and no more successfully than the high-octane gospel-esque ‘Run Freedom, Run’ (complete with hilarious a cappella section) and ‘I See a River’. There are also some intricate songs where up to four different opinions are accommodated, so musical interest is easily kept afloat. The band is raised stage-right.

The whole thing, at times nicely cartoonish, is directed with madcap aplomb by Jamie Lloyd, with far greater success than The Commitments further up Shaftesbury Avenue at the Palace Theatre. It may cost more than spending a penny, but then it lasts much longer and, however bizarre it might sound, you’ll come out humming the tunes from Urinetown, and surely worth a tinkle!