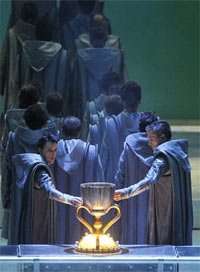 The spectacularly designed modern opera house in Valencia has been open for a few years and has staged some parts of Wagner’s “Ring Cycle” under Zubin Mehta. This was the premiere performance of its first staging of “Parsifal”, a work intended to ‘consecrate’ a stage. An impressive production team and international cast had been assembled for the occasion. Conducting was the Opera’s music director Lorin Maazel, now in his final season in the post, and the German stage- and film-director Werner Herzog had been booked to direct the work. Herzog is no stranger to Wagner, having directed “Lohengrin” in a spectacularly beautiful production at Bayreuth in the late 1980s – a production that was filmed.

Some of the characteristics of that earlier staging were evident in this one – particularly the spaciousness and the welcome tendency not to over-clutter the narrative with superfluous action. The settings were simple and both beautifully and atmospherically lit. The difficult transitions in Act One and Three from the wood to the Temple of the Grail in Montsalvat were handled very well indeed, according perfectly with the orchestral interludes. The woods where Gurnemanz and the four esquires appear to be searching for or awaiting the arrival of the “pure fool” was suggested by two metallic tower-like structures and a constantly changing cloudy green projection onto the cyclorama. A small radio-telescope was placed near the back constantly rotating its dish –searching for the elusive saviour perhaps? Flanking the side of the ‘trees’ were sheer white rocks that seemed to stretch into and merge with the auditorium of the theatre with its white and dark blue tiled interior.

As the transformation to the grail temple occurred the metallic trees drifted away and gradually a huge metallic satellite dish, like some giant receiving station, took its place. So the idea of the constant search for a solution to Montsalvat and Amfotas’s dilemma was always present. Valencia is a city that houses one of the vessels that has always been considered as one of the possible candidates for being the original grail chalice. Perhaps inevitably, there were strong references to this in Herzog’s staging, the Holy Grail strongly resembling that on display in the Cathedral. 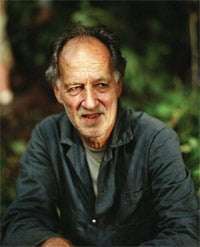 The settings for the central act were slightly less successful. Klingsor’s domain was hardly a place of allure, set as it was in a rocky caved domain with an aperture open to the sky and the world outside. Klingsor too is on the search – as evidenced by his platform-mounted telescope – although his is more defensive. His magic flower garden was hardly a place of great beauty and enticement. Some red tendril-laden plant-like structures did appear, behind which dancers writhed erotically whilst the six principal flower maidens remained in front of the plants providing a vocally alluring if operatically delivered counterpart to their more energetic sisters.

When Parsifal entered the garden there was little sense of underlying menace in this scene and thus Act two took a little while to get going dramatically. The ladies’ chorus was placed in the pit – one of the slight musical misjudgements of the production in terms of sonics, a shame as in the outer acts the handling of the tricky chorus-writing – scoring that needs perfect accord between the singers seen and unseen – was ideally handled. The choral singing was extremely fine, with strong and thrilling vocal surges from the men, and with the boy-choir making a distinctive and ethereal impression.

Herzog’s staging of the drama was relatively conventional but always interesting. He allowed the singers the freedom to simply stand and deliver their narration without encumbering them with distracting movement. Gurnemanz was sung with true bass authority by Stephen Milling, and he made much of the text. He was dramatically and vocally at his best as the emotional older hermit of Act Three.

Occasionally in the first act one wished greater vocal and facial response to passing events – in terms of physical performance his lecture of Parsifal after he shot the swan was not much different to his admonitions of the young squire knights in his charge. Surely it should register as more shocked and angry. Incidentally, this staging provided the best dead swan I’ve seen in a “Parsifal”. More often than not it falls vertically onto the stage from above, or some other faintly embarrassing or unwittingly humorous solution is found. Here, a floppy-footed and droopy-winged yet very realistic bleeding swan with an arrow in its side was carried on by the knights – a telling counterpoint to the wound of Amfortas.

Parsifal was Christopher Ventris, who seems to have a complete stranglehold on this role at present including Bayreuth. He sings this tricky role with both power and beauty, and has the stamina to last the course. His interpretation here was particularly fine in the second act where, despite the generally static nature of the direction, the complex interplay between Parsifal and Kundry gradually built great tension. There seemed to be a palpable and apt eroticism in this encounter both vocally and physically, and Ventris’s Parsifal seemed to suddenly grow in stature and authority as the kiss revealed Amfortas’s plight to him. In Act Three he was also credible as the weary wandering knight reaching the end of his quest. 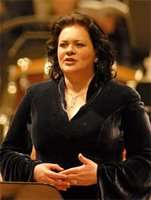 Kundry was sung by Violeta Urmana. This was a role she made very much her own in her days as a mezzo-soprano and it was an enormous pleasure to re-encounter her in the part. Her vocal move to the soprano Fach has not diminished the richness of her middle and lower registers – and now her flexibility and ease in the highest reaches of the role, make for a truly thrilling vocal interpretation. That high B natural to low C sharp at “Ich sah’ Ihn-und -lachte” was piercing in its intensity and the following curse hardly less so. The more tender and lyrical moments also received their due in this complex realisation.

The evil Klingsor was sung with bile and point by the immediately identifiable and charismatic voice of Sergei Leiferkus – who managed to make an impact despite being confined to a platform high up on one side of the stage – no mean feat. Another Russian singer, Evgeny Nikitin, was the extrovert Amfortas. In this production Amfortas is depicted as physically weak, always needing to be carried supported with his arms entwined around a horizontal pole carried by two of the knights, and with a abdominal wound visibly bleeding.

Nikitin certainly fell in with this concept, delivering a very physical performance. Vocally it was strong, too, although almost over-emphatic at times to the detriment of both line and tuning. A shade more variety to dynamics and a touch of introspection, particularly at the passage in Act Three as Amfortas laments the passing of his father Titurel, would have strengthened the performance considerably. And Titurel? This short but pivotal role was sung from the back reaches of auditorium by the Ukranian bass Alexánder Tsymbalyuk in a voice of extraordinary power and resonance. All the other smaller roles were more than decently sung.

From an orchestral point of view there was a huge amount to relish. Orquestra de la Communitat Valenciana, many of its players hand-picked by Lorin Maazel, proved itself to be a Wagnerian orchestra of stature. The musicians produced playing of warmth when needed, but also demonstrated an ability to excellent ensemble and great clarity of texture – just what “Parsifal” needs. The brass had appropriate glint and gleam, and some of the solo woodwind playing – clarinet particularly – was fine indeed. It was a shame the electronic temple bells did not quite synchronise at the crucial moment in the first act, but otherwise this was fine work.

Maazel’s interpretation was generally on the fleet side, although just occasionally the tempos felt a little driven – in particular the second major leitmotif of the prelude initially sounded by the horns and trombones lacked grandeur. As mentioned earlier the Parsifal-Kundry encounter never flagged for a moment and Maazel’s speeds were critical to the success of this passage. His treatment of the ‘Good Friday music’ was mellow and felt.

Herzog’s production had an earnestness and seriousness of approach. Lots of little insights remain in the memory too numerous to catalogue. Welcome was the fact that there was no enactment of a pseudo-Eucharist in the first act grail scene. Rather, the knights filed past the opened grail and each held onto the chalice briefly to draw strength and succour from it. The final scene was very strong indeed. As Parsifal announced the new order, the now-superfluous satellite dish flew upwards and out of sight and the hitherto cloudy sky cleared to reveal a starlight sky with a projected image of the Valencia opera house perched in mid space. It then rose and, space-ship like, suddenly lit up and flew slowly off into the distance to disappear amongst the stars. Visually beautiful, this final image set Wagner’s idea for “Parsifal” as a work to consecrate a stage right at the centre of the drama and fittingly so.