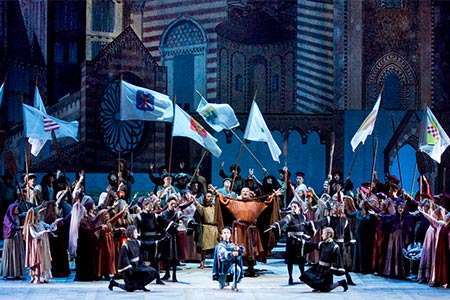 Gianandrea Noseda is marking the Verdi bicentenary with a revival of Simon Boccanegra at Turin’s Teatro Regio, where he has been music director since 2007. This year also marks the 40th-anniversary of the theatre’s eventual re-opening after its destruction by fire in 1936, which in turn is reflected in a decision to revert to, and painstakingly reconstruct, a production by the composer-director-designer Sylvano Bussotti, first seen in 1979, and widely regarded as a major achievement in the company’s history.

A thing of great beauty, it makes for retro if riveting theatre. Bussotti rejected the neo-realist approach favoured by his elder contemporaries Luchino Visconti and Franco Zeffirelli in favour or something more stylised and intuitive, that turns the opera into a meditation on the attractive danger of power. His designs link medieval Genoa with Byzantium and the slightly sinister, twisting graphics of M. C. Escher.

Conjured up by multiple vision gauzes, Bussotti’s corridors of power wind back upon themselves or lead nowhere. The council chamber is a red and gold prison, hermetically and ironically shut off from the world it governs, and the only place, significantly, from which we cannot see the sea, which is elsewhere visible throughout. Private and political conflict can only be resolved away from this gilded labyrinth. The final Act takes place in the open space of a vast beach, where Boccanegra and Fiesco cling together in an extraordinary moment of optimism and regret, before the people gather silently to watch Boccanegra die. The lights of Genoa are still seen in the distance, but we have left its strictures and rituals far behind. 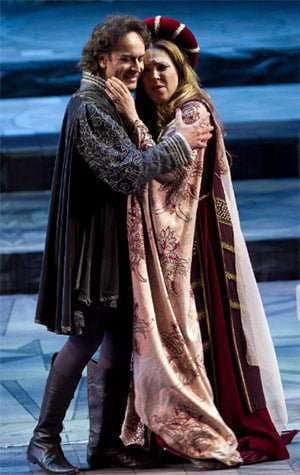 There are occasional drawbacks in Bussotti’s methodology, which Vittorio Borrelli’s reconstruction doesn’t quite disguise. The whiff of fin-de-siècle decadence that clings to the ornate trappings of power is more appropriate to Boito, whose imagination was in essence Baudelairean, than to Verdi himself. And we could occasionally do with a bit more naturalism and subtlety in the acting, which deploys sparse gestures and is at times as stylised as the designs. Extraordinary though much of this is, some of it is too static for comfort and we are closer in places to tableaux vivants than to continuously flowing drama.

The production’s slightly tarnished beauty finds its counterpart in a performance that mingles great refinement with occasional variability. Noseda is a wonderful Verdian, and the score unfolds as a breathtaking single arc of music that contains everything perfectly proportioned within it. It has all of his trademark intensity, though the melancholy reflectiveness of the work is echoed in a spaciousness that is very different from the visceral, hurtling momentum of his recent Rigoletto with the LSO at the Barbican.

Details and gradations of mood are beautifully honed and registered. We hear the slosh of the sea as its movements underpin Amelia’s reflections on past unhappiness and present desire. Boccanegra’s recognition of his daughter has a tremulous excitement that grasps at the ambivalent nature of both revelation and rapture – altogether very different from the lingering approach of many interpreters at this point. The council chamber scene seethes with a repressed violence that seems to echo down through the rest of the work, and the final scene brings with it an awareness of wasted lives and opportunities that is desperately sad. There’s no mistaking Noseda’s rapport with his Turin orchestra, either. Its playing balances elegance and refinement with profound emotional warmth and throughout there is that sense of the momentous in the air, familiar to anyone who has heard his work in Manchester and London. 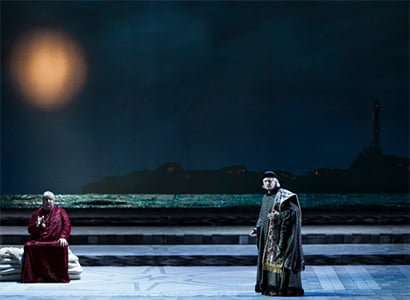 The integrity of the evening was all the more striking given that there was a last-minute hitch that could have unbalanced it. The production runs with two casts, of which we were to hear the second, though the indisposition of Giacomo Prestia, scheduled to sing Fiesco, led to his replacement by Michele Pertusi, his opposite number from the first. Pertusi was also due to sing the role the following night, and in order to help him pace himself, Noseda inserted an additional interval after the Prologue. It didn’t upset the momentum of the performance for a second, and vocally, Pertusi’s Fiesco, sonorously sung and bristling with blinkered pride and hauteur was one of the great things in it.

Alberto Mastromarino’s Boccanegra, however, proved altogether more equivocal. His tone can be dry, his delivery clipped. Some things elude him. He convinces as the careworn Doge, but not as the sensualist of the Prologue. “Plebe! Patrizi! Popolo” doesn’t command as it should. Yet there are also compensating flashes of brilliance and insight. His final “Figlia” in the recognition scene, with a sudden and unexpected crescendo through the second syllable, exposes a whole world of joy, confusion and bewilderment. “E tu, ripeti il giuro”, hurled at Devid Cecconi’s creepy Paolo in the council chamber, is terrifying in the extreme.

Gianluca Terranova’s Garbriele Adorno, meanwhile, is thrillingly impressive in a big-voiced, none too subtle way. The real vocal honours, however, belong to Erika Grimaldi’s Amelia. She is only 25, and her voice is already quite remarkable, with a warm, steady beauty in the tone that reminds of the young Mirella Freni. It’s a generous sound, too, that soars easily through the big council chamber ensemble, which she caps with a dreamy trill, perfectly negotiated. There is genuine greatness here already together with the potential for a major career, should she wish it, and provided she doesn’t do too much too soon. Between them, she and Noseda ensured this occasionally imperfect evening was also the most fascinating performance of Simon Boccanegra that I’ve heard for some time.