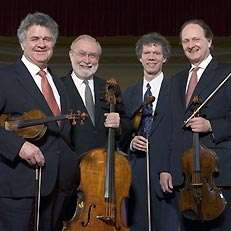 Thirty-eight years since its formation at the Marlboro Festival, the Vermeer Quartet stands on the brink of retiring from performance duties, with this BBC Lunchtime Concert the ensemble’s final appearance in London. Yet while the musicians’ playing, both technically and as an ensemble, was honed beyond reproach, their response to Schubert’s early quartet in particular left the listener with the feeling that something was missing.

Schubert wrote approximately ten string quartets between the ages of thirteen and sixteen: bright, unassuming works with an abundance of melodic invention and no little humour.

While the scherzo of D87 skipped merrily forward there was little evidence to be found elsewhere of that youthful freshness, the Vermeer preferring a more serious and studied interpretation. The first movement was warm but over-polite, the scherzo’s trio a missed opportunity for more extreme variations of dynamics.

Shmuel Askenasi found a sweet tone for the slow movement, and its second theme in particular, where his octave unisons with Mathias Tacke were precise. The finale found more impetus in its scurrying accompaniment, but only provoked half a smile rather than a full grin.

By nature the second quartet from Mendelssohn’s Opus 44 set is more serious, and there was a notably more-incisive urgency to the Vermeer’s playing in the first movement, the trading of melodic ideas well executed – particularly in the powerful approach to the closing bars.

Again, though, while the scherzo found technical excellence there was a shortfall in charm and lightness, though this was almost redeemed by an unexpectedly humourous touch at the throwaway close. The slow movement suffered from thicker textures, and while Askenasi’s portamento technique won’t have been to all tastes, cellist Marc Johnson’s solo was softly poised in response.

Elsewhere the Vermeer’s approach tended to be vigorous, with a clarity of texture that impressed as the finale began, enabling the themes to come through the contrapuntal texture, but remained rather staid. Only on the approach to the coda was there a hint of a smile, with viola and cello in a noticeably more affectionate duet.

A shame, then, that two vibrant examples of the early Romantic string quartet repertoire were not always portrayed as such.