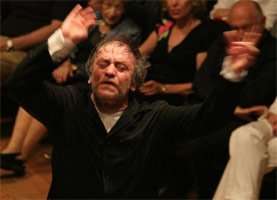 Valery Gergiev is a cult figure. His name sells any concert and breeds the expectation amongst some that everything he does must be good. This was the second of two London concerts with the Vienna Philharmonic. The first had disappointed – I agree totally with my colleague Douglas Cooksey’s assessment of it – but this second one, this time with antiphonal violins, was an improvement.

Not that the opening piece augured well; the poetic and dramatic Overture to Verdi’s opera “La forza del destino” was rushed through with little integration of themes.

Then Yefim Bronfman (rather than Gergiev’s ‘usual’ pianist Alexander Toradze!) was the soloist in Prokofiev’s ‘scandalous’ Piano Concerto No.2. Bronfman, a seasoned performer in this music, succeeded in hammering home most aspects of it while eschewing seductive lyricism. His first entry was muddled but he triumphed in the first-movement’s outsize cadenza, after which the entry of the brass was more chilling than could reasonably be expected and the clarity of the trombones was impressive. Many details were lost in the fleet second movement due to Gergiev’s manic approach. In the ‘Intermezzo’ Bronfman circumvented the conductor and responded directly to the orchestra, the strings cutting their opening responses to sinister effect. Amidst the demonstrative finale further sensitive playing was evident with supreme lyricism from Bronfman in the folksong-like music and the orchestra soothing its way, too. Bronfman offered an encore, a Sonata by Domenico Scarlatti.

There have been some superb accounts of Tchaikovsky’s ‘Pathétique’ Symphony in London recently, Riccardo Muti and the Chicago Symphony Orchestra being superlative. Gergiev got there, too. Almost! This was a performance that travelled. We were taken through difficult paths and tricked by the exuberance of the marching rhythms in the third movement before being made to stare into the darkest of abysses, the ‘vocal’ shaping of the finale Adagio lamentoso coming straight from the opera-house.

The slow-burn of the symphony’s opening measures (superb bassoon solo) laboured sufficiently before cheer banished melancholy thoughts and the full-bloom of the familiar Romantic theme. This was the ‘creation of theatre’, the Allegro vivo given with great power and drive. The 5/4 ‘Waltz’ got off to a quick start, with not much ‘grazia’, but cellos were soon being seductive.The ‘March’ was carefully sculpted and there was no holding back at the close, like a rollercoaster out of control, after which, thankfully, there was no thoughtless applause: for the opening of the Adagio was particularly stark and the second climax threatened to tear itself apart, such was the vociferousness. The depths then plumbed brought out astonishing emotions leading (noisy air-conditioning aside, which needs to be addressed) to extended silence.

The encore – even though not needed – was ‘Rose Adagio’ from The Sleeping Beauty. Very slow! A second encore seemed ready, but Gergiev declined.