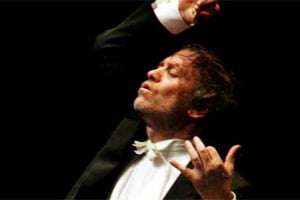 In the first in this weekend’s three-concert series by the Vienna Philharmonic at Carnegie Hall, Valery Gergiev conducted a program of large-scale French works by Berlioz and Debussy along with the Prelude to Wagner’s “Tristan und Isolde” and the purely orchestral version of Isolde’s ‘song of death’.

A more generous than usual selection of orchestral excerpts from Berlioz’s great dramatic symphony, Roméo et Juliette – lasting nearly and hour – took up the first half of the program. Conducting without a baton or score, the highly energetic Gergiev – his feet left the podium at some of the more rousing passages – hit all the high points but secured less than brilliant playing in a reading that was often too loud and too fast. There were too many moments when the delicacy and brilliance of Berlioz’s luminous orchestration were obscured by the orchestra’s heavyweight sound. Despite the incandescence of the VPO’s famous strings and some poignant sounds from the woodwinds, this was ultimately disappointing reading, lacking real warmth and drama.

Also less than satisfying was the passionate ‘Prelude and Liebestod’ from “Tristan und Isolde” in which Gergiev pushed the orchestra to play with tremendous intensity. The VPO strings again displayed their phenomenal power and luminosity, successfully evoking the yearning and ecstasy in Wagner’s music, but overall – as in the Berlioz – speed was a critical issue. The predominantly fast tempos taken by Gergiev robbed the Prelude of an appropriate build-up of tension, and never allowed the music of the Liebestod to open up and speak for itself.

Debussy’s La mer was also delivered with mixed results. There were some inspired, atmospheric touches, notably the pianissimo opening and the second movement (‘Play of waves’), both played with great evocative feeling, and a haunting sense of color. The third movement Dialogue of the Wind and the Sea – full of capricious gusts and angry, turbulent waters – generated excitement. Here, it was the windswept rondo theme on woodwinds, in counterpoint with the brass, which stole the show. Overall, though, the performance was overdriven and lacked the natural ebb and flow essential to the piece.

The Viennese bonbon that the orchestra offered as an encore, a high-spirited polka, Vergnügungszug, Opus 281, by Johann Strauss II, came as something of a shock and felt inappropriate after the intensity of the Wagner and the tempestuous waters of the Debussy.