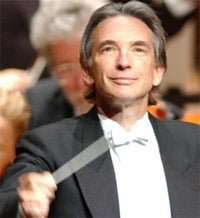 You wonder how concerts are put together. The Vienna Philharmonic’s return to the Southbank Centre after a few years’ absence has been made something of, so it seemed unusual for the evening to include one of the longest of piano concertos and with a soloist who had played it only seven months ago at the Proms and also previously in London. Nevertheless, for the Shell Classic International series, Yefim Bronfman, the VPO and Michael Tilson Thomas, conspired a magnificent performance. If Bronfman is not the most illuminating of pianists, here he was particularly thoughtful of phrase and dynamic, and technically patrician. In this grand concerto (assigned the wrong opus number in the programme, 67 is String Quartet No.3), the performers allowed time and space to integrate the work across its whole. Bronfman gave us Brahms’s Brahms, the important orchestral solos, from horn and oboe, were all poetically taken, and the lucid account enjoyed authority, strength and, in the finale, joie de vivre, Bronfman at his most debonair and affectionate, the tempo agreeably relaxed. In the preceding slow movement Tamás Varga’s cello solos had been particularly sensitive (and thanks to MTT having the violin sections sat antiphonally, Varga was adjacent to the pianist, which is surely what Brahms intended) and found Bronfman rhapsodic and rapt, a chance to dream, and the highpoint of a vibrant traversal, as much a success for the orchestra as for the pianist. 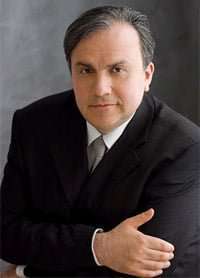 Absent from the RFH for a only a little over four years, during which time it has been a regular at the Barbican Centre and the Proms, with conductors such as Haitink, Maazel, Rattle and Mehta (it was the latter who also led the most-recent SBC appearance), the VPO is no stranger to London, but travelling with Schoenberg’s music is quite rare, and the Theme and Variations (1943) is even rarer. As orchestrated from the original wind-band piece, and first heard in 1944 courtesy of Koussevitzky and his Boston Symphony Orchestra, Theme and Variations is an engaging work and was given a particularly fine outing here, all of the inventive and contrasting ideas and kaleidoscopic scoring relished to present music that although recognisably by this composer also suggested Korngold, the ‘Seven Veils’ of Strauss’s Salome and, most intriguingly, Charles Ives’s First Symphony.

Having heard Schoenberg and Brahms as themselves, we then had them both entwined in the former’s 1937 orchestration of the latter’s G minor Piano Quartet, the first of three such works. Very simply, Schoenberg revered Brahms’s music and felt that this piece was not as often played as it should be, so made an orchestral transcription to give it wider currency, colloquially known as ‘Brahms’s Fifth Symphony’. Whatever the situation back then, Brahms’s version is now a secure part of chamber-music literature, but that doesn’t lessen Schoenberg’s respectful and sympathetic scoring, full of life and colour, and for all his additions never masking the essence of Brahms’s creation.

As orchestrated, this is an MTT speciality – he conducted it from memory – the VPO responding innately with a sound and address that we recognise as Viennese. If the VPO and Michael Tilson Thomas are a recent coming-together, they responded well to one another, the conductor wanting the orchestra to be itself, the musicians bringing their own tradition to music that even re-dressed remains their own. The large-scale first movement was gloriously unfolded, the intermezzo that is the second was a mix of shadows and sunshine with the succeeding Andante an ardent outpouring; if the decorative twists and turns are Schoenberg’s the emotions are Brahms’s. Maybe Schoenberg goes too far in colouring the finale, ‘Rondo alla Zingarese’ – all that percussion! – yet it is nevertheless great fun, and Rainer Küchl’s violin solos were fizzing and seductive. Throughout the orchestra that he leads had sheen and depth, and a vitality and identity that brought the music alive. Given the gypsy nature of Brahms’s finale, there could only be one encore, his Hungarian Dance No.1, and here it was, Brahms orchestrated Brahms (from the piano duet). MTT played it straight (more or less), such a refreshing approach after the years of encore-abuse it has received from other conductors!