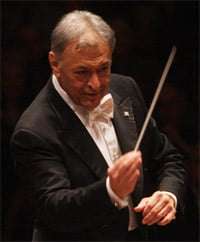 For the first of their four Carnegie Hall concerts this season the Vienna Philharmonic, as well as Zubin Mehta and Lang Lang, generously donated their services to present a special non-subscription event to benefit the National Academy Foundation, an organization serving 50,000 high school students in more than 40 US states.

Judging by the prolonged applause after the first movement of the Chopin, this performance attracted more than the usual New York audience. For anyone who had never experienced Lang Lang, this must have been a visceral, exciting performance. A highly theatrical artist, he seems to aim for transmitting music by playing the instrument as well as acting out the emotions physically. Unfortunately he exaggerated on both counts, rendering the first movement almost unrecognizable. Whereas Chopin marks only slight variations of tempo, Lang Lang started manipulating it from the very first entrance, which was markedly slower than Mehta’s rather fast opening speed. As they have just recorded this work together, one imagines that this was a deliberate statement on both their parts. Throughout the movement Lang Lang at times slowed down to almost half-speed, as for the second theme, and took quite a few other liberties, obviously trusting the conductor to follow him down any twisted path. And follow he did, at least as far as ensemble is concerned, but while Lang Lang seemed to stretch things mainly to luxuriate in the more lyrical aspects of the work, Mehta countered with muscular, almost brutal tuttis.

The second movement turned into a most lyrical, rhapsodic aria, something an orchestra as experienced in the opera pit as the Vienna Philharmonic accompanies instinctively. What was missing though was any real pianissimo. The most satisfying movement was the finale, which does not allow for much deviation from a regular pulse. Lang Lang mixed things up with odd voicings, sometimes completely covering the figurations of his right-hand with booming bass notes. He then offered Chopin’s Grande Polonaise brillante (Opus 22) as an encore. He certainly has one of the most impressive techniques and used it to full effect, if occasionally over-pedalling, effortlessly tossing off blazing octave passages.

The concert had opened with the Overture to Wagner’s “Rienzi”, played with style, and for the most part managing to avoid the bombast one often hears. After the interval the Vienna Philharmonic played its signature repertoire of Johann Strauss II. One of the waltzes, Wo die Citronen blüh’n!, had never been performed in Carnegie Hall. No other orchestra in the world can lay claim to play these works as authentically, with grace, a sweet string sound, just the right amount of lilt, and the famous slightly anticipated second beat accompaniments. Mehta took a leisurely approach to the polkas, and altogether seemed to greatly enjoy toying with the orchestra, indicating off-beats, down-bow here, up-bow there. If there was a high point, it was the Emperor Waltz, starting with a whisper, and featuring beautiful solos by principal cellist Franz Bartolomey. There were two encores, Hellmesberger’s Leichtfüssig, and Eduard Strauss’s Bahnfrei Polka, with Mehta blowing a whistle.