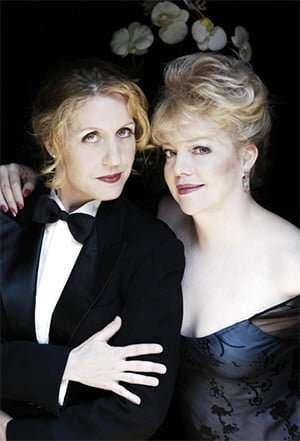 Two of the most accomplished exponents of the art of cabaret, K. T. Sullivan and Karen Kohler, have joined forces for a stunning act which combines ace material as they trace the transition from the luscious strains of Viennese operetta to the cynically blunt and biting sprechgesang of the politically-conscious Berlin of the 1930s. Though Sullivan’s sweet soprano is particularly suited to lilting music such as The Merry Widow (she does full justice to ‘Vilja’ and the Waltz), her passionate delivery of ‘Pirate Jenny’ from The Threepenny Opera is a dramatic knockout. Kohler is a specialist in German material, and together she and Sullivan embrace an astounding variety of material – their duets are particularly exciting.

Sullivan is the first to appear, her shimmering black gown complementing her striking blonde appearance, clasping a glass of wine as she warbles the delightful ‘Wien, Wien, nur du allein’, composed by Rudolf Siezyński in 1914, when the place it celebrates was about to lose its ‘city of dreams’ appellation. The English lyrics were by Kim Gannon (who thirty years later would write the words for ‘It can’t be wrong’, the theme from the Bette Davis film Now, Voyager). The salute to Vienna is followed by ‘Mein Herr Marquis’ (Adele’s laughing song) from Johann Strauss II’s Die Fledermaus. Sullivan has playful fun with it. Though composed in 1874, the English lyrics sung by Sullivan are by Howard Dietz, a former MGM publicist known for the many standards he wrote with Arthur Schwartz. Sullivan and Kohler generously give full credit to the talented lyricists who made many numbers more accessible to international audiences.

When the statuesque Kohler appears, she is elegantly attired (shades of Marlene Dietrich) in a man’s black tuxedo. She is in fine form, her vibrant solos including the racy ‘Attila the Hun’ (Rudolph Nelson & Jeremy Lawrence), a lascivious but witty account of her secret pleasures. Looking wonderful together, they combine for the first time with an audacious number, ‘Wenn die beste freundin’ (When the special girlfriend), music by Mischa Spoliansky and English lyrics by Jeremy Lawrence. The original words were by the prolific Marcellus Schiffer, and the song was introduced in a 1928 revue by Dietrich and a girl-friend, the famed Margo Lion, who married Schiffer the same year.

Schiffer (with Spoliansky & Lawrence) wrote two other outstanding numbers heard during the evening, ‘Ich bin ein vamp’ and the witty, tongue-twisting ‘Maskulinum-Femininum’. The singers mention that the themes of gay rights and same-sex marriage were prevalent in the Berlin of the 1930s, and they are reflected in some of the material. Friedrich Hollaender is another composer whose work is celebrated – like Spoliansky, he composed for films in the USA. Early work showcased includes ‘Ich bin von Kopf bis fuss auf Liebe eingestellt’ (Falling in love again) which became a trademark number for Dietrich, and ‘Muenchhausen’, while later songs include another written for Dietrich, ‘Illusions’.

Jed Distler gives fine support at the piano as part of an evening full of fine songs, playful, bitter, cynical and lilting, a rich feast indeed and a sterling salute to the ground-breaking days of cabaret.