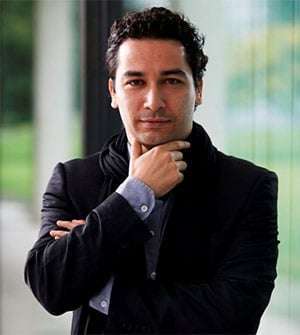 Barely five weeks after his Royal Festival Hall debut with the London Philharmonic Orchestra (with whom he will take up the position as Principal Guest Conductor in 2015, after conducting Don Giovanni at Glyndebourne this summer), where he started with Kodály’s Dances of Galánta, Andrés Orozco-Estrada was back in London with the very same opener. This time he brought his Vienna orchestra, the Tonkünstler, at nearly the half-way point of an extensive UK tour. As readers may have heard, the Birmingham concert the night before this London one was broadcast live from Symphony Hall on BBC Radio 3 (with John Lill as soloist).

Orozco-Estrada obviously loves the Kodály, and – once again – it really does show. And it is an ideal piece to show off his players, with distinctive horn and woodwind calls at the very outset proving that the Tonkünstler is full of individuals. There is a satisfyingly reedy, nasal sound from the bassoons instead of the more-usual rounded sound we hear, and the distinctive timbre of those special Viennese oboes. The five double basses impressed too, especially in the ‘Pastoral’.

One of the up-and-coming younger generation from the New World, Orozco-Estrada has an infectious enthusiasm and a swooping left hand that can scoop the music up and propel his players onwards, a pleasing visual addition to the concert-going experience and much used in the gentle speeding up of the Kodály. With Barry Douglas commanding in Rachmaninov’s First Piano Concerto (curiously listed as Opus 19 in the programme, which is the Cello Sonata), Orozco-Estrada and his musicians ensured that the piece came together cohesively, even though it was Douglas’s power that dominated. He made amends in the encore – not immediately recognisable to this listener – more Rachmaninov (a quieter Prelude or an Etude Tableau I wondered, or a late Brahms Piano Piece). Whatever it was, it was a nicely judged antidote to Rachmaninov’s youthful spirits.

The immediacy of the sound was at first rather overwhelming. By the Beethoven – in this lyrical, loving performance – I enjoyed Orozco-Estrada being my guide on a rather idyllic country visit, which even the ‘Storm’ couldn’t adversely affect, being followed by the ‘Peasants’ Hymn’ for which the trombones continued to keep their powder dry. Responsive and flexible this was a ‘Pastoral’ that matched another one in this Hall a few weeks ago – in John Lill’s penultimate recital in his complete Beethoven Piano Sonata cycle – in its generous and relaxed music-making.

It’s unlikely we’ll see Orozco-Estrada with the Vienna Tonkünstler in London again (he stands down next year, before taking up his LPO position), but thankfully we’ll see him again regularly in London. The Beethoven was not the end of the concert. There was an encore in the shape (sound?) of Johann Strauss II’s polka, Leichtes Blut (Opus 319) – as light as its title suggests, and as joyous as the Beethoven that had gone before it.