Another attempt to make probably the most accessible opera even more accessible, this one in the Village Underground space in Shoreditch, just outside the City of London. The Vignette Productions staging, directed by Andrew Staples, was described in the press release as an “immersive experience”, set in “post-apocalyptic” Paris, where the population is being ravaged by a deadly virus. Cue a rag-bag of visual and aural dystopian effects – surreally distorted, naked mannequins, lots of extraneous video monitor screens (always a reliable dystopia stand-by), someone in disease-proof overalls testing the audience for the virus as we made our way into the performing space, along with a pervasive soundtrack, booming out all the time Puccini’s music was not being played and doomily reminiscent of the Terminator films. 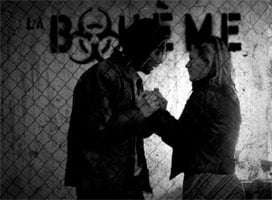 Well, yes, dear, enough already, the point is well and truly got. Emphasising the sickness factor in Bohème didn’t really do the opera any favours in terms of heightened relevance; and for all the fuss involved in rearranging our folding seats as the action moved down one side of the space (requiring annoyingly long gaps between Acts One & Two and Acts Three & Four, covered by more blasts of dreary, doom-laden music), Andrew Staples’s concept of the piece felt decidedly clipped on to what turned out to be an otherwise thoroughly engaging performance, certainly one that musically put that other ‘accessible’ Bohème (from OperaUpClose) in the shade.

The four students were all sharply drawn, with a bruiser of a Marcello from Matthew Strange, sung with great passion and bluster and very visceral in his on-off affair with Musetta. He really connected with the part and with the audience. There was a hint at the start that Alistair Digges was finding Rodolfo a bit of a stretch, but he soon hit his stride in a magical Act One duet with Mimi, and he was a real heartbreaker in Act Three. His tenor was graceful (if a bit on the light side), and so far as one could tell in the generally dim-to-impenetrable lighting, he looked grungily sensitive and romantic. He also managed that all-important upping of Rodolfo’s game in ’O soave fanciulla’ with considerable power. Richard Latham (Schaunard) and Timothy Dickinson (Colline) completed the blokeish quartet in style, with Colline (cast as an ex-soldier) delivering a fine farewell to his coat. In general the cast seemed impervious to extremes of cold.

Keri Fuge vamped it up rotten as Musetta in the pared-down Act Two, and her merciless teasing of Marcello raised a few much-needed laughs. You’d hardly describe Ilona Domnich as frail-looking, but her Mimi was finely sung and acted – and she made a beautiful sound. She was at her considerable best in Act Three, where she’s in quarantine (which mysteriously she isn‘t for her Act Four death scene, but never mind), and that other emotional trigger, when she sings ’O mia vita’ as she realises that her death is imminent, worked its pathos ruthlessly.

Steven Moore’s conducting was excellent, encouraging fine playing from the 15-strong orchestra, and giving a spacious and dramatic reading of Jonathan Dove’s elegant reduction of the score. Just as impressive was Moore’s natural engagement with the singers, so that the music really flowed. In the name of relevance, again, the subtitles were interpretative of the Italian rather than literal – hence lots of “whatever”, “wanker” and countless other examples of out-reaching demotic-speak – but these and the clunking production aside, the opera, especially at a time when people’s minds were rather focussed on young lives and talents being brutally and tragically cut short, did what it should do.