In his programme note for this concert, which took place on an especially balmy Antipodean evening, Richard Tognetti quotes Islamic art specialist and Art Gallery of WA director Stefano Carboni’s book Venice and the Islamic World, 828-1797: “The artistic consequences of the dynamic relationship that Venice forged with its Islamic trading partners, especially the Mamluks of Egypt and Syria, the Ottomans of Turkey and the Safavids of Iran, were felt over nearly 1000 years.”

And continue to be felt in the ‘crossover’ approach to early and world musics taken by such musicians as Jordi Savall and Christina Pluhar. And, indeed, Tognetti and the Egyptian-Australian oud virtuoso Joseph Tawadros, who together with the latter’s brother James on percussion, formed the nucleus of a concert which saw Vivaldi’s Four Seasons interspersed with vibrant compositions from Joseph Tawadros’s latest album Permission to Evaporate. 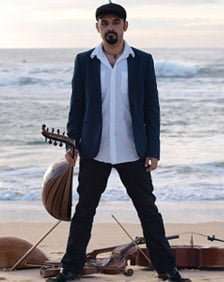 As a packed Perth Concert Hall discovered, with the Tawadros brothers — Joe flamboyantly attired, James more demure — and a line-up of ten ACO string players with harpsichordist and organist Neal Peres Da Costa and lutenist and guitarist Tommie Andersson on continuo duties giving us one of the most rhapsodic, lyrical, explosive and imaginative Four Seasons you’re ever likely to hear.

East-West connections were evident throughout the program, which kicked off with an antiphonal Sonata for three violins by Giovanni Gabrieli before alternating, in another form of antiphony, between Joe’s Arabic traditional, rock, jazz and blues-inflected originals as orchestrated by Tognetti and the four Concertos which comprise The Four Seasons.

The classic pear-shape of Joe’s oud echoed the shape of Andersson’s theorbo, essentially a large lute, which instrument, and its name, is derived from the oud. Joe’s florid improvisations and elaborations of composed material echoed Tognetti’s stylish embellishments of Vivaldi’s solo-violin lines, which Joe sometimes doubled or ornamented. The driving rhythms, often underscored by James on the tambourine-like riq or bendir (frame drum) of Vivaldi’s sequences and hypnotic repetitions echoed Joe’s repeated bass lines and hypnotic harmonies. Speaking of James, mention should be made of a stand-out solo improvisation on the riq which demonstrated not only his absolute mastery of the instrument but just how many colours can be drawn from such a seemingly simple instrument.

More fundamentally human connections came to the fore in such works as Joe’s moving “farewell waltz” Point of Departure, written in memory of his parents, and in fleshing out the descriptive qualities of Vivaldi’s Seasons. In terms of sheer visceral virtuosity however, it was in the stormy outer movements of ‘Summer’ and the intense finale of ‘Winter’ that the whole band cut loose, with Tognetti’s and Joe Tawadros’s lightning-fast passages and improvisations taking instrumental technique to its very limits while James Tawadros and the rest of the band obliged with equally dazzling feats of ultra-tight ensemble playing. This was a Four Seasons for all seasons.