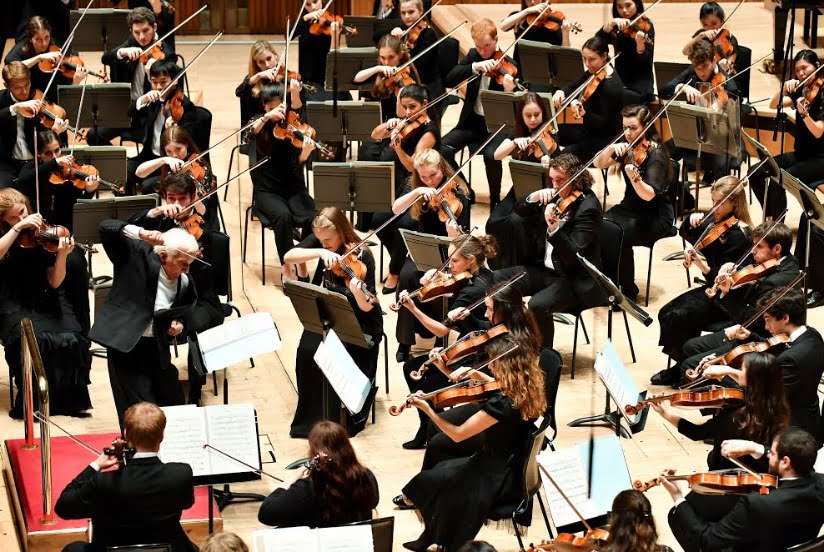 The Philharmonia Orchestra stepped aside for the latest instalment of its “Voices of Revolution” series, all conducted by Vladimir Ashkenazy (continues March, April, May), with the Royal College of Music students proving a perfect fit for this “Youth & Optimism” leg.

Ashkenazy, who turned eighty a few months ago, was as enthusiastic as ever – with smiles, nods of head and thumbs-ups of appreciation to these impressive RCM musicians. It was good to start with something that doesn’t get out much, music that Dmitri Kabalevsky (1904-87) wrote in 1938 for the Children’s Theatre of Moscow to accompany a play “recounting the hapless antics of a travelling clown troupe.” Allowing that Kabalevsky was deemed State-friendly in his writing, music for the people, one might anyway hear the occasional cipher in a score that at some points could pass for Shostakovich in ‘light’ mode, and Prokofiev in the closing movement (both contemporaries of Kabalevsky of course); but overall this is a beguiling and humorous score that includes the uproarious ‘Galop’ – cartoon music (familiar if a foxing number in a ‘name that tune’ quiz) – and, possibly coincidental, with reminiscences to pre-Revolution times and suggestions of Imperial Ballet, Glazunov’s Raymonda and Tchaikovsky’s Nutcracker. 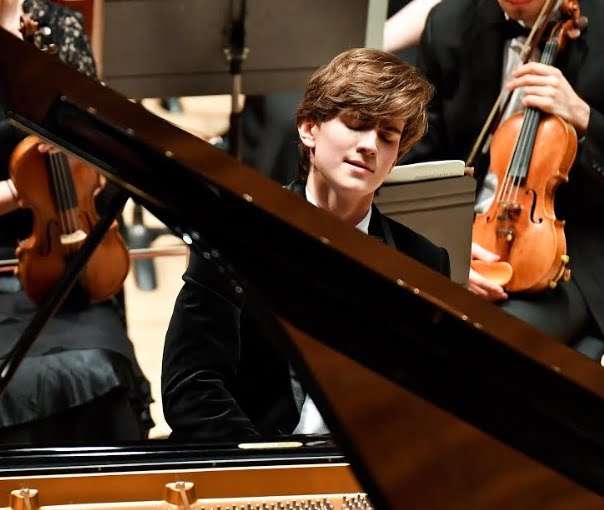 Step forward Daniel Kharitonov, tall and very confident, who took Third Prize at the 2015 Tchaikovsky Competition aged sixteen. He is currently studying at the RCM with Dmitri Alexeev. Kharitonov has technique in spades; he possesses speedy and accurate fingers and he can seduce with lyricism. His playing of Rachmaninov’s Opus 1 (well it was that number when he started this Piano Concerto in 1890 but he revised it in 1917) was of poise, dash and romance, and vividly accompanied, Ashkenazy (who knows the piano part as well as anybody) retaining the eight double basses. It wasn’t just about Kharitonov, for horn and bassoon solos caught the ear, although, his steely accuracy aside, the pianist found an appealing velvety and improvisatory touch in the slow movement, making it idyllic. Maybe the Finale was too sectional between its bravura and soulful moments, but certainly Kharitonov was too precipitous in playing an encore – as soon as he returned, a Rachmaninov Etude-tableau (the D-major Ninth from Opus 39), which emphasised the brash elements that had surfaced in the Concerto’s cadenza, but there is no doubting that his potential is tremendous.

At no instant during this concert did the RCM Symphony Orchestra betray its student status; and in Shostakovich’s late-teens debut Symphony (the Revolution had happened just a few years previously) the playing was assured and dynamic. One can hear seeds being sown for the composer’s later sardonic and acerbic utterances; more importantly the individuality and innovativeness of the music is remarkable. Ashkenazy kept the first movement rhythmically tight and dryly humorous, and launched into the second with boldness – which might be heard as silent-film chase music (a moment for pianist Irena Radic to shine) and kept the exotic ‘trio’ (if it is one) on the move: it can so easily sag. With the restless expression of the slow movement, opportunities for those on oboe, cello, violin and muted trumpet were taken with distinction (this may be a Symphony but it is scored as a ‘concerto for orchestra’) and Ashkenazy kept a firm grip on the multifarious Finale without denuding its “schizophrenic” (programme note) nature, although the timpani intervention could have been more of a dire summons, and built it to a blazing coda. All in all, this was a fine showcase for the RCM as well as being musically satisfying.