Wars of the Three Kingdoms 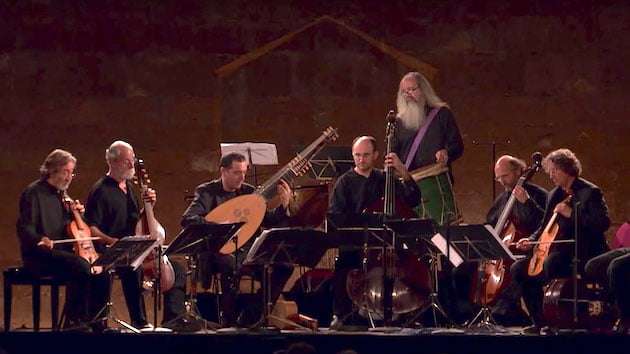 Belying a title (“Wars of the Three Kingdoms”) that looked as if it was straight out of Game of Thrones, Jordi Savall’s return to the Queen Elizabeth Hall – embarking on its first full season since its prolonged refurbishment – was mostly a rather intimate and sombre affair, with court compositions for up to five viols offering solace from war rather than any musical reportage from amidst the heat of battle.

The three kingdoms in question are those that would later be fashioned as the United Kingdom – England, Scotland and Ireland – but which, in the sixteenth- and seventeenth-centuries, were in a constant state of warring flux, culminating in the English Civil War that toppled (albeit briefly) the monarchy and saw the demise of one of our composers – William Lawes – shot by a Roundhead in 1645, and mourned by no-less-than Charles I as “the Father of Musick”.

So it was something of a ‘coals to Newcastle’ programme that Savall brought, a collection that would work just as well on disc, with such an eye-catching title. It brought together well-known and lesser-known composers and, with an audience that respected the flow of the programme, only applauding after a sequence of pieces, effortlessly transported us back some four centuries.

Whether intentional or not there was some mathematical symmetry going on – three kingdoms, five viols, multiplied together into fifteen pieces. Dowland set the tone with his Pavan a 5: Lachrimae from 1604 – probably written at his house in Fetter Lane almost exactly opposite the Queen Elizabeth Hall on the Thames’s north bank. Holborne’s earlier galliard The Tears of the Muses led into two pieces from William Brade’s 1617 Hamburg publication of Masque dances: Mohrfield and, with distinctive drone and lilting melody, Ein Schottishe Tanz.

Despite his name, Alfonso Ferrabosco (the son) was born (and died) in Greenwich, and was represented by his Dovehouse Pavan, followed by an Orlando Gibbons pairing. There followed Suites by Matthew Locke and William Lawes which were mirrored from both composers in the concert’s second half, separated by three of John Jenkins’s pieces and followed by Henry Purcell’s Fantasia in F ‘Upon One Note’.

Lawes’s two Suites (in C, then in G-minor) are in three movements, starting with a ‘Fantazya’ (sic), before a slow central movement and an ‘Aire’ to end, while Locke’s from Consort of Flower Parts are in four movements

All of this was exquisite. Savall and his fellow viol-players – Lorenz Duftschmid (altus & bass viols), Sergi Casademunt (tenor viol), Juan Manuel Quintana (bass viol), Xavier Puertas (consort bass) – sat in a semicircle in front of Michael Behringer’s chamber organ (and, more occasionally, harpsichord), with Puertas’s bass the central point, instruments rising in pitch on either side (when Duftschmid opted for altus rather than his bass viol). They make music in the most unfussiest of manners. At the end, Savall introduced the first of two encores with a happy reminiscence of his first Queen Elizabeth Hall appearance, in 1970, with harpsichordist Rafael Puyana. William Brade’s much more upbeat Der Satyrn Tanz with its springy pizzicato opening alternating with the bowed section, was followed by music by Robert Johnson, who wrote music for Shakespeare, after which, with a departing wave, we had to make our way back to the twenty-first century.