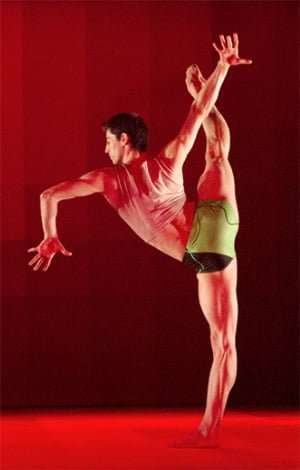 There is much to admire in Atomos, the new work from das Wunder Mensch Wayne McGregor, titan of both contemporary and Classical Dance in the UK. Here he is in contemporary mode, creating for his own company, Wayne McGregor/Random Dance. One of McGregor’s talents is to choose superlative collaborators, none more than lighting designer Lucy Carter and photographer Ravi Despres, who here create a setting of often breathtaking beauty and invention; the colour-palette shifts from browns to blues, purples to reds, the stage suffused with squares of subtly different hues and shades. It is a notable achievement. Additionally, McGregor teams with Adam Bryanbaum Wiltzie and Dustin O’Halloran, whose excellent A Winged Victory for the Sullen was played live by the composers and their collaborators, a mixture of live instrumental sound and electronic enhancement and distortion. It is atmospheric music, often hauntingly beautiful, sometimes almost distressing – a perfect choice for new dance.

Some elements of the design are less successful: the much-vaunted costumes by ‘fashion laboratory’ Studio XO do not seem anything special, variations of McGregor’s favoured tight-pants-and-top look. Additionally, half a dozen TV screens that descend to hover at varying heights above the dancers for the central section, and which require the donning of 3D spectacles, make little effect either. Random’s dancers, however, cannot be faulted – they perform the choreography with great finesse, artistry, and infinite flexibility; it is an impressive ensemble, working exceptionally well together while each dancer maintains his or her own individuality of movement quality. 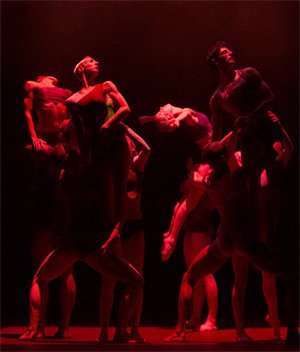 However, therein lies the rub: McGregor has a distinct view which he has explored with this company, The Royal Ballet and in countless commissions around the world. It has changed a little over the years – his contemporary style is now suffused with more balletic qualities – but for all its extraordinary virtuosity which demands dancers to explore the space around their bodies in lunges, swivels, spins and twitches, for all the dizzying variety, it remains monotonous. The reason for this lies in McGregor’s cool, cerebral, almost clinical, approach to the dancers – they move like automata set in motion by a modern-day Dr Coppélius but just like the doll Coppélia, they lack a heart.

There is a soulless, joyless quality to McGregor’s often-startling creations and here, in Atomos, which is meant to be an exploration of what makes a ‘body’, the dancers are reduced precisely to the state of bodies moulded into the shapes required by their choreographer. It is like a surgeon losing sight of the humanity inhabiting the body laid out on the slab before him, and why I sometimes admire McGregor’s works but can never love them. Added to which is his worrying preference, as shown in last summer’s turkey Raven Girl at Covent Garden (which at 75 minutes seemed to last a lifetime) of going on for far too long. Atomos finally heaves into the terminus 70 minutes after departure, and not a moment too soon because, unlike Kenneth MacMillan and Jerome Robbins who, with Song of the Earth and Dances at a Gathering, respectively, had a plethora of things to say with their dance, McGregor does not or, at least, nothing which is understandable – ensembles, trios, duets and solos follow one after another without the audience understanding why. The physicality is impressive, but without meaning or humanity, it is not enough.