“Composer Gottfried Huppertz and film director Fritz Lang were frequent partners in the creation of German cinema of the Weimar period: their most famous collaboration was on Metropolis (1927), Lang’s masterpiece of epic expressionist science-fiction storytelling. Set in a city of the future (in 2026), Metropolis is lauded for its imaginative flair in depicting a nightmarish mechanized-industrial future. Its warning about society, equality and the nature of the city itself reflects the instability and concerns of the Weimar age.” [Philharmonia Orchestra website] 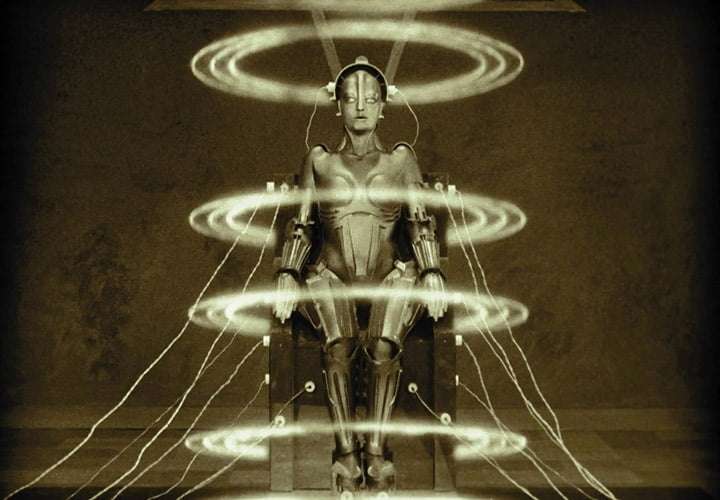 The soundtrack of Fritz Lang’s Metropolis has frequently been the source of controversy, not least in 1988 when Giorgio Moroder supplied his own electro version with the help of Adam Ant, Pat Benatar and others. The Philharmonia Orchestra and Frank Strobel here sought to set matters right by going back to the original version by Gottfried Huppertz used at the film’s premiere in 1927.

Huppertz had already provided Lang with a score for the two-part Die Nibelungen (1924) which was operatic in style with a Wagnerian leitmotif structure. Music was a significant component in Metropolis from the start and Huppertz was present during its making to play music to set the pace and mood for individual scenes. His ability to write music that both illustrated the action and created atmosphere was a major factor in the success of his films with Lang and hugely influential on the following generation of film composers such as Erich Wolfgang Korngold, Max Steiner, and Franz Waxman.

Huppertz (who died in 1937) conducted for the film’s premiere in Berlin and subsequently published a piano score for regional and smaller cinemas, and there was even a set of gramophone records produced of the orchestral score with a spoken introduction by Lang. 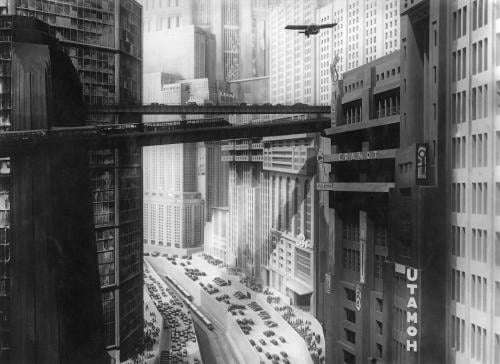 The film itself is one of the masterpieces of silent cinema and one of the greatest of all German movies. It is also the first blockbuster. There is a clear line from Metropolis to Blade Runner (1982) and even Alita: Battle Angel (2019). There was great pre-publicity about the film’s budget (over five-million Reichmarks), the length and complexity of the shoot and the visionary nature of the design and visual style. It was German cinema’s attempt to take on and beat Hollywood. It failed at the box-office despite several revised versions being produced for different markets, yet has a level of technical achievement and visual splendour that is exceptional even in the age of CGI, and also created the dystopian thriller and invented the cyborg in the figure of the robot Maria. The creative contribution of Thea von Harbou, Lang’s wife, has often been undervalued as she wrote the screenplay and the original novel on which it was based. Despite its frequent sentimentality and political naivety, it has an impressive scope and imagination. In particular, she took pains to incorporate the dramatic impact of musical effects into her script.

Metropolis was given a new lease of life in 2008 when an extra twenty-seven minutes of previously lost footage was discovered in Buenos Aires. It was then possible to recreate over ninety-percent of the original. This is particularly important as Huppert’s various versions and his working copy of the screenplay were preserved but difficult to match to truncated versions of the film. Strobel worked on the different sources to create a performing version of Huppertz’s score which was premiered at the Berlin Film Festival in 2010.

It was fascinating to see Metropolis again in the form in which it was originally intended with the score conducted by Strobel. The print was of uneven quality due to the different sources involved but the additional minutes give the film a new rhythm and greater coherence. Images of pistons and clocks dominate the opening. Moloch, the man-devouring machine that drives the city, is dominant. Magnificent skyscrapers stretch into the clouds. The two worlds of the modern Metropolis with the governing elite indulging themselves in leisure pursuits above ground and the workers oppressed by spirit-shattering labour and dwelling in the underground city are clearly delineated. Parallels with the sweatshops of Asia and Latin-America serving the rampant consumerism of the West seem obvious. These two worlds are linked by Freder Fredersen, son of the city’s creator, and his love for Maria who is a Messianic figure for the workers. Maria has been recreated in robot form by the mad scientist Rotwang to lead the workers into anarchy. 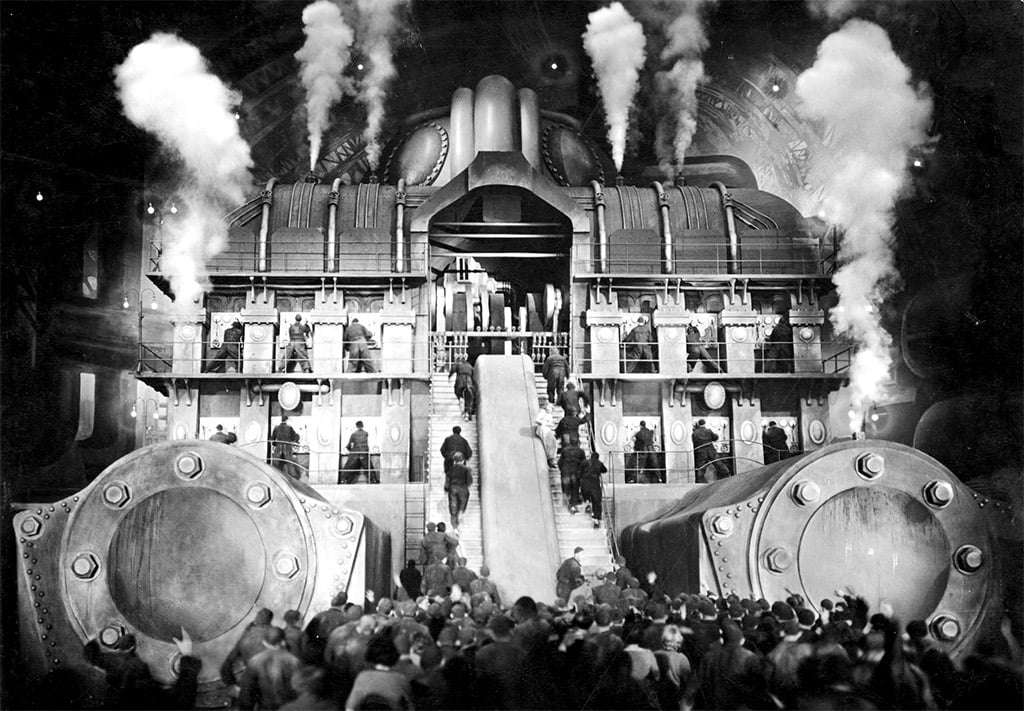 Lang’s vision of the mechanised city of the (then) future is brilliantly realised and the film’s influence not just on other filmmakers but on the writings of the philosopher Martin Heidegger seem convincing. Lang marshals his vast resources with a great feeling for architecture and figures within an urban landscape. He often makes his impact through the creation of striking tableaux rather than through editing and montage as in the films of Eisenstein. The robot Maria is a frankly misogynist creation with her erotic perfectionism that releases the worst in men but is dramatically effective. It’s a film of rising temperatures, boiling liquids, explosions and inundating floods as well as a surprising lyricism. The crowd scenes and the final Götterdämmerung are thrillingly realised.

Seeing the film again I was struck by how much Christian imagery it contains. Maria recounts the Biblical story of the Tower of Babel with obvious parallels. Her name evokes the Virgin Mary and she leads a revivalist meeting for the workers in the catacombs of the city. Feder is seen reading from the Book of Revelations and could be construed as a Christ-like figure. Several scenes take place in and outside the cathedral and crucifixes and religious iconography are given prominence. The film’s denouement begins at the cathedral door. It is as much a Christian myth as it is a dystopian vision.

It is not just a film of incredible directorial vision, for the performances are impressive. Brigitte Helm, with her chiselled features and piercing eyes, is stunning as the two Marias, remarkable for an eighteen-year-old making her first film. Her incredible physicality and command of gesture is striking. She differentiates between the good and bad Marias through body language, as well as killer eye-shadow. Much of the criticism of the film revolves around Gustav Fröhlich as Freder Fredersen and his hyperactive, scampering portrayal. He was not first choice and was only cast when another actor was fired by Lang. He is not helped by his costume of white silk shirt and plus- fours but he radiates an eager sincerity and is a good foil for Helm. Rudolf Klein-Rogge gives the crazed scientist Rotwang a Faust-like quality and Fritz Rasp is suavely reptilian as the henchman Slim. 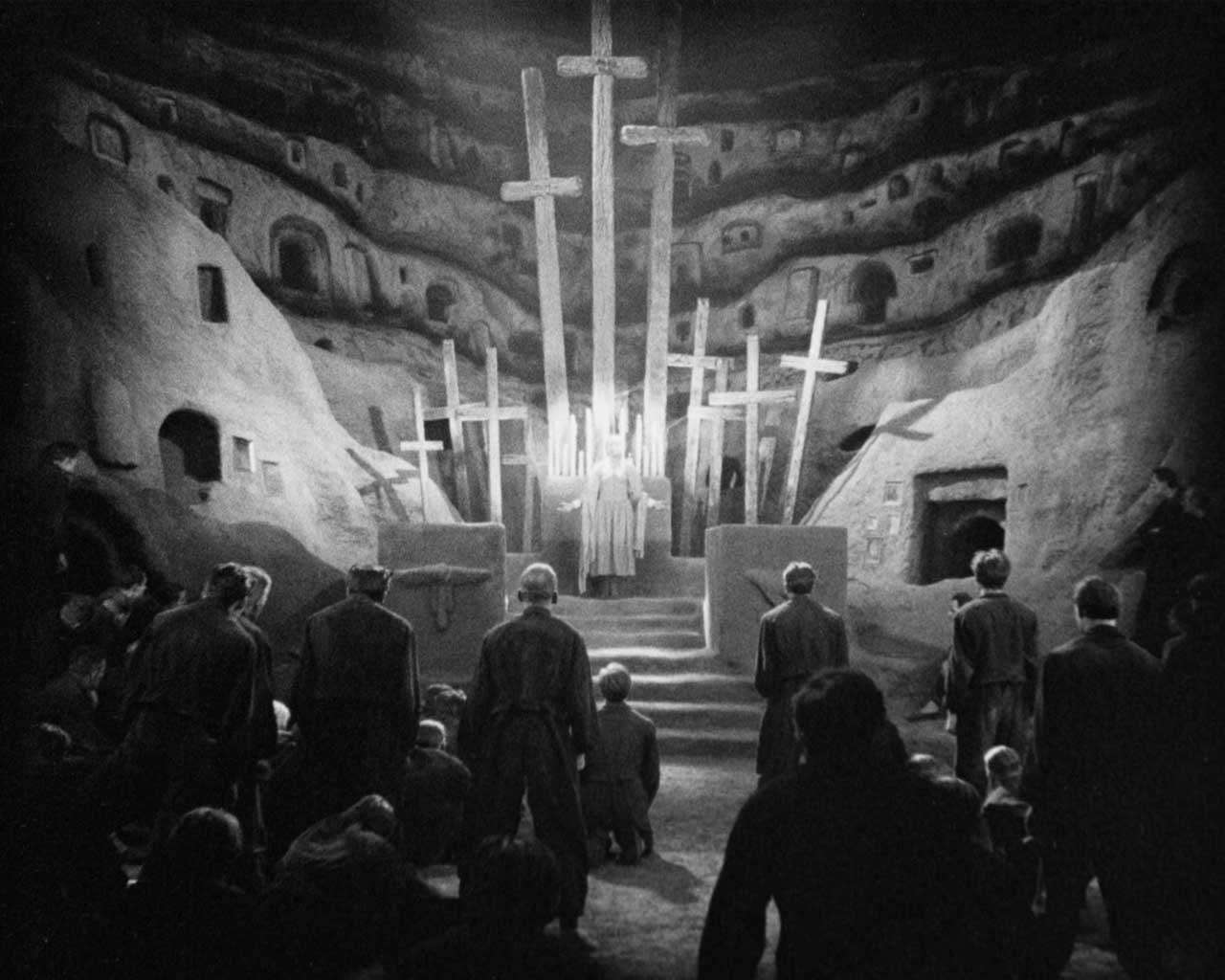 Huppertz’s score in its fullest form is a mammoth effort which tries to provide a symphonic structure, calling on leitmotifs and musically is in the style of Richard Strauss’s Frau ohne Schatten. Sometimes popular dance music is used as with the wild partying at the Yoshiwura nightclub (with a brief glimpse of Huppertz himself playing the violin). A Viennese waltz accompanies the elite at play in the Eternal Gardens. Fearsome power is conjured to describe Moloch and there is an austere grandeur for the scenes in the cathedral. Sometimes there is pastiche, and the final fight scenes on the roof of the cathedral are accompanied by a violin tremolo rather than the anticipated orchestral mayhem. It is an impressive, effective, score that is musically rather conservative, particularly in comparison with the scores of Edmund Meisel for Eisenstein’s Battleship Potemkin (1925) or Walter Ruttman’s Berlin Symphony of a Great City (1927) with their selective use of atonalism. Frank Strobel drew superlative playing from the Philharmonia Orchestra. The film’s timeless warning about the perils of technological progress without social justice was undoubtedly enhanced by the additional footage and the restoration of the original score.

Prior to Metropolis, the Philharmonia in its free/informal Music for Today series played two short works by the Czech composer Martin Smolka. The first was Hats in the Sky to Hans Richter’s classic experimental collage film Ghosts before Breakfast (1928) where hats fly through the air, hosepipes suck water in, and men (including Darius Milhaud and Paul Hindemith) disappear behind lampposts. Smolka’s score catches the film’s Dadaist tone and sets a trio of trumpet, trombone and cello against a background of percussionists. The film was shown twice and in between Smolka’s En tractant was similarly anarchic with a rampant percussion section and trumpeters, trombonist and cellist adding football rattles, kazoos and harmonicas, and undeniably attractive.