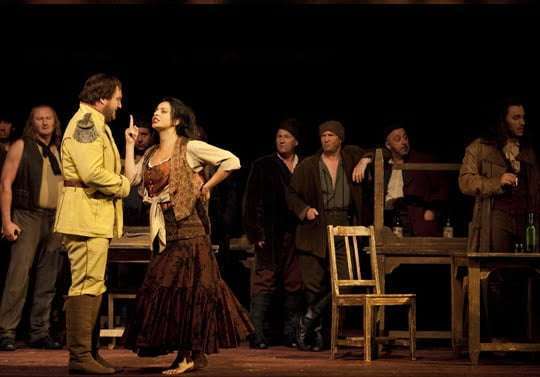 Patrice Caurier and Moshe Leiser’s 17-year-old production of Carmen has been revived many times. The clever designs make it adaptable for touring. However, regular revivals can bring an element of routine. This performance revealed passages that were either becoming so or where rehearsal time was perhaps lacking. There were also those aspects that stood out strongly in relief where the production, singers or orchestral playing made one think about facets afresh.

One of the strengths of the staging is that the original directors aimed to accentuate the Opéra-Comique origins of the work. There is a welcome lightness of touch, and humorous moments of the spoken and sung are brought out, with the help of surtitles it must be said. The drollness of Cárthaigh Quill’s Le Remendado being an instance, and likewise the Frasquita and Mercédès when reading their fantastical fortunes in the cards; also the use of the chorus to involve the audience as if it were part of the crowd. Alas though, all this seemed to be at the expense of the weightier moments of the drama – or was this simply that the principals were not the best matched? 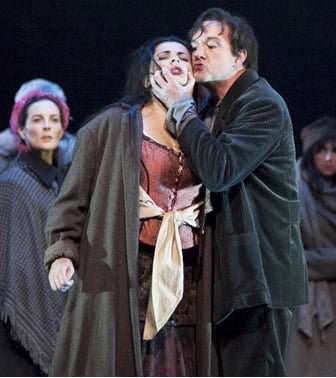 Alessandra Volpe’s Carmen proved rather one-dimensional and not terribly loveable or even likeable. At her first appearance she was very much the extrovert, overtly calculating predatory gypsy, and she remained so throughout. There was little enigmatic about this Carmen, and that should be part of the allure for Don José and all her other admirers! Volatility, also part of the character’s make-up, was also lacking. Volpe displayed a strong flexible voice, although with rather too much use of chest voice. The best moments were her fatalistic presentiments of Act Three, where the fantastic orchestral playing of the horns and lower strings in particular, really helped. Her death was somewhat perfunctory though. Peter Wedd’s Don José was likeable enough, though sparks did not really fly between him and the gypsy and he was not the dangerous psychopath of some interpretations. He had all the notes and sang with innate musicality, but the slightly covered quality of his tone does not make him an ideal tenor of the French repertoire tenor.

The Micaëla of Jessica Muirhead was another matter altogether – the stage lit up on her every appearance. She made one realise how contrasted Micaëla can be compared to those around her, and how strong Bizet’s music for her is. Her Act Three aria was the highlight of the evening. She spoke the dialogue well and was entirely convincing as an actress.

Simon Thorpe’s Escamillo was lacking in the necessary swagger (except at his curtain call) and vocal charisma – the tessitura of the role does not reveal his voice at its best. In the smaller roles Aidan Smith made more of Zuniga than one would have thought possible, and Emma Carrington’s Mercédès gave notice of a future Carmen. The Chorus was in great form, and the street children sounded suitably earthy!

In the pit there were good things going on, in the more-romantic passages especially. Elsewhere James Southall drove some of the music too much and with some metronomic inflexibility. Carmen’s ‘Habanera’ suffered from this, and perhaps Volpe’s interpretation did so too. Southall was, however, always singer-friendly in terms of control of dynamics and elicited some beautiful playing in the entr’actes.