Rossini
Mosè in Egitto – Opera in three Acts to a libretto by Andrea Leone Tottola, after the play L’Oriside by Francesco Ringhiere [sung in Italian with English surtitles] 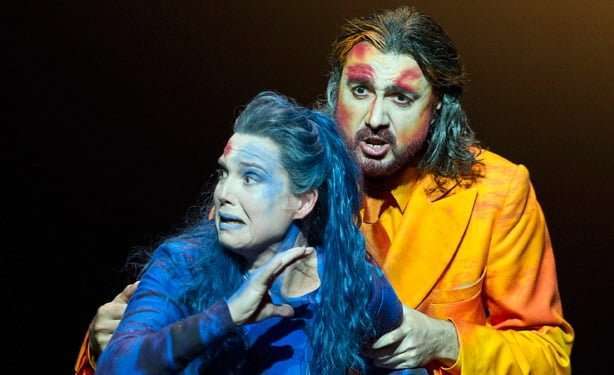 Rossini’s Mosè in Egitto gets relatively few staged outings, although the title role has attracted basses of renown, particularly Ruggero Raimondi, who for many years kept the part in his repertoire and recorded it, Claudio Scimone conducting. It’s not the most dramatic piece, but when a cast as strong as this has a chance to explore it in depth… For the most part David Pountney’s production allows the singers the freedom to exact the most out of their respective parts.

The opera commences with Egypt experiencing its plague of darkness. Pountney follows this literally with the stage black, the pit lighting subdued and with Carlo Rizzi conducting with a luminous baton. All well and good for a few minutes – but this lasted until God saw fit to restore light. It therefore took a while to identity the protagonists. Once we were able to see, the staging proved minimalist but adaptable. Two huge movable scaffolding-backed screens, one blue (Hebrew territory) and the other red (Egypt) set the scenes well, and eventually became the device by which the parting of the Red Sea was depicted, with the aid of a blue silk drape. Costumes, wigs and face-paint splashes generally followed the same basic colour scheme.

The plot follows the biblical narrative; the romantic interest provided by the Pharaoh’s son, Osiride, being in love with Hebrew girl Elcia. He cannot declare this to his father, over whom he otherwise has strong influence. The Pharaoh’s wife Amaltea is broadly sympathetic to Moses and the plight of his people, but also jealous of her son’s hold on her husband. The conflicting emotions come to the fore, the composer taking opportunities to mix voices, such as in the big quintet that occurs shortly after light is restored in Act One. (Sadly, that was ruined by those in the audience who scrunched loudly sweet-wrappers.) 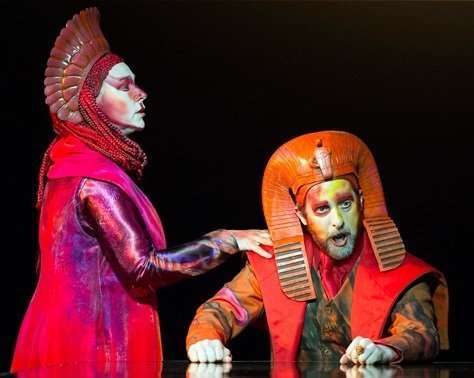 WNO’s cast is pretty fine. In the title-role Miklós Sebestyén fielded a warm, solid yet fluid bass, and acted the single-minded prophet with conviction. There was evidence of superb breath control in his final utterances before the parting of the Red Sea. The interpretation was welcome for its restraint and musicality. Osiride was sung by David Alegret. It’s a tricky role – fiendishly high and demanding of much vocal agility. He coped well, although the sound of his reedy tenor is not always ingratiating and sometimes lacked a bit of heft. Andrew Foster-Williams was a sterling Pharaoh, his increasingly powerful and incisive baritone sounding great. Barry Banks made his mark as a supportive and wily Aronne (Aaron) and Nicky Spence did what he could with the High Priest.

The ladies were just as impressive. Christine Rice demonstrated, once again, that she knows how to hold a stage and project a character. Her velvety mezzo becomes more so, but the voice is also developing darker colours, which she deploys to great effect. Her coloratura was precise and thrilling. Leah-Marian Jones, as Amenofi, made an impact way beyond the material. Finally, but certainly not least, we had Joanne Boag in the role of Elcia – deputising for an indisposed Claire Booth, and giving a most accomplished piece of singing and acting. Boag has a lovely voice. Her decorative singing was beautiful and she gave the impression that she’d performed the part often.

Carlo Rizzi led an assured account of the score, always attuned to the action. The playing was good although some woodwind intonation was a little wide of the mark at times – but a minor quibble in a rewarding evening of excellent music making.