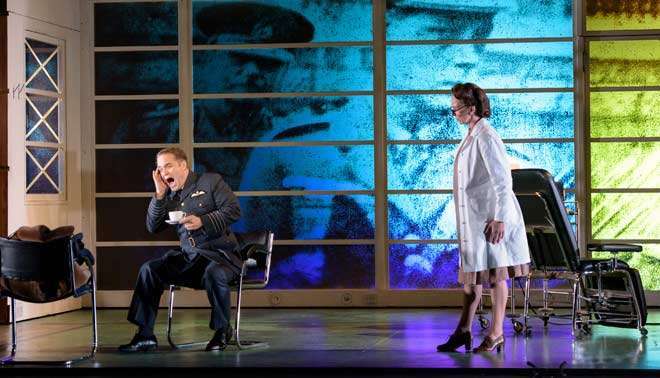 It is paradoxical that madness, one of the most inscrutable characteristics of humankind, is so often the premise for more rational analysis through artistic forms such as opera, and rarely so incisively treated as in Handel’s Orlando (based on a work predicated upon the very idea, the Renaissance mock-epic Orlando furioso).

At one level Harry Fehr’s new production for Welsh National Opera seeks to sanitise, for want of a better word, the condition of madness by interpreting it as a modern medical condition apparently susceptible of treatment, and setting the stage-work in a hospital in the 1940s. And yet the war-time choice of that era makes ironic the thrust of Zoroastro’s advice (here he is turned into a doctor) that Orlando may find a cure for his mental instability in the heroic deeds of battle, persuasive and unassailable as Daniel Grice’s portrayal was. The presentation of the theme of conflict between love, duty and war is further complicated and made provocative by a series of images projected in Act One of Edward VIII and Wallis Simpson, and a single one of their meeting with Hitler.

With Medoro cast as a fellow patient, the jealous Dorinda as a nurse, and being in the hospital throughout, this perhaps becomes somewhat claustrophobic, but the virtue of that is to suggest the mental confinement of Orlando’s internal ordeal, and so the director’s concept runs neatly parallel to the original. 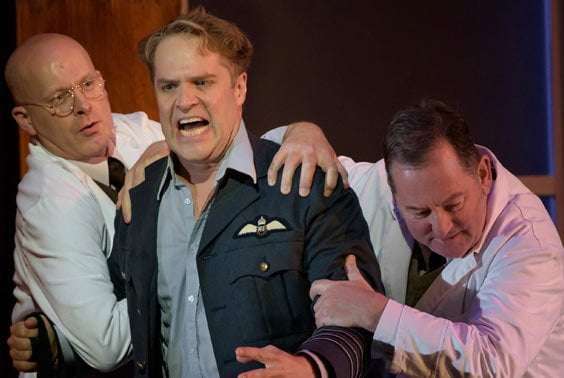 Lawrence Zazzo gave a finely controlled account of the character’s descent into mental derangement, with his acting convincingly indicating the latter, but his musical presentation remained clear and focussed, allowing Handel’s settings to speak eloquently of Orlando’s inner state. Already in Act One Zazzo evinced a nervous excitability, pointing ahead to the ‘mad scene’ at the climax of Act Two. In contrast, his (successful) rival for Angelica’s affections, Robin Blaze was level-headed as Medoro with his typically youthful-sounding, seamlessly delivered lines. At times his characterisation lacked some drama, and his moving aria in Act Two ‘Verdi allori, sempre unito’, uncharacteristically faltered in intonation. But he was spot-on in the roving lines of the Act One aria.

Rebecca Evans’s Angelica was also very strong, but ultimately not quite distinctively characterised to make us appreciate how both Orlando and Medoro should be so enamoured of her in the first place. She could have evinced more ravishing simplicity in the first part of the duet she performs with Medoro in Act One (which is, tellingly, related thematically to music Handel had composed in his early oratorio, Il trionfo del Tempo e del Disinganno, and which he would re-use in the latter’s English revision as the final aria ‘Guardian angels, oh, protect me’). Fflur Wyn successfully negotiated her coloratura with coquetry and panache, as well as a nod towards the strain of tragedy in her unfulfilled love for Orlando.

The generously-sized WNO Orchestra provided essentially weighty support on modern instruments, but with a generally brisk and vigorous lead from Andrew Griffiths, informed by ‘period’ practice, which resulted in a sensible compromise between the two approaches to the realisation of Baroque music. Particularly, with sturdy continuo grounding, it was reminiscent of Charles Mackerras’s interpretations of Handel.

Overall, this was convincing proof, were it needed, that Handel opera is no longer the preserve of specialist ensemble, but can be rightly regarded as the cultural currency of mainstream companies, and the most imaginative of directors.