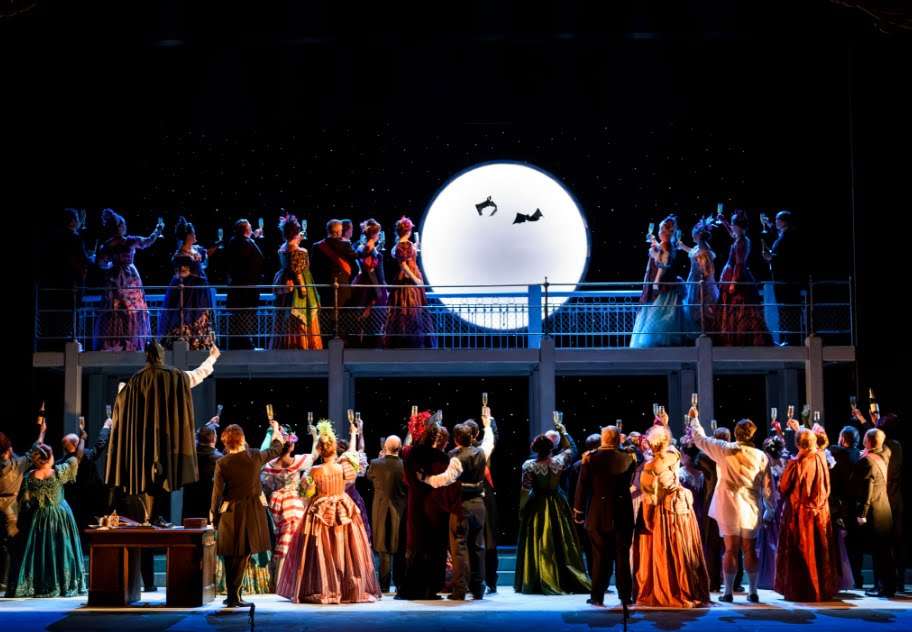 Welsh National Opera rounds off its current tour with the light-hearted Viennoiseries of Johann Strauss II’s most popular operetta. It is often thought of as casting a satirical light upon the social high-life of the Austro-Hungarian Empire’s capital and John Copley’s production does that, but somewhat clumsily. The setting and the dress are more redolent of the very end of the nineteenth-century than the 1870s when the operetta was written, but the portrait of Emperor Franz Josef which adorns the jail in Act Three shows the stern, bearded and bald figure of the years immediately preceding the First World War. But there is otherwise no indication of the Viennese fin-de-siècle – of the era of Freud, Mahler, Schoenberg, the Secessionists, Robert Musil and so on – that is, an era about to end dramatically.

To the extent that it is satirical, the English translation of the text by David Pountney and Leonard Hancock – although witty – often employs a sort of twee Sullivan-like humour and innuendo, as does John Copley’s spoken dialogue, and there are some rather camp carryings on for Acts One and Three in particular. Steve Speirs’s scene as the gaoler, Frosch, also rather descends to pantomime, with some old jokes, for all that he engaged the audience’s attention.

The production works better in playing up the work’s implied send-up of the conventions of more serious opera. Paul Charles Clarke hams up the role of Alfred (a tenor and singing teacher) well with his deliberate overdoing of his would-be Italian persona and accent, by announcing himself to Rosalinde as “not Alfred, but Alfreeedo” – presumably in reference to the tragic lover of La traviata. He opens the opera singing off-stage, like so many other Donizetti and Verdi heroes, and chips in at other points with quotes from other operas – such as by Puccini, whose career largely evolved after Strauss’s death. Joe Roche’s hapless lawyer, Dr Blind, is best understood as the same generic type also made fun of in Così fan tutte, with Despina’s disguise. Some of the choreography for Act Two’s ball and that undertaken ironically by the disguised Adele and Rosaline in the jail, owe something to Offenbach’s French operettas. 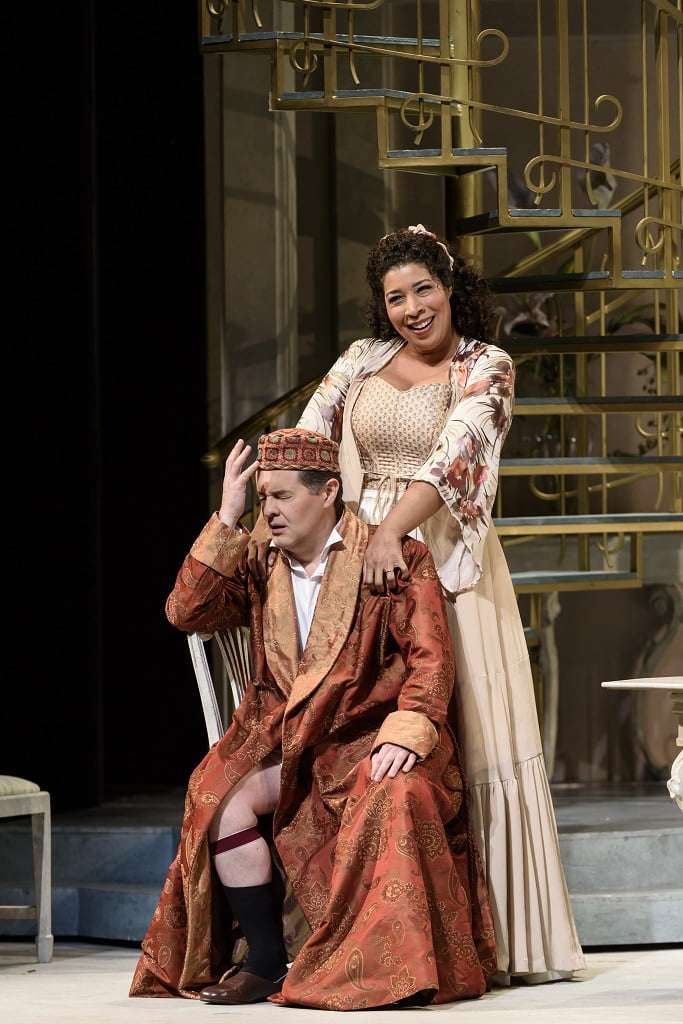 On the whole the singers are technically accomplished, and that goes a long way in the case of the soubrettish coloratura which Rhian Lois successfully tackles as Adele. However, overall, there tends to be a lack of sparkle and high spirits. Judith Howarth’s ‘Csárdás’ at the ball as a disguised Hungarian countess needs more spice and flair for the joke played on Eisenstein to be more believable, though elsewhere she bears a resolve and dignity fully worthy of that other long-suffering Countess in The Marriage of Figaro.

Mark Stone’s Eisenstein and Ben McAteer’s Dr Falke are both effective as the men about town whose past escapades are the cause of the farce that unfolds, as Falke seeks revenge upon Eisenstein for leaving him high and dry at the end of an evening in fancy-dress costume as the eponymous bat. But particularly in the dialogue they both incline to declamation which partly militates against razor-sharp delivery. Anna Harvey captures wittily the deadpan demeanor of Prince Orlofsky who claims to be bored with everything, and so hosts the party which witnesses the trick played by Falke and the prison governor, Frank, upon Eisenstein, but Harvey also then opens up musically in the bright rendition of the music given to her, including leading off the ‘Champagne’ song, one of this work’s signature melodies.

From the Overture, James Southall conducts an energetic account of the score, but it is also somewhat foursquare and so, like the production itself, tends to miss ideal vivacity. Brisk speeds and marking transitions to set-pieces do not, of themselves, sustain the right temper throughout, although the waltz-inspired ensemble of Act Two’s Finale is imbued with greater tension and warmth. In general the production is enjoyable enough, but echt– Viennese it is not.