André Tchaikowsky
The Merchant of Venice – Opera in three Acts and an Epilogue to a libretto by John O’Brien based on William Shakespeare’s play [London premiere; sung in English, with English surtitles] 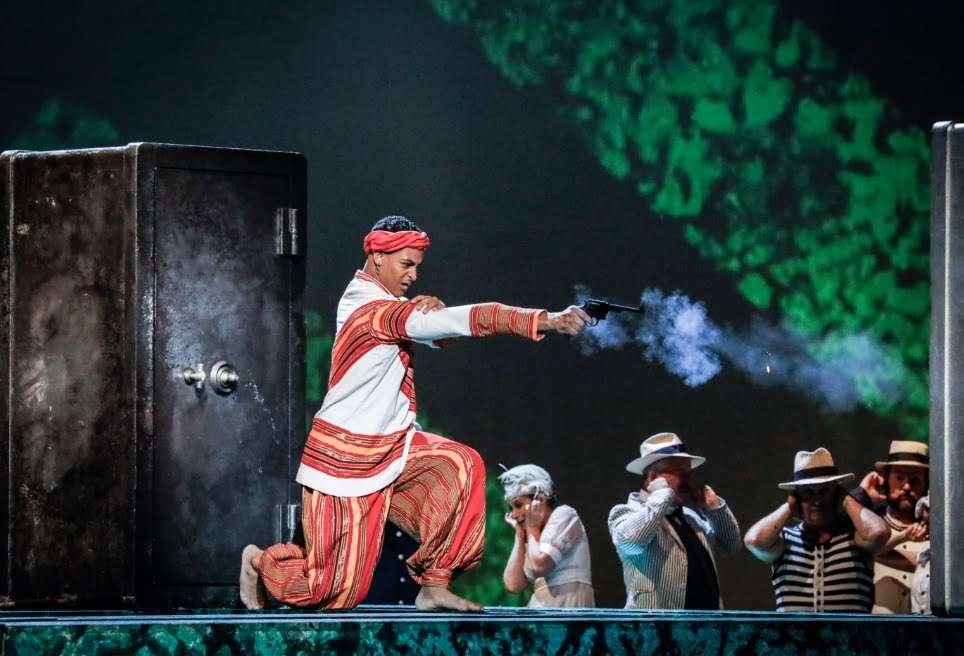 William Shakespeare’s play The Merchant of Venice, a comedy-drama, includes well-known characters such as Antonio (the merchant), Shylock (moneylender), Portia (heiress to a fortune) and the noble-of-birth Bassanio (the most successful love-wise of Portia’s admirers), and also some very quotable lines, examples include “All that glisters is not gold…”, “If you prick us, do we not bleed?”, “Love is blind…”, “The quality of mercy is not strain’d…”, and – inspiring Vaughan Williams to Serenade Henry Wood – “The man that hath no music in himself … Let no such man be trusted.”

The short-lived André Tchaikowsky (born 1935 in Warsaw as Robert Andrzej Krauthammer and who died aged forty-six in 1982 in Oxford, England) had plenty of music in him, and is best-remembered as a distinguished pianist (testified to through some fine recordings, wonderful Chopin Mazurkas are a notable illustration). As a composer, there is a handful of works, his magnum opus being this Shakespeare opera (lasting around one-hundred-and-fifty minutes, plus an interval), which he began in 1968 and virtually completed in the year of his death (Alan Boustead adding the few remaining bars). The Merchant of Venice was not staged until 2013, at Bregenz, and Welsh National Opera gave the UK premiere last year and now brings it to London for two performances. 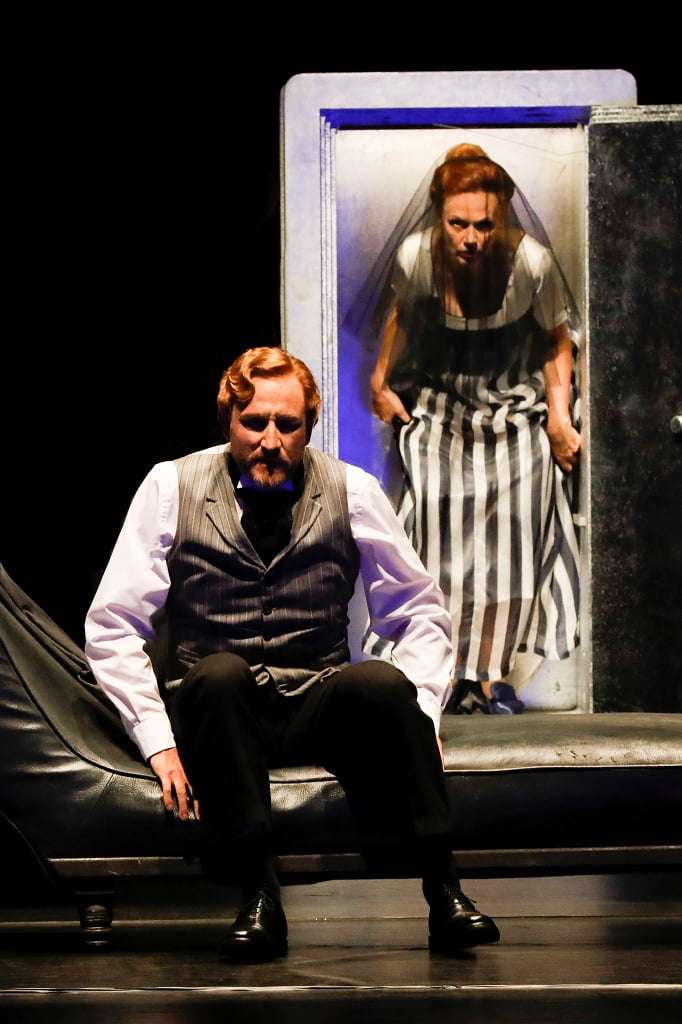 Tchaikowsky was steeped in Shakespeare, even to the extent of willing that his skull be donated to the Royal Shakespeare Company, asking that it be used as Yorick (the deceased court jester, alas) in productions of Hamlet, which it has been, as held by David Tennant taking the title-role. As for Tchaikowsky’s Merchant opera, it’s terrific…

Something briefly Freudian bookends this staging, with much in between to relish. The production is good to look at, with two moveable mausoleum-like objects dominating the first Act. Antonio and Bassanio are friends (rather more than that for the former, it turns out). The latter needs funds to pursue Portia. Antonio’s capital is tied up but he takes a loan from Shylock to pass to Bassanio, and in doing so agrees to unusual conditions should he default. Meanwhile Jessica, Shylock’s daughter, escapes her father’s tyrannical clutches and elopes with Lorenzo, stealing money and valuables in the process. Shylock is enraged, while Antonio is heartbroken at Bassanio leaving – both states expressed fully in the music.

Tchaikowsky’s score is colourful and characterising. consistently engaging. References, to various degrees, to Prokofiev, Britten, Tippett, Barber, Hindemith and (particularly) Berg might be apparent, and not forgetting Humphrey Searle, a vibrant disciple of the Second Viennese School (he studied with Webern). If this seems too eclectic a mix, then Tchaikowsky ensures a rigorous and seamless approach and avoids any charges of ‘thieving magpie’ composition. There’s wit, too, especially in Act Two when a bassoon is given a few notes of Beethoven (‘rescue’) and then Tchaikovsky (‘fate’) to reckon a smile from the listener. 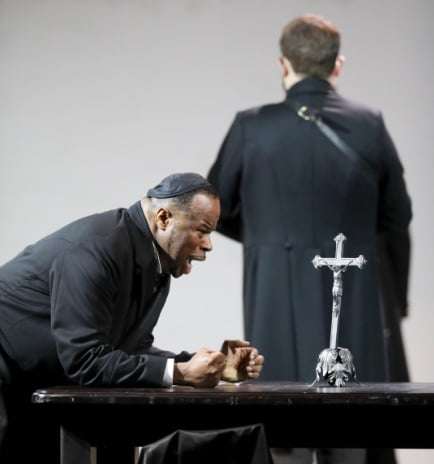 And in that second Act we meet the fair Portia living a film-star lifestyle, if longing for Cupid’s arrow – attended to by a butler and maids, and accompanied by her secretarial sidekick Nerissa. The music is alluring and the set handsome, including a symbolic maze, as royal hopefuls try and fail to win her hand (despite the Moroccan prince giving an athletic display). Bassanio does much better, as does Gratiano (Bassanio’s gentleman’s gentlemen) with Nerissa; she exhausts him! Jessica and Lorenzo arrive, so too a letter from Antonio advising that his ships and therefore his wealth are lost and that he must meet Shylock’s deadly demand.

Back in Venice for Act Three, Shylock remains anxious and angry – the orchestra makes this clear with an intense outpouring – whereas Antonio is dishevelled and forlorn. Cue the return of Bassanio, a musically ecstatic reunion. There follows an engrossing and dramatic hearing in front of a “your grace” who is keen that Shylock retracts his barbaric requirements, but he launches an impassioned defence, refuses the now-found monies, and prepares to undertake his own surgery. There arrives a “doctor of law”, a man. It’s the unrecognised Portia. With eloquence, to soul-grabbing music, she finds the caveat within the men’s agreement that “not a drop a blood” must be spilled … and it all unravels for Shylock: the Jew has lost to the Christians, Antonio is returned to riches if not, as he would wish, Bassanio. 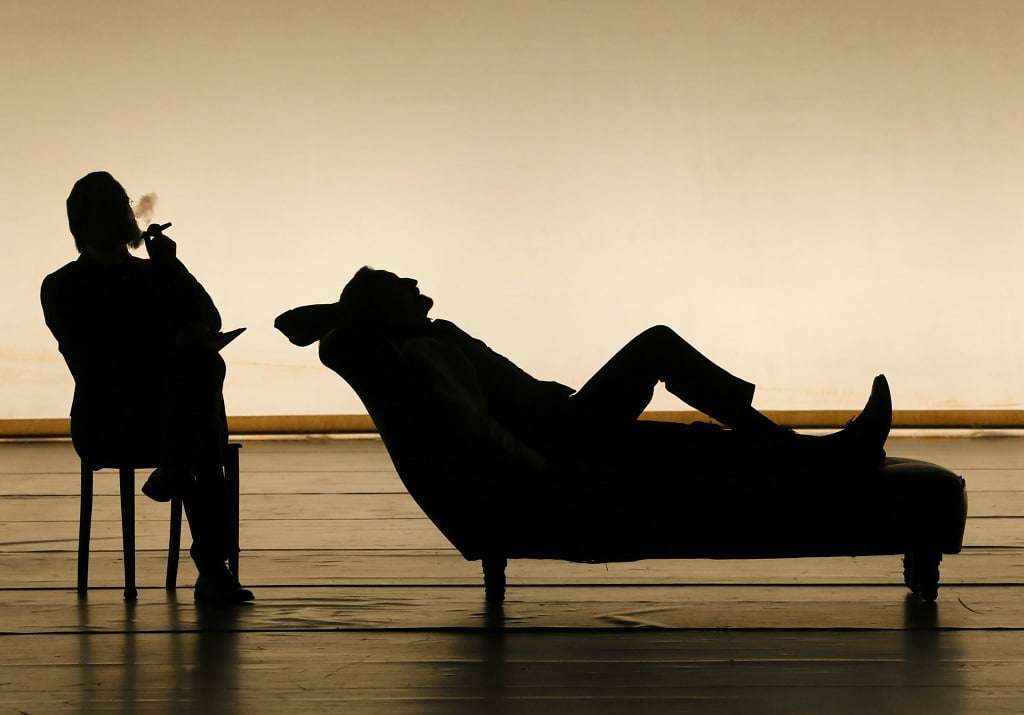 There follows a searing orchestral interlude that leads to the Epilogue – centred on lost and found rings – a nocturnal episode with a large moon as backdrop. This may be the theatrical weak-point of the opera, for all that Tchaikowsky’s writing remains deft and imaginative, although the very end, a warm chord fading into the dawn of a new day, is very effective and curiously poignant.

Much then to discover in this production that is well-managed and (in every sense) -choreographed. The cast is excellent, so it is invidious to pick out Lester Lynch’s dynamic Shylock and Sarah Castle’s inviting Portia, and maybe a little mean-spirited to mention that for all his artistry Martin Wölfel’s countertenor Antonio can be rather under-projected. The splendid members of the Chorus represent Venetian supernumeraries, and, in the pit, and out of it (there’s a brief episode in Act Two requiring a Renaissance ensemble that includes harpsichord, recorder and drum), the Orchestra of Welsh National Opera plays with skill and dedication under the assured conducting of Lionel Friend, a seasoned hand with music new, rare and complex.

If (like me) you have so far missed André Tchaikowsky’s Merchant of Venice – powerful, moving, involving, compassionate – there is another chance: so, grab a gondola to Covent garden and go see … well-worth the entrance fee, which is not Shylock’s “pound of flesh”. There is also a EuroArts DVD of the staging in Bregenz.