Prokofiev
War and Peace, Op.91 – Opera to a libretto by the composer and Mira Mendelson based on Leo Tolstoy’s novel [performing version by Katya Ermolaeva & Rita McAllister with a translation by the latter [sung in English, with English surtitles]

What is the difference between Russia and the (for-now) United Kingdom? Not everyone in the UK has read Tolstoy’s War and Peace, and Russians would have no difficulty in filling in the gaping chasms as the novel morphs into Prokofiev’s opera. David Pountney’s production for Welsh National Opera was first seen in Cardiff in September last year, and this massive, four-hour show touched down for its final two performances in London. 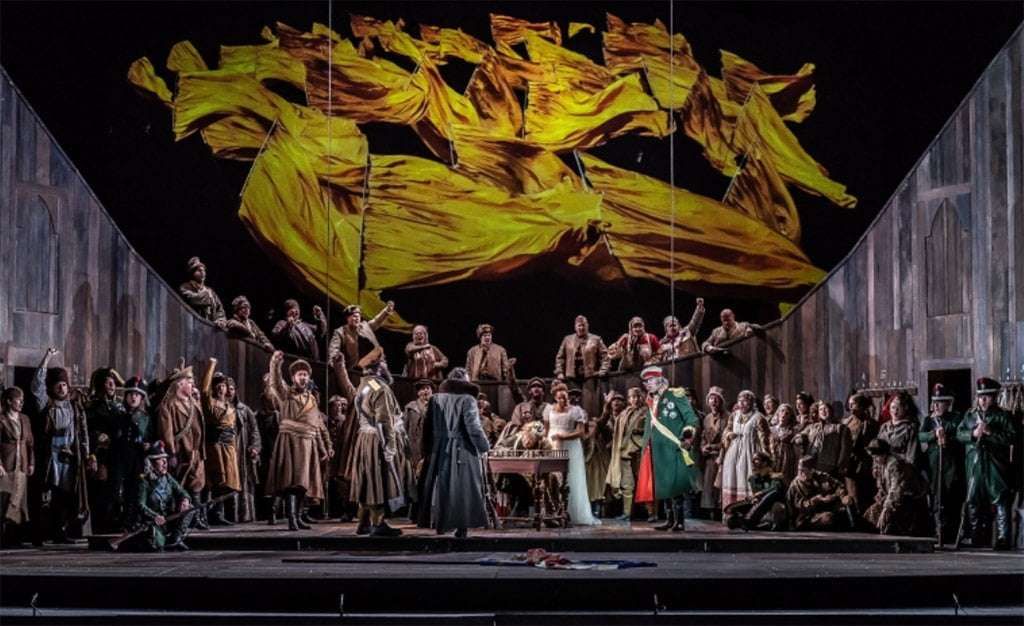 Much has been discussed in previous reviews on this website about the edition/version/compilation adopted for this production, which makes Bruckner’s problems with his Symphonies seem like a musicology starter-kit. Prokofiev started out with the idea of one of those grand, sprawling history epics – such as Prince Igor, Khovanshchina, or Boris Godunov (another edition minefield) – but then the project was hijacked for Soviet propaganda purposes, resulting in bombastic agitprop choruses. Pountney cut to this particular chase with scorching clarity by placing the Epilogue at the start, belted out by the spectacular WNO chorus ‘Les Mis’-style. Pountney’s main big idea is to conflate events at Borodino in 1812 and Stalingrad in 1942 (around the time the opera was being composed, with costumes from both periods mingling together), so we are always close to the notion of Russian patriotism, and patriotism in general, being throttled by totalitarianism, and he isn’t afraid in such a big-gesture production to include a slice of heroic, Soviet-realism ballet.

Pountney neatly underpins things by bringing Tolstoy on right at the start, writing his novel, part of the video projection, who ‘becomes’ Pierre at the same desk, right at the end, so that there is also a suggestion that if Tolstoy can move from aristocrat to peasant/man-of-the-people, then so can his characters. Robert Innes Hopkins’s timbered amphitheatre-with-gallery set both contains and opens out, and its adaptability depends on the rear cyclorama for the non-stop video-projections, with so much footage from the 1966 Russian film version of the novel that the music often comes across as a silent-movie soundtrack.

Yet Pountney feeds musical and visual values into the staging very successfully, covering the epic, wartime and intimate bases with impressive fluency – and Prokofiev has skills of incisive characterisation and instant mood-setting to match Tolstoy’s. It has always seemed strange that Prokofiev brings in his big tune (the Natasha/Andrei love-theme) so early and then exploits it as an emotional signpost, and the filleting of Natasha’s proposed elopement with corrupt Anatole to take up the bulk of the first ‘Peace’ part sags. The second ‘War’ component is more of a company show, with many vignettes recreating the desperation, heroism and military incompetence of the battle and the surrender of Moscow.

The cast is the same as for the first run and subsequent tour, with twenty-two singers taking sixty-two roles. Playing the three leads, Mark Le Brocq catches Pierre’s diffidence, bravery and charisma with his intense, searching singing; Jonathan McGovern’s Prince Andrei is a poetic ideal, as is his seemingly artless, authoritative baritone; and Lauren Michelle’s Natasha seems more of a blank canvas, although her soprano lacks nothing in innocence – Andrei’s and Natasha’s charged final scene, when Andrei dies from his wounds, is awkwardly staged. Adrian Dwyer perhaps overdoes Anatole’s whining deviance to the point of caricature, but he is very effective nonetheless, and it is a pity that his depraved sister Hélène, sung magnificently by Jurgita Adamonyté in a suitably scarlet gown, doesn’t have more to do, when you recall Anita Ekberg, stupendous on all fronts, stealing every scene she is in for King Vidor’s 1956 film. Simon Bailey’s philosopher/Field Marshall Kutuzov gives the second part plenty of bite, even if his role in the light-hearted close strikes a false note. James Platt brings some Russian-style substance to Count Rostov, and there are well-drawn vignettes from Jonathan May as Prince Bolkonsky (Andrei’s outspoken father) and from David Stout as Dolokhov and Napoleon.