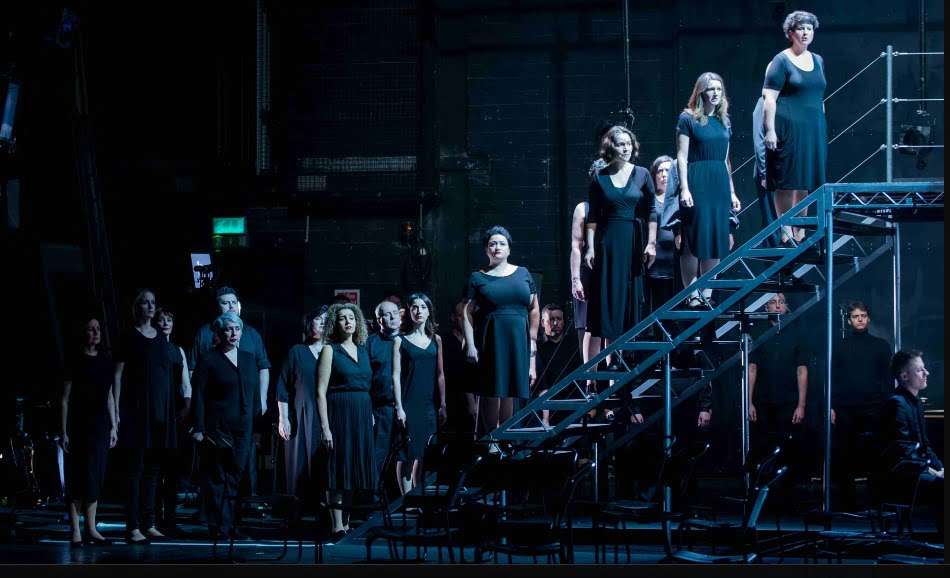 It is surely a brave composer who takes on the same subject as that treated by Wagner in a work which happened to do nothing less than change the course of Western music. Perhaps for this reason Frank Martin’s Le Vin herbé (1938-1941) skirts around that challenge by using a different source for his drama than the mediaeval narratives used in Wagner’s Tristan und Isolde, and by casting it as, technically, an oratorio rather than an opera, albeit one which has inspired a fully-staged realisation on the infrequent occasions that it has been performed. It is surely also apposite that, in composing the work during the Second World War, Martin (a Swiss) sought to engage with, and reclaim from Nazi appropriation, one of the monuments of Germanic art by turning to an alternative French source for his version.

In this re-telling, the outcome of King Mark’s discovery of the adulterous union between Tristan and Iseult (the Fair, here) is complicated by the fact of Tristan’s then marrying Iseult of the White Hands, followed by his being mortally wounded in battle and calling on his deathbed for Iseult the Fair once again, who returns to him. These alternative manifestations of Iseult could be read as an allegory for the different notions of Germany or France being fought for and against each other, whilst Martin worked on the composition, and offer an enduring symbol for the dynamic between desire, reality and imagination, or between apprehension and rapprochement that obtains in any sort of relationship, at any level, whether political, social, or emotional. 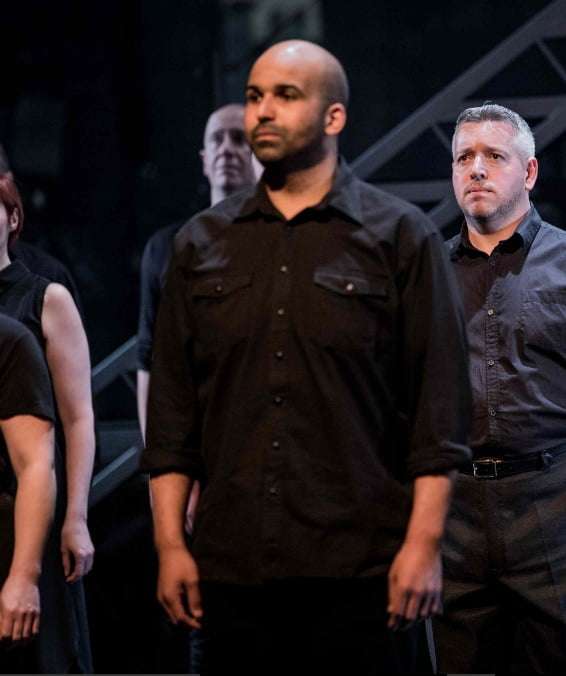 Polly Graham’s production remains resolutely abstract, however, with the cast mainly in impersonal black costumes manoeuvring over a simple set of a raised platform with stairs on either side, and in front of which the small ensemble is positioned, amidst the action, though rarely obstructing it. That is set within the deep purples, blues, and blacks of Tim Mitchell’s lighting which emphasises the interiority of the drama, rather than any outward projection into the world at large. White and black dress usefully distinguishes Iseult the Fair and of the White Hands respectively but otherwise, for the most part, the choreographic action is suitably low-key.

With its austere, pared down textures, Martin’s score is a direct, syllabic setting of the words, with an accompaniment for a chamber ensemble of piano and strings that is evocative and atmospheric. It is rather the opposite of the highly wrought, dramatic sweep of late-Romantic opera and is more redolent of Carl Orff’s stage-works such as Der Mond or Die Kluge, or Britten’s Church Parables.

Sure enough Tom Randle and Caitlin Hulcup generally avoided a feverish account as Tristan and Iseult, Hulcup perhaps even surprisingly demure. Randle rose up to a fair degree of passion and emotion as he reflected upon his treacherous passion for her in conflict with his obligations to Mark in his extended monologue in Act Two, even lyrically so, although that is not a quality otherwise prevalent. Sometimes a nasal character in his singing worked against that, but his tone was not otherwise compromised.

Both Catherine Wyn-Rogers and Rosie Hay brought anxiety and tension through more strenuous vibrato and declamation so as to lay stress upon their concern for the fate of Tristan and Iseult, as the latter’s mother and confidante respectively. Together with the crisp, but also plangent, delivery by the WNO Chorus – a choir provides much of the narrative impetus – they offset the private rapture of Tristan and Iseult with a surrounding aura of urgency and incident as the lovers’ entanglement plays out in a somewhat more visible and public environment than it does in Wagner’s music-drama. Even so, in having the chorus disperse outwards over the stage and into the auditorium during Tristan’s death-scene in Act Three, that still did not open out the drama into a wider arena, so much as to draw the audience into its rarefied world.

Except for Mark – in which Howard Kirk gave a finely nuanced account encompassing both his desire for revenge and compassion – the other parts are little more than ciphers, but vocal variety and distinction were achieved by Stephen Wells, Gareth Dafydd Morris, and Sian Meinir in their brief appearances, which told all the more in contrast to the dramatically anonymous contributions of the narrators and storytellers.

James Southall directed the ensemble with an astute and sensitive grasp of the score, complementing the singers with an accompaniment that was often discreet or simply establishing the sonic mood of a scene through held chords or rhythmic motifs rather than development. But that sustained its own logic, crystallising into a fine performance of a rare work that instilled it with dramatic force whilst also preserving its solemn, ritualistic character in enacting a well-known mediaeval legend. It is difficult not to draw comparisons and associations with Wagner’s treatment, but knowledge of that is not necessary, and Martin’s setting offers much which is stimulating on its own terms and should be experienced as such.