Prokofiev
War and Peace, Op.91 – Opera to a libretto by the composer and Mira Mendelson based on Leo Tolstoy’s novel [performing version by Katya Ermolaeva & Rita McAllister with a translation by the latter [sung in English, with English and Welsh surtitles]

Like Lulu and Porgy and Bess, Prokofiev’s War and Peace is a magnum opus stymied by the lack of a definitive performing version. In time such problems tend to resolve themselves. For now the solutions are various and hotly disputed by partisans. 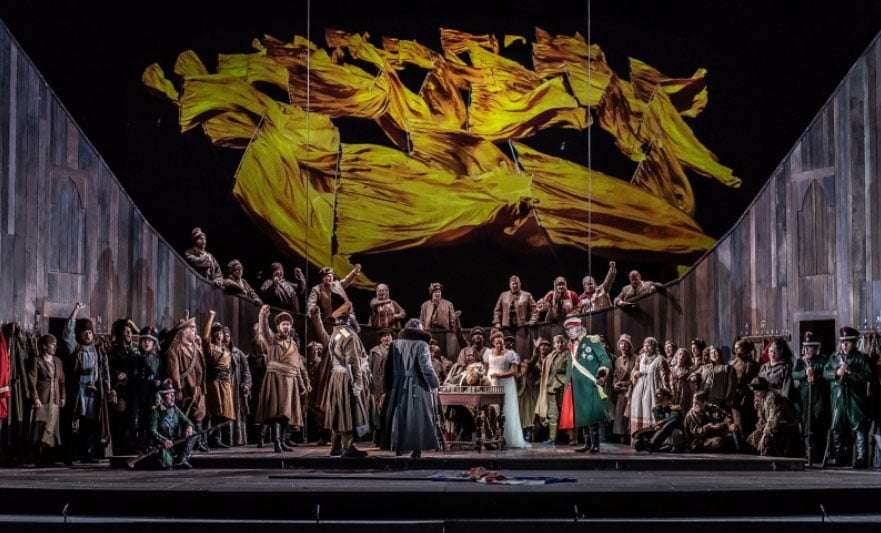 Despite the triumph of Francesca Zambello’s Paris Opéra production of 2000 (the glorious designs were by Welsh resident John Macfarlane, and conducted by Gary Bertini), the opera’s reputation is that of a problem piece. ENO justified its shift to the Coliseum with it – Colin Graham’s 1972 staging really filled the space – but the 2001 production by Tim Albery made rather less impact and Covent Garden has shown no enthusiasm for mounting its own.

Given that Prokofiev wrote more music than can be comfortably accommodated in a single evening (some of it composed under duress), compromises must be made. One solution is to prune back the bellicose choruses and socialist realist vignettes. WNO has taken a different route, apparently returning to Prokofiev’s first thoughts, “lyric-dramatic scenes” focused on the tribulations of Russian high society rather than the heroic resistance of the common people, but then shoehorning in truncated bits of subsequent editions where indispensable.

We get disappointingly foreshortened impressions of the opening love and ballroom scenes, the latter dating from the post-War period. Most of the rest seems indebted to the discarded initial incarnation of the score revived by musicologist Rita McAllister for a 2010 collaboration between Scottish Opera and the Royal Scottish Academy of Music and Drama (in partnership with the Conservatoire of Rostov-on-Don). There is a definite attempt to keep Pierre at the centre of a narrative arc so it helps that he is incarnated in the night’s most outstanding performance by Mark LeBrocq. Less happily, Prokofiev’s music for him is not always especially inspired and the character’s emotionally satisfying reconciliation with Natasha qv the Zambello production on DVD is strictly apocryphal.

David Pountney, who includes too much of the dodgy patriotic element one might have expected him to cut regardless of composition date, skimps on more sympathetic later interpolations. His parting shot is a comic military scene. If Prokofiev intended this in 1942 it’s not surprising he thought better of it. The traditional choral recap of Kutuzov’s aria is offered as an encore. 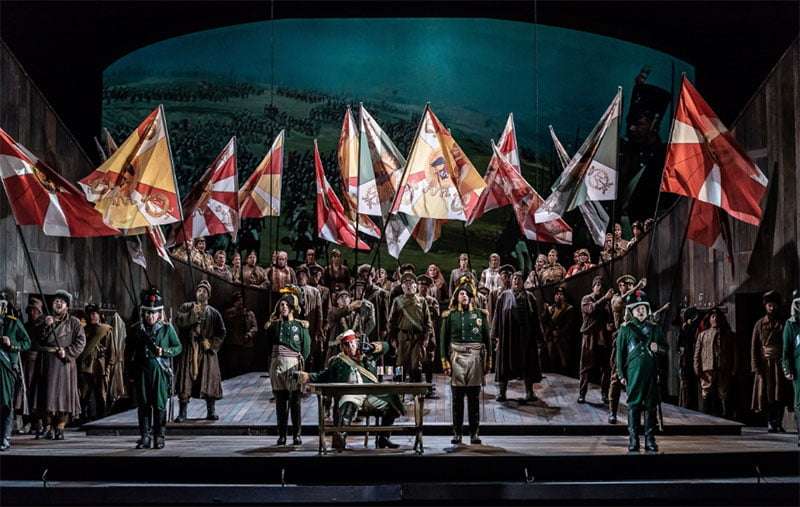 There are highlights – the Chorus is on predictably fine form in music of vastly variable quality and the Orchestra finds its best standard following a rather brusque inexpressive response to the earlier scenes – but the overall impression is of a botched job whether on the part of composer, editor or director.

Advances in video technology and a co-production deal with Theater Magdeburg enable WNO to side-step some of the outlay associated with massed choirs, costumes and weaponry, the set being an effectively re-imagined version of that used for the Welsh company’s 2016 production of Iain Bell’s In Parenthesis. At ground level is a vaguely Globe-like wooden amphitheatre with no more than a shallow tier above. Period costumes are hung round at the periphery. Tolstoy is shown writing at his desk. The heavy lifting is done by video work, projected higher up. While some of it is distinctly impenetrable, the best bits are borrowed from the 1966 War and Peace film by Serge Bondarchuk. It seems a bit cheeky to condemn the overtly propagandist aesthetic of the opera’s later incarnations while relying on a quintessentially Soviet epic to make it work at all.

Whatever the constraints, Pountney and his team give us a grand four-hour show sung in English. The text is functional rather than poetic, inevitably lacking the colour and impact of the original Russian. There are no big stars but then the opera relies more on strong ensemble playing and almost all the singers take multiple parts. Jonathan McGovern as Andrei Bolkonsky is ardent if a little bleaty, Lauren Michelle’s Natasha effective rather than affecting and rarely shrill. Typically their death scene is textually curtailed and glimpsed through a window rather than taking centre-stage in some expensively recreated field hospital.

James Platt is vocally resonant as Count Rostov as is David Stout’s Napoleon, both taking on other parts. Napoleon’s retinue includes some curiously attired commedia dell’arte hangers-on. It is not Simon Bailey’s fault that his Field Marshal Kutuzov sometimes seems like a figure of fun rather than a national hero, the intention being presumably to undercut any hint of Stalinist pretension. As in Graham Vick’s more recent, post-modern production at the Mariinsky, he exists only within inverted commas. The choral numbers scarcely avoid portentousness but the singing is so good that perhaps the director felt constrained to leave them in.