Skip to content
LnRiLWNvbnRhaW5lcltkYXRhLXRvb2xzZXQtYmxvY2tzLWNvbnRhaW5lcj0iNmIzNDMzNmNmZTc3NWZiNGJlMTVjMmIwMzU3NWM1MjYiXSB7IHBhZGRpbmc6IDI1cHg7Ym94LXNoYWRvdzogNXB4IDVweCAxMHB4IDAgcmdiYSggMCwgMCwgMCwgMC41ICk7Ym9yZGVyOiAycHggZG90dGVkIHJnYmEoIDEwOSwgMTA4LCAxMDgsIDEgKTsgfSAudGItZmllbGRbZGF0YS10b29sc2V0LWJsb2Nrcy1maWVsZD0iODM3Y2ExZjc0MGRjZDdkOTdlMzQzOWMyYjIwMWZmZTMiXSB7IGJhY2tncm91bmQtY29sb3I6IHJnYmEoIDIzOCwgMjM4LCAyMzgsIDEgKTtwYWRkaW5nLXRvcDogMTBweDtwYWRkaW5nLWJvdHRvbTogMTBweDtwYWRkaW5nLWxlZnQ6IDEwcHg7IH0g
LnRiLWNvbnRhaW5lcltkYXRhLXRvb2xzZXQtYmxvY2tzLWNvbnRhaW5lcj0iNmIzNDMzNmNmZTc3NWZiNGJlMTVjMmIwMzU3NWM1MjYiXSB7IHBhZGRpbmc6IDI1cHg7Ym94LXNoYWRvdzogNXB4IDVweCAxMHB4IDAgcmdiYSggMCwgMCwgMCwgMC41ICk7Ym9yZGVyOiAycHggZG90dGVkIHJnYmEoIDEwOSwgMTA4LCAxMDgsIDEgKTsgfSAudGItZmllbGRbZGF0YS10b29sc2V0LWJsb2Nrcy1maWVsZD0iODM3Y2ExZjc0MGRjZDdkOTdlMzQzOWMyYjIwMWZmZTMiXSB7IGJhY2tncm91bmQtY29sb3I6IHJnYmEoIDIzOCwgMjM4LCAyMzgsIDEgKTtwYWRkaW5nLXRvcDogMTBweDtwYWRkaW5nLWJvdHRvbTogMTBweDtwYWRkaW5nLWxlZnQ6IDEwcHg7IH0g
Verdi
Macbeth – Opera in four Acts to a libretto by Francesco Maria Piave after Shakespeare [1865 version with interpolations from the 1847 score; sung in Italian, with English surtitles]
LnRiLWNvbnRhaW5lcltkYXRhLXRvb2xzZXQtYmxvY2tzLWNvbnRhaW5lcj0iNmIzNDMzNmNmZTc3NWZiNGJlMTVjMmIwMzU3NWM1MjYiXSB7IHBhZGRpbmc6IDI1cHg7Ym94LXNoYWRvdzogNXB4IDVweCAxMHB4IDAgcmdiYSggMCwgMCwgMCwgMC41ICk7Ym9yZGVyOiAycHggZG90dGVkIHJnYmEoIDEwOSwgMTA4LCAxMDgsIDEgKTsgfSAudGItZmllbGRbZGF0YS10b29sc2V0LWJsb2Nrcy1maWVsZD0iODM3Y2ExZjc0MGRjZDdkOTdlMzQzOWMyYjIwMWZmZTMiXSB7IGJhY2tncm91bmQtY29sb3I6IHJnYmEoIDIzOCwgMjM4LCAyMzgsIDEgKTtwYWRkaW5nLXRvcDogMTBweDtwYWRkaW5nLWJvdHRvbTogMTBweDtwYWRkaW5nLWxlZnQ6IDEwcHg7IH0g 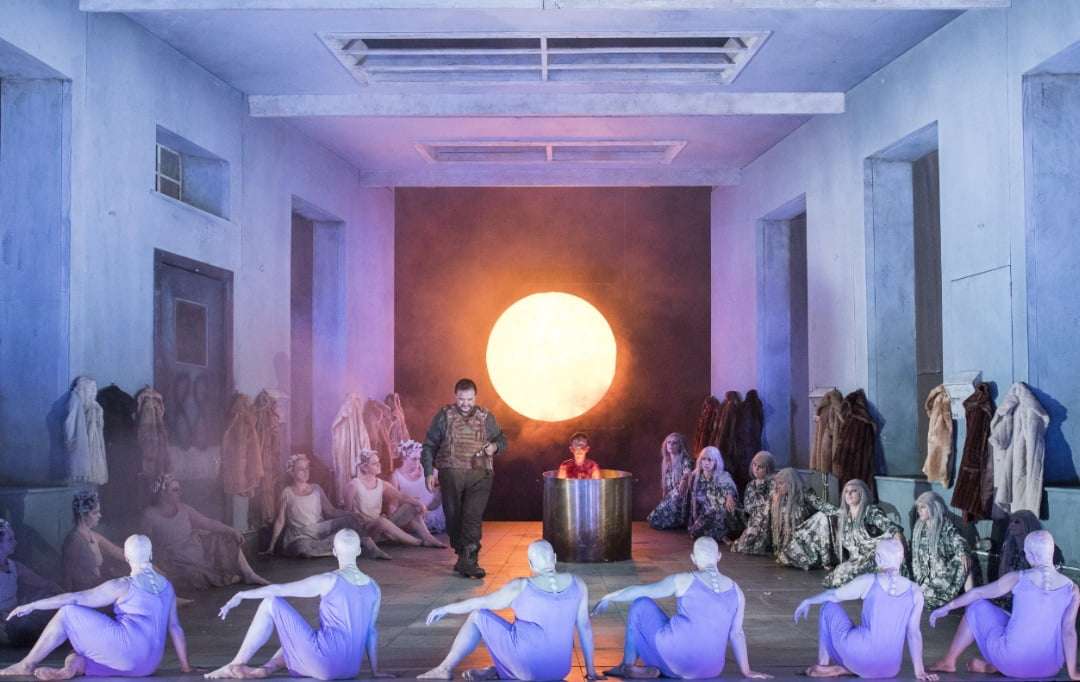 Welsh National Opera’s outing of Verdi’s Macbeth is triply well-timed in this co-production with Northern Ireland Opera (where it was first seen in 2014). It is part of a season which marks the 400th-anniversary of Shakespeare’s death (people seem not to have tired of that yet); the theme of Scottish nationalism running through the production makes for a rather suggestive comment as a second Referendum on Independence looms; and with the approach of Hallowe’en, audiences might be more receptive to the work’s supernaturalism.

That said, this last element is toned down and treated more as parody. The witches divide into three groups – one overweight and bald, seemingly clad in nightdresses, a second in dowdy green-patterned attire, the third in shabby white garb and laurels, like a warped band of Vestal virgins. They represent a sardonic perversion of female sexuality as they dance around, and coax Macbeth during his visitation to them in Act Three, somewhat like Klingsor’s Flower Maidens in Parsifal, rather than anything otherworldly or weird, though the choreography is menacing and lurid enough. Duncan and Banquo both appear after they are murdered, but more or less as flesh-and-blood figures instead of insubstantial spectres. Macbeth’s assassins do not look like murderous fiends so much as an unruly band of contemporary football supporters, informally dressed with woollen hats. 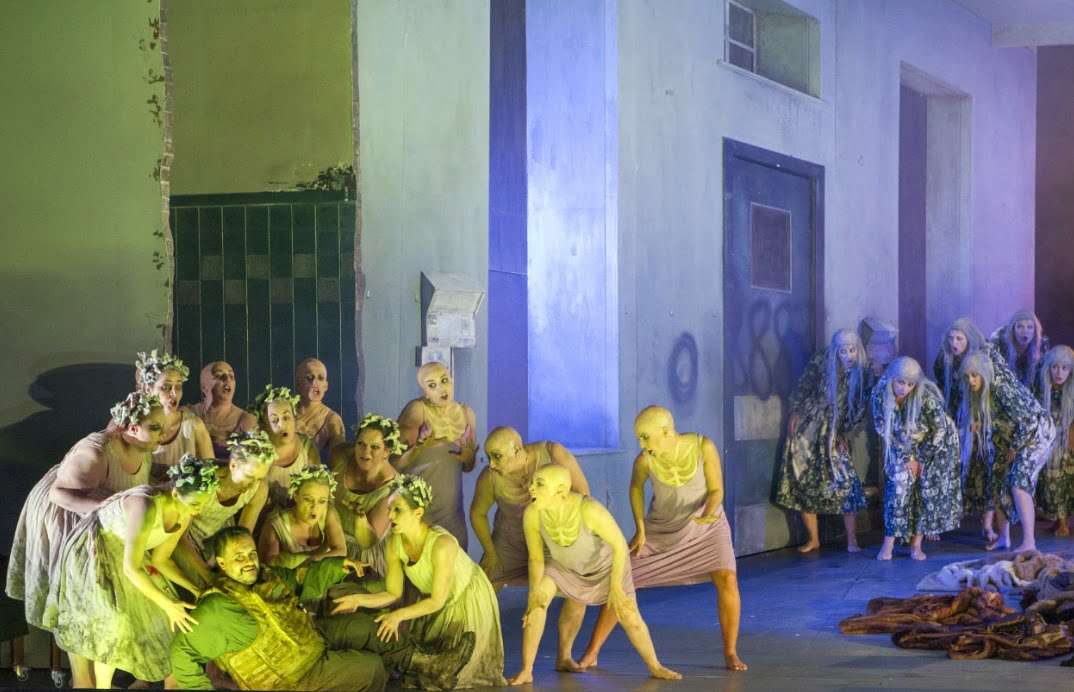 The performance from the pit, under Andriy Yurkevych, largely mimicked this approach with a generally fast-paced account, not particularly stopping to take stock or draw out such dramatic moments as the apparitions. But that otherwise suited the score which is concise, tending to avoid extended arias, and the orchestra executed the range of timbres which Verdi employs with sympathy.

Miriam Murphy’s Lady Macbeth stood out as the driving force behind the grisly machinations which plunge Scotland into tyranny, with a powerful rendition. Sometimes her tone was steely, but that was in keeping with the character which can hardly be thought to require a lyrical soprano. It was telling that, after the murder of Duncan, the royal-blue colour of his jacket passed to her, not to Macbeth, revealing her to be the real centre of power – and ironically evoking the figure of the Virgin Mary in so much Christian iconography where she is often depicted in the same colour. Like Imelda Marcos, she also possesses a large array of shoes.

Luis Cansino portrayed Macbeth as, at first, uncertain of himself and reluctant to take on the kingly role prophesied for him. He exuded a vocal confidence which guided him through the development of the role as Macbeth comes to accept his fate, first to rule and then be defeated, though the banquet scene of Act Two might have been more frenzied. 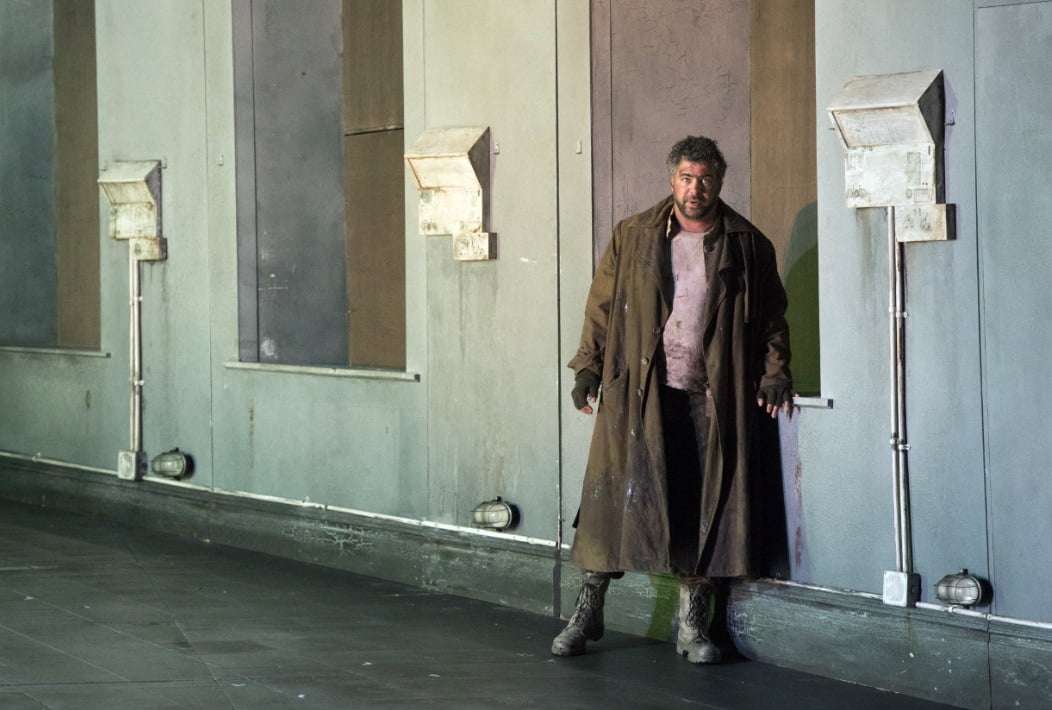 Miklós Sebestyén gave a nobly lyrical account of Banquo, unflustered and dignified up to the point of his murder, and paralleled by a similar composure and focus on the part of Bruce Sledge and Simon Crosby Buttle as respectively Macduff and Malcolm. The Doctor of Martin Lloyd and the Lady-in-waiting of Fiona Harrison-Wolfe were efficient if more anonymous. Contributions by the young Tomi Llewelyn were effective, particularly as an apparition to Macbeth.

Whatever the dramatic felicity or not of their appearance, the Chorus was, at least, musically well disciplined, coming together for a subdued but emotional ‘Patria oppressa’, during which a video projection showed scenes of war-torn dereliction, possibly from the Balkans of the 1990s. That jarred a little with the comparative levity with which the examination of rising nationalism had been treated earlier on, but nevertheless a potent comment is made about the divisiveness which such exclusive political movements can foster.