Wagner
Lohengrin – Romantic opera in three Acts to a libretto by the composer [sung in German, with English and Welsh surtitles] 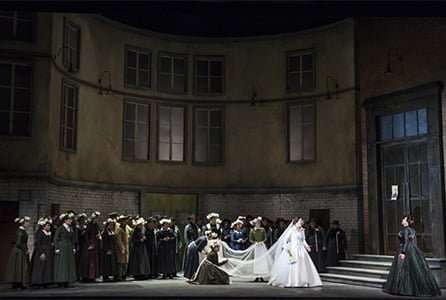 The magic element of Lohengrin requires quite a suspension of disbelief, which is more easily folded into a nebulous, dark-ages staging. For this new production for Welsh National Opera of Wagner’s extreme, romantische opera, Antony McDonald has been fairly precise about period – the second-half of the nineteenth-century, contemporary with the composer – and has accordingly adjusted its emotional and psychological world. Brabant is an inward-looking community, imprisoned by piety – there is much defiant waving of little black prayer-books by the chorus – and by the scruffy, comfortless military barracks where most of the action takes place. There is much to fear, represented by the drop-front gauze of a beautiful (and during the Prelude to Act One, beautifully lit) but neutral landscape, the terrifying but transforming ‘beyond’ from which Lohengrin is to emerge.

McDonald’s direction and, more particularly, his designs suggest rather than assert. Vaguely Bavarian costumes remind us of King Ludwig II’s obsession with the opera; dreams and desires are still neurasthenic rather than a matter for analysis; Elsa is an icon of Victorian passion and repression, even, in her denouement with Lohengrin, falling into an attitude like a melodramatic painting of the period; the barefoot, hippy-like Lohengrin from the south promises a liberation and spirituality that would later seduce and annihilate Aschenbach in Death in Venice; when King Henry sings of a German sword for a German land, McDonald’s direction makes this anticipation of Teutonic sensibility and historical baggage plausible, as he does the Aryan vision of Germany’s future realised in the threatening figure of the resurrected Gottfried – and the swan, reminiscent of the one in the early-1990s’ Lohengrin at ENO, is enticingly sexually ambiguous; Lohengrin’s reluctance to give his name is because definition is limiting, and, once the issue has been forced, he has no option but to withdraw with a Zen-like shrug that his time has not yet come. 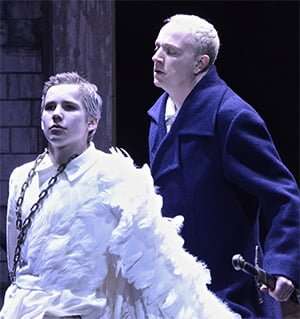 McDonald has met Lohengrin’s specific Germanic qualities head-on, but has done so with an impressively light touch and informed imagination, so that the need for a shining knight and lieber Schwan is perfectly believable. He even managed to raise a laugh in Elsa and Lohengrin’s wedding-night scene. 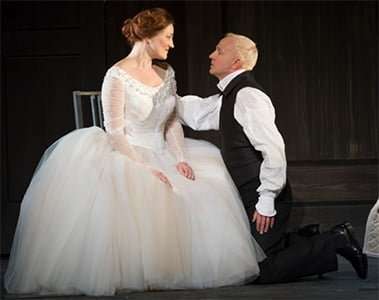 Musically, it’s just as strong, sometimes overwhelmingly so – Lohengrin-lovers, whatever they make of the production, will not be disappointed. Emma Bell and Peter Wedd were enthralling as Elsa and Lohengrin. Occasionally I missed that Elsa-specific passive weightlessness in Bell’s rich soprano, but succumbed completely to her lyrical, supremely lyrical singing. Her acting, too, was notably astute – her compulsion to dig the truth out of Lohengrin and her self-loathing at having done so were brilliantly done. Wedd’s powerful Lohengrin matched nobility with inwardness, and his singing combined lieder-like immediacy with a consistent heroic tone. He looked the part, too, and projected Lohengrin’s need for unconditional love with, given the vast size of the theatre, great intimacy. His perfectly placed ‘Heil dir’ when he eventually gets Elsa to the altar really hit the spot.

Susan Bickley menaced superbly as Ortrud in Act One, then erupted spectacularly the second, her gleaming soprano brooking no opposition. If she was a formidable Lady Macbeth figure with Friedrich, she was an unforgettable feeder of doubt in Elsa’s bosom. She never disappoints. As Friedrich, Claudio Otelli (a late replacement for the indisposed John Lundgren) gave a rather generic, grandstanding performance, but his dark-side singing complemented Bickley’s furious, bleak toxicity. Matthew Best, it was announced, was suffering from a throat infection; his bass was admittedly less cavernous and broad than usual, but he made the political point of an enfeebled monarch convincingly.

The WNO Chorus and Orchestra were on top form, the former producing a huge sound for Elsa’s progress to her wedding, and the Act Three interlude, with bands of trumpets placed round the theatre, was breathtaking. Under Lothar Koenigs’s fluid, intuitive conducting, Wagner’s lovely score worked its peculiar, potent magic.