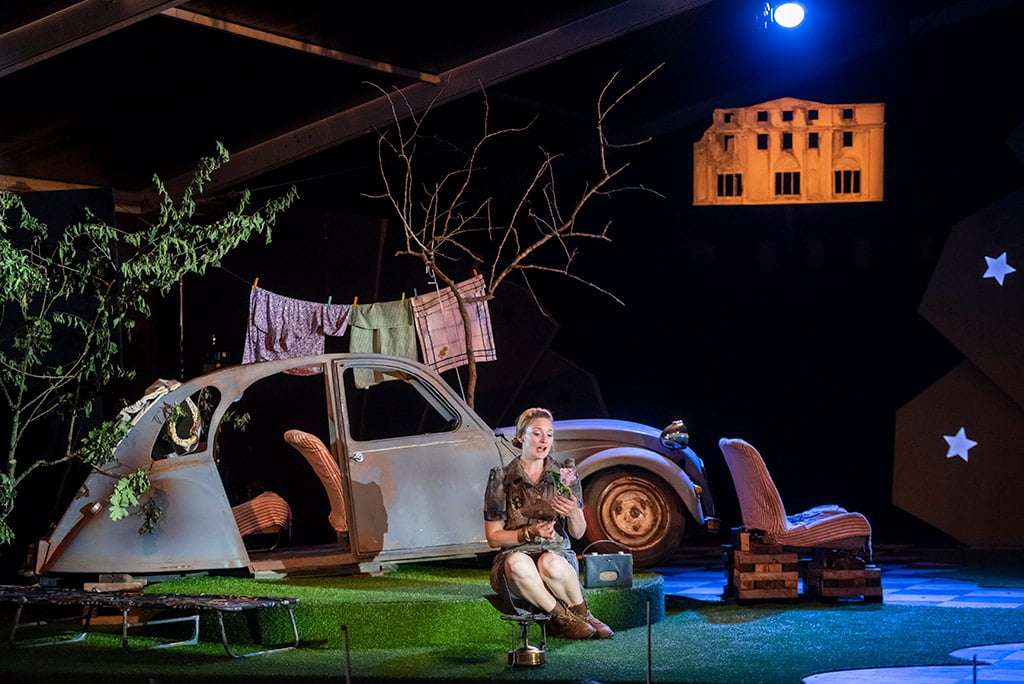 Rather than focus so much on the physical, personal transformation of Cinderella (Angelina) from the scruffy servant girl (as she is treated) in Don Magnifico’s household, to princess, via her mysterious appearance, incognito, at the ball, it is the contrast effected by her rags to riches story which remains the abiding idea of Victoria Newlyn’s production of Rossini’s opera.

The set principally comprises a dilapidated old Renault at one side of the stage, in which Don Magnifico is found sleeping, whilst on the other is a Land Rover, around which Ramiro and Dandini tend to linger (including having a picnic of their own, shortly before the interval in which the audience may indulge theirs).

Although neither vehicle moves, the connection is implicitly drawn between the Land Rover as Ramiro’s carriage (and therefore the largesse he bestows on Cinderella) and the Renault as representing the reduced, peripatetic circumstances of Magnifico’s household. Indeed, the facades of two country houses hovering high up at the back of the stage – one looking grubby, the other pristine – draws another parallel between aspiration and present, compromised reality.

The ball is only suggested, rather than played out, and in any case, owing to reasons of space and resources, the choral sections of the opera are cut (except for a brief interjection in the Act One Finale, projected, presumably pre-recorded). But the production neatly elides that omission and draws attention more to the personal relations among the characters as a result. As it stands, enough amusement is provided by the choreography with dances inspired by Hollywood musicals and neat movements in line with the music’s tempo for the ensemble near the end of Act Two in which the situation is compared with a tangled knot that only gets worse the more it is seemingly unravelled. Nicholas Mogg particularly hams up the comic part of Dandini (the valet disguised as his master, Ramiro) at the same time as executing his music with commensurate nimble spirit. 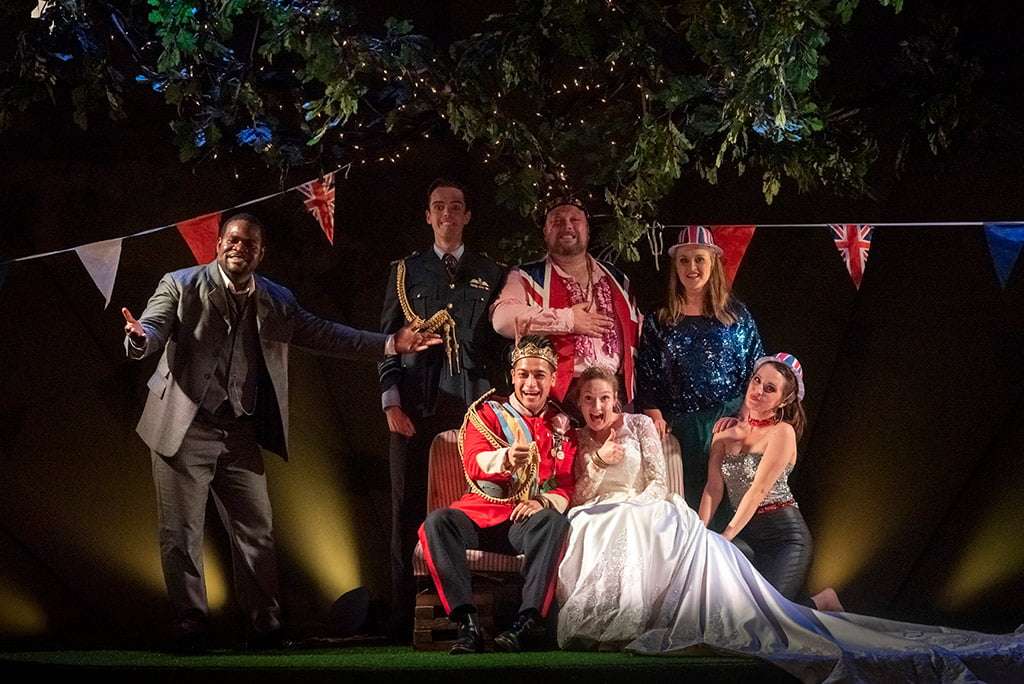 Heather Lowe and Filipe Manu make a musically distinguished couple as Cinderella and Ramiro respectively: Lowe achieves a sense of vulnerability alongside an impressive grandeur later on, if a touch brittle, in her moment of triumph, whilst Manu sings suavely as the prince, notwithstanding an occasional break in his melodies, and not getting around the quick volley of words quite as efficiently as Mogg in the duet ‘Zitto, zitto, piano, piano’. Matthew Stiff plays Magnifico with affectionate comedy, rather than pushing the role to the point of caricature, leaving Zoe Drummond and Sioned Gwen Davies to draw more opprobrium to the characters of his two daughters, Clorinda and Tisbe, for their ladette behaviour and social-climbing, with their well-projected singing. Blaise Malaba sings powerfully, if somewhat dryly, as Ramiro’s tutor, Alidoro.

Matthew Kofi Waldren conducts a sensitively paced account of the score, not driving the rhythms too hard, and timing the comedy well. In the reduced orchestration by Jonathan Lyness, the strings inevitably sound exposed at times, but on other occasions that lends the performance some clarity and leanness, just as the harpsichord does for the recitatives, rather than fortepiano.

Overall, this is not a lavish Cinderella, but in bringing other aspects of the work to the fore, this production succeeds winningly in its wit and charm, well-formed and -proportioned.