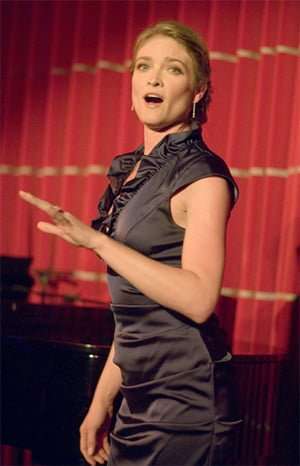 The American Shana Farr has a truly splendid voice that does full justice to the repertoire in tribute to the beloved Julie Andrews. From the moment she launches into the title number of The Sound of Music, of all Andrews’s trademark numbers it’s the one she is most associated with, it’s clear that Farr need not fear any comparisons. Her opening medley includes Camelot (including the lesser-known ‘Before I gaze at you again’), Mary Poppins, and My Fair Lady. Also included is ‘Once upon a long ago’, written by Arthur Schwartz and Maxwell Anderson for a television musical, High Tor, which paired Andrews with Bing Crosby.

Farr’s voice has more body than Andrews’s, and the two do not sound alike, but they are equally pleasing, with an effortlessly wide range, individual timbre and intelligent phrasing. Farr can be torchy (‘Someone to watch over me’), or buoyant (‘I have confidence in me’), and ranges from operetta (‘I’ll follow my secret heart’) to the bouncy flavour of the Twenties with Sandy Wilson’s marvellous title tune from Andrews’s first Broadway hit, The Boy Friend. Andrews’s initial stardom was in the UK, when aged 12 she appeared in a West End revue and startled with a spellbinding rendition of ‘Je suis Titania’ from Ambroise Thomas’s opéra comique Mignon (1866), which prompted the comment, “a prodigy in pigtails”. Farr strolls through the audience as she warbles this aria, gliding with ease through its complexities.

Overall, Farr sings some twenty songs, among them ‘Feed the birds’ and ‘Ten minutes ago’, one of Richard Rodgers’s lilting waltzes, written with Oscar Hammerstein for the 1957 television musical, Cinderella, from which ‘In my own little corner’ is a highlight as is the haunting ballad that gives Farr’s show its title, from Henry Mancini and Johnny Mercer’s score for the film Darling Lili.

Andrews’s real breakthrough role was that of Eliza Doolittle in the stage version of My Fair Lady, a role she came close to losing when initial rehearsals found her nervous and unable to get convincingly into character – Rex Harrison said she should be replaced. Farr recounts the drama of director Moss Hart’s concentrated determination to unearth the ability he knew was present; Farr likens it to Professor Higgins’s similar determination to make a lady of Eliza. This cues Farr’s talented pianist, Nathan Martin, to recite the speech with which Higgins placates Eliza as he tells her of the “majesty and grandeur of the English language. That’s what you’ve set yourself to conquer, Eliza. And conquer it you will.” Eliza at last masters the pronunciation of ‘The rain in Spain’ and then comes ‘I could have danced all night’, Martin providing the servants’ patter that is performed as counter-melody, Farr ending on a sustained high note. The sequence is captivating and beautifully put together – the highlight of a very civilised evening.