With the imminent retirement of Ioan Holender as Generalintendant of the Vienna State Opera comes the inevitable change of regular singers that have defined the current administration. In an era when the Staatsoper (along with many other major opera houses) elects to replace older productions with ones more modern – and intellectually demanding interpretations – it was refreshing to see a “Salome” that Richard Strauss and Oscar Wilde would no doubt immediately identify as being a representation of their work. Boleslaw Barlog’s sumptuous 1991 production with sets and costumes by Jűrgen Rose reflects the Jugendstil/Secessionist influences that characterise the era of the work’s premiere, with a dominance of swirling Klimtian motifs in both sets and costumes. 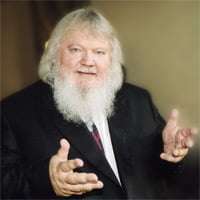 The Orchestra of Wiener Staatsoper (also known as the Vienna Philharmonic, but membership of the latter is more exclusive) was on excellent form. Strauss’s exotic score, whilst laden with full blooded crescendos, also contains moments of purity and subtlety, which Leif Segerstam expressed without sacrificing the quest for dramatic intensity. Fortissimos were terrifying, and Jochanaan’s prophetic passages were moments of hypnotic beauty. The more lyrical passages, whilst competently handled were not delivered with quite the degree of finesse and delicacy.

As Jochanaan Juha Uusitalo made an extremely fine impression with a warm and commanding voice, most evident when the prophet sings of the redemption that Christ would bring to a penitent Salome. As an actor Uusitalo also made a deep effect, delivering a particularly fine confrontation scene with the Judean princess. 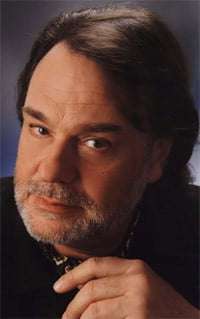 The role of Herodes, which is so frequently cast to a character-tenor, was luxuriously filled by Heldentenor Thomas Moser. His is a voice which still displays a golden tone and shows little sign of the wear that can so often blight singers who have based their careers on such roles as Tristan or Parsifal. So frequently portrayed as a weak and cowardly figure who is ruled by his viperous wife, Moser’s Herodes was a strong man of unquestionable faith whose fatal flaw is a lustful fascination with his stepdaughter. In his delivery of the final phrase in the opera “Man tȍte dieses Weib!” (Destroy this Woman!), Moser commanded the stage, alleviating any doubts as to the authority and strength of the Tetrarch. 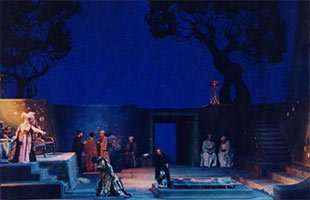 Matching the performance of her stage-husband with a truly memorable account, house-singer Daniela Denschlag cut a formidable figure as the shrewish Herodias. A consummate actress, Denschlag hovered over proceedings like an omniscient vulture awaiting the final heart-beat of her prey before descending to pick at the carcass of her trophy, every vengeful screech casting a terrifying pall.

Best known for her performances in Janáček operas or the more lyrical Straussian roles such as Arabella and the Marschallin, Nancy Gustafson might not come immediately to mind in the lead role. Her Salome was closer to the delicately shaded vocal performance of Maria Ewing than the steel-lunged but equally compelling interpretations of Gwyneth Jones or Catherine Malfitano. Gustafson is now an artiste at the very pinnacle of her vocal powers. Pearly smooth head-notes were floated seemingly effortlessly from and breathy chest-notes enveloped the audience. Acting-wise, too, this was a highly accomplished performance. Although few performers are able to match the dramatic intensity of Ewing in the role, Gustafson’s Salome was deeply credible – a petulant, spoiled and vengeful princess who declines towards the black heart of insanity and psychosis.