Schubert’s settings of twenty-four Wilhelm Müller poems, Winterreise, have undergone many genre-reassignments, the reward for being a work that can support many an nihilistic crisis – the cycle has been recomposed, filmed, danced to, absorbed into theatre, and there is this arrangement, for tenor, wind quintet and accordion by Normand Forget. It is now fifteen years old and has been recorded (in 2008 on the Atma label) by the same artists as in this Wigmore Hall concert. 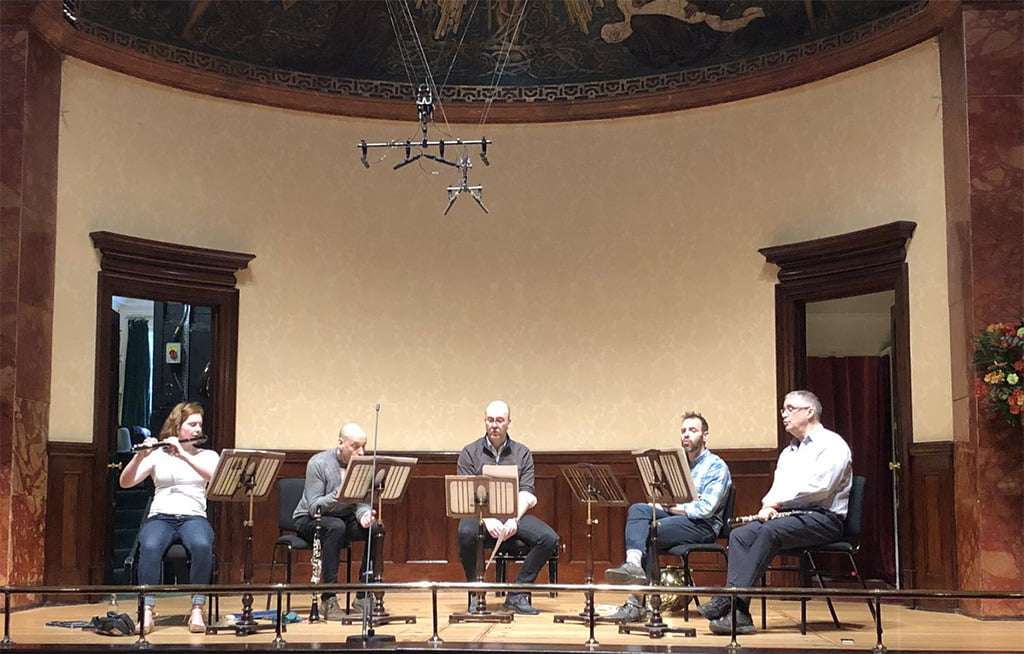 Forget’s wind-writing takes Schubert from blithe, outdoor serenade to full-on late-romantic melancholia (Mahler’s Das Lied von der Erde came frequently to mind) and onwards to Weill-style smoky cabaret. The wind-band sound is very Germanic, and it is both underpinned and undermined by Forget’s inspired use of accordion, played by Joseph Petrič with an extraordinary grasp of its ability to sound like ‘breath from another planet’ (to misquote Schoenberg’s setting of Stefan George in his Second String Quartet). The accordion also threw a new slant on the progress of the whole cycle, rather like the current vogue in opera direction for making a very small role (for instance, the doctor in La traviata) central to the action, in that the accordion became the hurdy-gurdy man (from the final song ‘Der Leiermann’) who in turn becomes the éminence grise of the cycle rather than its destination, inexorably folding the poor disintegrating wanderer into himself.

There is a defining moment that indicates the process is complete – in Forget’s arrangement of ‘Das Wirtshaus’ (that is, a cemetery that is the inn for the dead) for accordion and a quiet humming chorus for the four men of Pentaèdre – eerie and incidentally prescient of a style of soundtrack composed for bleak Scandi-noir thrillers – and the accordion’s presence dominates the closing songs.

There were times when the arrangement fixed rather than hinted, made explicit what is better off implicit and, like Forget’s stream-of-consciousness, rather precious programme note, told us what to feel. Yet set against that were just as many moments in the group’s superbly refined and animated playing – the exquisitely judged turn to the major in ‘Gute Nacht’, a ravishingly scored rethink of ‘Der Lindenbaum’, Louis-Philippe Marsolais’s brief flirtation with optimism in his horn-playing in ‘Die Post’, the abstracted decays in the codas of the more introverted songs – that completely persuaded you to take Forget’s arrangement on its own terms.

Also, while there was an almost Tom and Jerry cartoonish brightness to ‘Letzte Hoffnung’, colours could quickly drain and textures flat-line to desolate effect, and there was no lack of bite, irony and that very modern aimlessness of distracted mood-hopping – the songs were performed according to Müller’s order, so ‘Die Post’ came early, and ‘Frühlingstraum’ placed before ‘Einsamkeit’, near the end, compounding the impression of the will to live being sucked out of the unravelling lover.

Christoph Prégardien has form in Winterreise, both with Schubert’s piano and this version, and he was in marvellous voice. The baritone end of his tenor was exceptionally vulnerable and tender, the words came across with idiomatic fluency, and he phrases line and adjusts colour with great tact. He also acted it, in vestigial but immensely expressive gestures, so that a raised hand or a step forward took on intense significance, and he proved a master in the refinements of mood and awareness. You were never quite certain who was leading – Prégardien? Forget? Petrič? – but the ensemble was natural and responsive. The test for any reworking of an original as holy as this is whether it expands your appreciation, and this version of Winterreise definitely does.