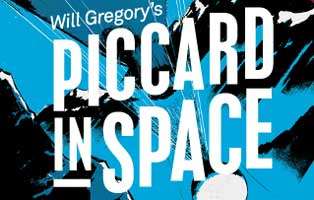 There were whoops and cheers at the end, so I must tread carefully. With “Piccard in Space” (commissioned by the BBC), Will Gregory, half of the electronic-music duo Goldfrapp, has written an opera based on the real-life story of Belgium’s greatest explorer, the Swiss-born Auguste Piccard – the man who inspired the character of Professor Calculus in Hergé’s “Adventures of Tintin”. Gregory’s focus is an epic and near-fatal balloon flight made by Piccard in 1931 to the edge of space, a quest in which he was accompanied, in true boys’-own fashion, by a faithful young assistant, Paul Kipfer. The stuff of opera? Big themes, larger than life characters, faith, despair, catharsis … yes … but it needs a composer who is equal to the task.

Gregory’s command of orchestration is confident, and his integration of a Moog synthesizer ensemble into the BBC Concert Orchestra allows him to create some striking textures. Unfortunately though, a proficient orchestrator is not de facto a composer and the musical material here is desperately thin. Gregory essays some ‘straight’ (for want of a better word) opera writing, but his ideas are neither original nor architecturally ambitious enough to sustain interest beyond the odd melodic line or fugue. “Everything is calculated” intones Andrew Shore’s Piccard repeatedly, and how right he is, especially when the composer solves his flagging inspiration by giving Albert Einstein (Leigh Melrose, not at ease) a song-and-dance routine or by having the game Shore step out of character to lead the audience in community singing. Astonishingly, at this first performance, when the ghost of Sir Isaac Newton (countertenor Nicholas Clapton) butted in crossly to put an end to this nonsense, there were hisses from some quarters. Oh no there weren’t. Oh yes there were. 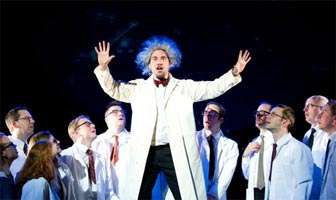 The evening had its pleasures, foremost amongst them (and I never thought I’d say this) the video contributions of Kathy Hinde. Throughout the performance her humorous, inventive images were projected onto a giant semicircle and two planet-like discs placed above the orchestra. Designer Michael Vale supplied a second semicircle downstage, a floor this time, upon which the action was played out by a fine quintet of singers and an outstanding 16-strong choir in lab coats and spectacles. Robin Tritschler and Mary Plazas as Mr and Mrs Kipfer had the least rewarding roles yet were the heroes of the night as they battled the score to create their engagingly rounded characters. Tritschler it was who opened the show with a virtuoso passage of knowing Sprechstimme, during which Gregory’s and librettist Hattie Naylor’s wit was able to shine briefly before dying like a supernova.

For all Charles Hazlewood’s conviction at the helm of the BBC Concert Orchestra, “Piccard in Space” is less an opera than a patchwork of pastiches. For much of the time the score feels like one of those new-music-lite commissions The King’s Singers used to perform in the 1970s: here a bit of Sondheim, there a shot of Michael Nyman, now a nod to “Star Trek” followed by an echo of John Adams. Piccard’s balloon ascent is little more than a smorgasbord of musical borrowings, and at two hours plus interval it’s a long ride in a slow machine.