“Winterreise” is an immense work, one of the greatest masterpieces produced within the European musical tradition. As such, it can accommodate many different interpretations (or should that be “any interpretation”?). Ian Bostridge first performed the work soon after his career-change to become a singer in 1992, has recorded it with Leif Ove Andnses and made an art-film version of it, directed by David Alden and with Julius Drake as accompanist. Here he offered what was presumably a newly studied interpretation, with Mitsuko Uchida.

I referred in my review of Dmitri Hvorostovky’s Russian song recital at this venue on 16 October to the trend of pairing singers with celebrated concert-pianists in the Art-Song repertoire. Bostridge and Uchida were far better matched than Hvorostovsky and Kissin. This was evident from the opening bars of ‘Gute Nacht’, hushed and subdued, with no hint of flamboyance. Ian Bostridge was not upstaged as Hvorostovsky had been. In fact the singer was always the main expressive agent. Not that the clock had been turned back to the days of the accompanist’s subordination. This was a joint interpretation, Uchida’s mouthing of the words indicated the unity of ideas between the two artists as she played and with her eye-line being directed at the singer. It is after all as much an assertion of equal status for the pianist to play softly as to hammer the keys. Uchida offered plenty of power at a moment such as the depiction of the cold winds in ‘Der Lindenbaum’ but her ability to play genuinely softly was one of the most estimable aspects musically of the evening.

With Bostridge’s academic background one expects an intellectually conceived approach to whatever he tackles, rather than an instinctive one; but perhaps this is unfair stereotyping. I found myself trying to deduce the concept. Had this been an opera production the stage director would doubtless have publicised his or her concept in interviews and a lengthy article in the programme. In this case there was a pre-concert talk, which I was unable to attend. Perhaps it included an explanation of the artists’ approach to the work. I would in any case prefer to follow the clues in the performance itself to deduce their intentions.

That proved to be a hard task, as no single word or formulation could characterise the interpretation, nor did any comparison with existing versions come to mind. Thus this review is an attempt to infer what Bostridge meant but may well be wrong. The opening did not immediately proclaim an unconventional reading. The protagonist took us into his confidence and though resentment flared up at “Was soll ich länger weilen”, (inventively announced in advance by the last chord of the pianist’s introduction to the verse), if anything he set off with a touch of optimism, not anticipating what was to come.

Later developments were, however, foreshadowed by the disdain with which he treated his own ingenuousness and the family’s mercenariness in ‘Die Wetterfahne’, a disdain expressed not only vocally but also through some restlessness of movement. Bostridge resorted to a quasi-Sprechgesang for such sarcastic utterances. That is one of several layers in the Bostridge voice these days, the clear light lyric-tenor with a hint of the plaintive with which he was naturally endowed is still there but it can turn caustic too. It seems to have grown in size, except for a rather croaky low register. Repetitions of lines and stanzas, in which this work abound, benefited from differential treatment and the added meaning this implied. The flowering of tone in the traveller’s repeat of “Soll denn kein Angedenken” in ‘Erstarrung’ was an early example. Command of the transitions between registers also permitted him to isolate individual words in the text, so not only did the searing harmonic clashes in ‘Wasserflut’ (such as ‘das heisse Weh’) make the effect that Schubert intended but a few unwritten surprises were also offered.

With ‘Wasserflut’ having established powerfully the subject’s sense of betrayal, a relatively straightforward account of the cycle seemed to be in progress. Intelligent, perceptive treatments of some other songs were not in themselves radical statements. ‘Frühlingstraum’ was a rewarding example: the rhythmic precision of the first two parts of each tripartite section distinguished it musically, while the contrasted lyricism of both performers’ treatment of the third verse implied that there was perhaps still hope for the protagonist. 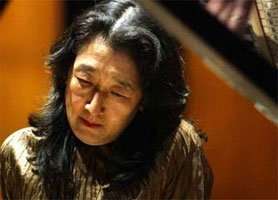 Already, however, we had heard signs of a more idiosyncratic approach. The impression of something unusual first surfaced in ‘Erstarrung’, in which Bostridge’s demeanour became agitated, fidgety. ‘Rückblick’ was camped up, from the odd face of recognition which Bostridge pulled as his partner started the prelude before taking it up himself, through he frantic whirl of the opening verses to the overblown sarcasm when he addressed himself “Da war’s gescheh’n um dich, Gesell”. This crazed account of words and notes was accompanied by equally deranged tottering around the stage.

I began to think that Bostridge saw this winter’s journey as a descent into madness. In several of the faster songs he seemed to be portraying someone poised on the verge of insanity. Allusions to the beloved in several songs were given a wildly derisive bite: In ‘Die Post’ reference to his “liebes Liebchen” brought a pronounced sneer and the final lines were perverse, the galloping rhythm turning into a bizarre prancing. ‘Der stürmische Morgen’ seemed to come out of a delirium, while the succeeding ‘Täuschung’ was dismissed at a faster speed than I have ever heard it played. Some of the words in ‘Letzte Hoffnung’ were sent up, to confirm the overall impression.

Once this idea came into my head, I began to interpret other features of the performance in the same light. If not to convey the unbalanced state of the man’s mind, why introduce marked ritardandos on the adjectives in the lines “Ach dass die Luft so ruhig! Ach, dass die Welt so licht!” which could only be intended to emphasise how far from normal human responses he is.

But then, for the last five songs, there came a reversion to a more orthodox view of the cycle. Sincere abjectness in ‘Der Wegweiser’ marked the transition. Lucidity seemed to have been regained. After a gloriously warm prelude from Uchida, ‘Das Wirtshaus’ was given a poetically concentrated, vocally sustained performance, ending in a long assertive crescendo. In the following ‘Mut!’ the defiant mood was proclaimed by both pianist and singer without a hint of the previous hysteria. Realism continued in ‘Die Nebensonnen’, in which Bostridge gave some of his most honeyed singing of the evening, leading to a heart-breaking conclusion. ‘Der Leiermann’ left a question mark, as perhaps it always should.

Of course my diagnosis of Bostridge’s and his partner’s intention to depict a man under great stress and flirting with insanity may be quite wrong but all interpreters of “Winterreise” have to seek a way of uniting the sometimes disjointed strands of the cycle into a coherent narrative. This was a puzzling but stimulating reading which took its own imaginative route in that direction.

The one regrettable feature of this recital was the number of unwritten entr’actes for an army of coughers between most, if not all the songs (and occasional isolated solos during them). Bostridge hid his feelings but I suspect he and Uchida were exasperated at the continuity of the cycle being disrupted. They could not win: initially they tried to move on without a break from one song to the next, only to have the opening bars covered by audience noise, while pausing instead was treated as a signal for an extended coughing break. After ‘Einsamkeit’ Bostridge retreated momentarily behind the piano. Unfortunately three latecomers were at that point admitted and scurried their way to their seats in the middle of the third row, not completing their journey until the music had recommenced! Barbican Director Nicholas Kenyon, who was sitting just in front of me, will hopefully consider measures to prevent a recurrence.