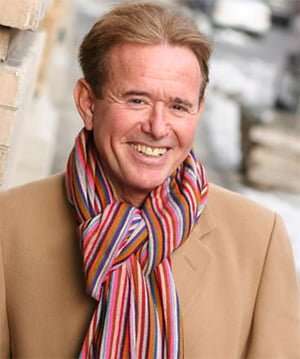 This Sunday-afternoon concert was another gift to the World from Detroit, arriving to your reviewer in London at a civilised 8 o’clock, and featuring a major new if not-new piece by David Del Tredici (born in 1937).

To explain, from the Detroit Symphony Orchestra’s programme notes. “Although these concerts hold the first complete performances of Dum Dee Tweedle, it is not a new work and has a most curious history. In 1986 Zubin Mehta, then Music Director of the New York Philharmonic, asked Del Tredici to write a work for the orchestra irrespective of length. Two years later, when he became the Philharmonic’s Composer-In-Residence, that request turned into an actual commission for a work roughly 40 minutes in length which was to be called The Spider and the Fly. He made some preliminary sketches at that time, but did not formally set to work on the new piece until 1990. As he worked on it, his initial concept changed dramatically as did the length and the title of the work. By 1992 he had finished a complete sketch, and when he played excerpts of it for the Philharmonic’s new Music Director Kurt Masur, he was told that the orchestra would not be able to play it because of its inordinate length. He was given two options: either drastically reduce the length of what was now called Dum Dee Tweedle or finish The Spider and the Fly. He chose to do the latter, and Spider was finally given its first performance in May of 1998 with Masur conducting.”

And now a few words from the composer himself about the tenth and last of his ‘Alice’ pieces (so, Final Alice was but a ruse!). “Dum Dee Tweedle is total nonsense. Don’t look for a normal plot or a cast of characters consistently sung. Everything, opera-wise, is askew. The work—a setting of Chapter Four, “Tweedledum and Tweedledee” from Through the Looking Glass of Lewis Carroll—is in 10 scenes with a Finale. It is written for narrator, four solo voices (soprano, alto, tenor, bass), SATB chorus, and a large orchestra. Highlights include an Opera within an Opera (the poem, “The Walrus and the Carpenter”), a ballet (“Fugue of the Hopping Oysters”), and a snoring machine (Scene 4). Much of the music is fast and breathless. The work lasts perhaps 80-90 minutes without an intermission.”

Before all this fun – and, let me tell you, Dum Dee Tweedle was terrific – Yoonshin Song, the DSO’s Concertmaster, gave a delightful performance of Mozart’s ‘other’ D major Violin Concerto – rare enough to have not previously been scheduled by the DSO – an elegant entrée played with style and a light touch, buoyantly accompanied by a small group of strings and pairs of oboes and horns. Something of a DSO family gathering, then, giving a first movement that was crisply martial but with soft-centre contrasts, a slow one that had both gentility and gravitas, and a finale of courtly grace interleaved with something a little more frolicsome. Yoonshin Song played with silvery purity and brilliance, and tenderness in the Andante; and it was good to hear the decoration that comes through using vibrato. 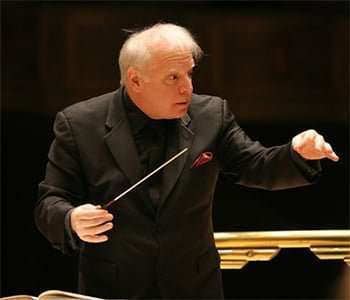 Having given the world premiere less than 24 hours previously, the required narrator, singers and players returned for a second outing of David Del Tredici’s Dum Dee Tweedle. Under master of ceremonies Leonard Slatkin’s committed and galvanising direction, this was quite something. Just one problem, an auditory one, the narrator and solo vocalists were often forwardly balanced in relation to the chorus and orchestra; presumably requested by the composer, the amplification lent them, certainly early on, an edgy timbre and a separate acoustic, and throughout there were also numerous noises-off that seemed like microphones being knocked, which may have been exclusive to WWW viewers.

Where to begin with Dum Dee Tweedle? Well, you can’t, save that Alexandra Silber opened proceedings and was a charismatic and unstinting narrator from her first word, with a range of voices and no little involvement; and the singers, Hila Plitman without a score, rose to the occasion with characterful contributions as well as hand and facial gestures. Musically, you just can’t second-guess what Del Tredici will do, although I did note some correspondences to Leonard Bernstein, not least his wonderful Songfest. But best to take Del Tredici’s advice and not look for normality. I therefore enjoyed Dum Dee Tweedle as an 80-minute (to the second) aural extravaganza of irresistible energy, amazing orchestration (I loved the ‘big band’ brass) and a stylistic diversity that suggested we have been here before, yet it all seemed completely new. Alice would no doubt have been curious about this.

Most at the time I had no idea what was going on in terms of story, although the DSO did flag-up scene by scene guidance; I did though register the Walrus and the Carpenter deployed as sirens to the sea-leaving Oysters, and in ‘The Fugue of the Hopping Oysters’ the orchestra became the star turn, the DSO relishing its ‘solo’ spot as part of a lyrical-fantastical kaleidoscopic score, grindingly dramatic at times, and with much that beguiles in terms of invention and the colourful dressing that Del Tredici gives it. ‘The Monstrous Crow’ is the final scene, when Tweedledee, Tweedledum and Alice look back over the past events. This is an unflagging score, but not a relentless one, and the Wayne State Symphonic Choir seemed infallible in all that it did, and snoring well (no doubt a tribute to the preparation by its conductor Dr Norah Duncan IV, a male, to avoid any confusion).

In a word: stunning! As was the performance, with Del Tredici in the audience. I want to hear Dum Dee Tweedle again; it enters the memory easily but its events are currently a big montage where anything can happen anytime. That’s intriguing in itself.