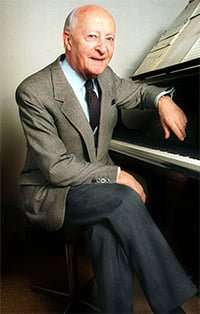 This concert continued the imaginative Woven Words series, celebrating the centenary of Witold Lutosławski’s birth, and juxtaposed one of his major orchestral utterances alongside one for chamber orchestra and two significant works by French composers who were important influences upon him – and just as much at home in the on-going The Rest is Noise series at the Southbank Centre.

Jeux Vénitiens (1961) was the first of Lutosławski’s works to employ the technique of “controlled aleatorism”, which he developed throughout his career. In some ways his use of it has been misconstrued insofar as it is understood as introducing an element of chance into an otherwise predetermined composition. In Lutosławski’s case it is used in order to suggest a loosening of the music’s flow rather than undermining its course or rigour by allowing a certain amount of improvisation. Indeed the four movements of Jeux Vénitiens are precise and purposeful in terms of form, timbre and harmony.

The RCMSO certainly left nothing to chance and carefully characterised music that threatens to become disconnected. Brief, arresting outbursts from the percussion and brass in the first part punctuated the strings being alternately fluttering, or sustained and reserved. Far from constituting a disintegrated entity a unified whole was created. The quieter rustlings of the second part sounded hesitant initially, but they were bound together by a steady acceleration in pace. In the third, credit to Lindsay Bryden for the full, sensuous but anxious tone she gave the flute solo, like a re-composition of Debussy’s Syrinx superimposed on the complex orchestral musings leading to an agitated climax. There was a scratchy start to the string harmonics at the outset of the final part, and although the murky effect in the ensuing piling-up of the chords was deliberate, there seemed to be a miscalculated dull tone, which carried over to the woodwind passages. But this was redeemed by a furious and dazzling climax.

Debussy’s Nocturnes followed Prélude à l’après-midi d’un faune and was similarly seminal. ‘Nuages’ began rather swiftly and straightforwardly here – it was only with the introduction of the strings that the music was instilled with a more mysterious mood and became appropriately nebulous. In ‘Fêtes’, after an initial eruption of excitement, the tension and festive mood relaxed somewhat so that the effect was more of an urbane tea-party than a raucous festival (even if only an imagined one, as Debussy tells us). The pace did not seize up completely, however, and there was an impression of spaciousness with the trumpets sounding as though from afar.A semblance of distance and depth was also achieved at the beginning of ‘Sirènes’ and by the way that the sopranos and altos were each placed well apart from each other. (The singers were presumably also RCM students, but this was not specified.) Their often long-breathed lines were held securely and, even if the strings might have been more luscious, and intoxicating point was reached when the passing back and forth of the vocalises became both beguiling and maddening, as though leading all who would hear them to their certain doom.

It was curious in a concert celebrating Lutosławski that he was not given the last word. At any rate the RCMSO seemed entirely at ease with Symphony No.3 (completed in 1983). The performers again need to be cautious of not letting momentum sag between sections that might seem apparently unconnected. Fortunately Franck Ollu ensured that episodes connected and were nuanced and sensitively phrased. There was deliberate and controlled hesitation in the introductory portion of the work (although the cello solo was not absolutely clean, either with pizzicatos or glissandos) and in the second and most symphonic part the momentum built up naturally and cogently; and the cantilenas which emerge in the strings from the upheavals of the Symphony’s last portion were a little messy, even taking account of the little slides that Lutosławski notated. But there was certainly a rich and beautiful tone in the latter, and the general effect of the performance was of an implacable course brought full-circle with the final appearance of the alarmingly emphatic four-note motto in the brass which had impelled the work from the off.

Finally, in the Second Suite from Roussel’s ballet score Bacchus et Ariane, Ollu brought fluid surging and swelling to the music. It’s a mark of the orchestra’s skill (aspiring to professionalism) that the musicians were able to be alive to such demands, with a voluptuous sheen to the strings. Notable too was the bloom and roundness of sound in the horns’ heroic melody towards the bacchanalian close. In the music’s most ecstatic moments the rhythms could have been more insistent, but in most respects the performance, as throughout the concert, was impressive and convincing.