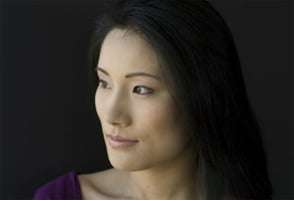 This recital marked Chinese pianist Xiayin Wang’s London debut. As a child she studied at the Shanghai Academy before moving to the United States to continue her training in New York. She has been very thoroughly taught in China – and is every inch a virtuoso, with an awesome technique that takes huge demands of precision, power and stamina for granted.

Before taking any other of her charms into consideration, I am as putty in the hands of any pianist who programmes Haydn sonatas. Xiayin Wang chose his final such work, which, despite elements of formal grandeur, is Haydn at his characteristically wittiest, and would have been wittier if we’d had the exposition repeat, but no matter. Xiayin Wang was up for the vivid changes of texture and mood, less so with that undertow of classical style that gives the music that vital dimension of sparkling dialogue. Basically, the drama was there – she just needed to lighten up a bit, which she did in the finale, taking obvious delight in music that looks so straightforward on the page but is a minefield of subtle nuance and aerated phrasing.

She was much more at home with the all-American idiom of the Sonata by the prodigiously gifted pianist and composer Earl Wild who died last year aged 94. His music, which Xiayin Wang has recorded for Chandos, is inspired by Gershwin’s songs, and this spirit feeds the 17-minute Piano Sonata (2000) in its bracing jazz idiom and pounding rhythms. Xiayin Wang injected clarity into the dense textures of the first movement, was impressively lyrical in the dreamy slow movement and thrilling in the concluding ‘Toccata’, inspired by Ricky Martin (the Puerto Rican singer and gay icon) for its Latin American-style vivacity. Rachmaninov’s Moments musicaux was highlight of the evening, if only because Xiayin Wang’s undoubted facility was at the service of the music’s unabashed romanticism and veiled anxiety.

Two barnstormers closed each half of the recital. She took Liszt’s Mephisto Waltz at a terrific lick, as if to demonstrate that she could, but speed isn’t everything in a demonically bravura piece that should be almost indecently incandescent. Similarly, the fiendish difficulties of La valse were easily within her reach, even at the dizzying tempo she set herself, although Ravel’s agenda of ‘the waltz’ dancing itself to the brink proved more elusive – there is much more that can be done with this piece.

Xiayin Wang’s technical accomplishments are formidable. There is a focus, poise and control to her playing that is almost scarily intense, but she didn’t give much away – emotional demands, in the Liszt and Ravel particularly, were just out of her reach, and it’s that area of performance that in the end is all that matters.