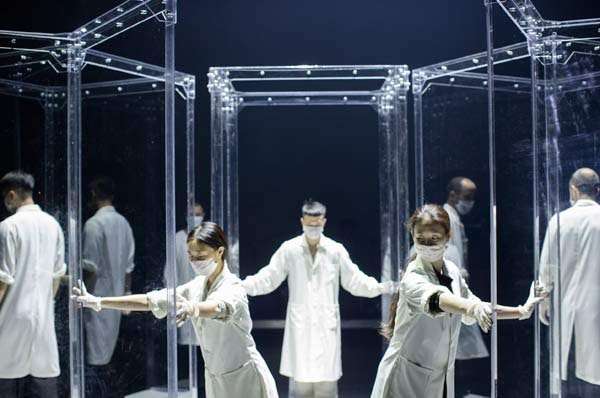 Sidi Larbi Cherkaoui has gained a serious international profile and is in demand the world over – as a non-ballet choreographer, he has, amazingly, just taken up the reins at the Royal Ballet of Flanders, perhaps marking a turning-point in that company’s artistic direction. He is also something of a cultural magpie, gathering influences from dance the world over to inform his own creativity; he has worked with Shaolin monks to flamenco stars. And so Genesis 生长 was made, a collaboration between Beijing’s Yabin Studio and Cherkaoui’s own Antwerp-based ensemble Eastman, premiered in China in 2013 and now making its UK debut at Sadler’s Wells.

What cannot be denied is Cherkaoui’s artistic adventurousness, his catholic tastes in music and design, and his seemingly infinite capacity to absorb more and more influences into his own choreography. So what we get is a distinctly Chinese-flavoured dish with many additional hints and aromas. Just as with much fusion cooking, the result can be surprising, revelatory even, but also just plain bizarre, not forgetting that there are combinations which just should never be put together. This is a slick show, with high-grade production values and impressive lighting: perspex boxes are wheeled around and positioned in differing combinations and shapes, reminiscent of a laboratory with specimens suspended within. This is not coincidental – Cherkaoui and Yabin Wang, the Chinese dancer and leader of her eponymous troupe, wish to evoke the relative sterility of human birth and death in the modern age and also to investigate the relationship between humanity and the world around it. 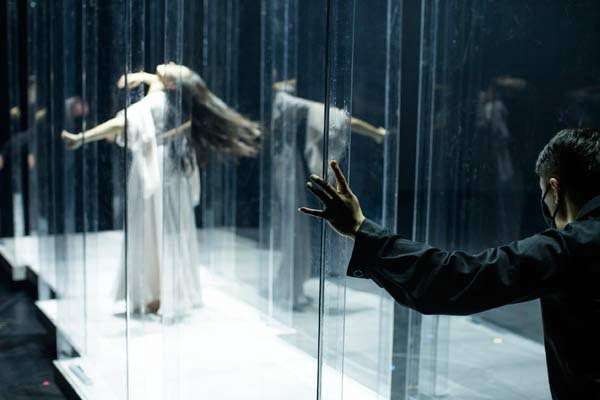 Dancers don lab coats and even surgical masks and are clearly exploring the world of the operating theatre, the autopsy room or the scientific laboratory; at others they wear loose vaguely oriental clothing. But obvious evocations are few and far between, and as the show progresses, the vision, message or theme becomes more obscure – Genesis 生长 is a series of vignettes, which follow each other with no great logic. Emphasising the disjointed nature of the structure, the music, which lurches from electronic soundscape to Latin-rhythms, to singing in Chinese, Japanese and Congoloese Lingala, to live piano, guitar and Indian mridanga, all to Olga Wojciechowska’s compositions. Mood and pace change from section to section, but without a clear direction it all becomes a succession of set pieces, rather than an arc of sound and movement which takes us somewhere. In addition to his own free-flowing choreographic style, Cherkaoui also shows influences of body-locking, capoeira, and there are even sections with large Perspex balls which the cast manipulate in their hands and into shapes in the air. 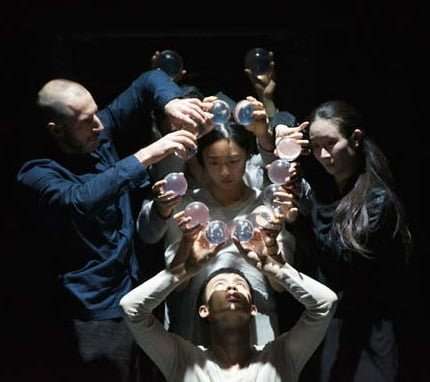 There are moments of the variety show about this approach – one dancer manipulates these balls with admirable dexterity, and as he acquires more and more which he then moves about, his hands evokes the multiplication of cells at the beginning of life, but we cannot get away from the impression that this is a ‘turn’ by someone with a particular talent. Equally, in a particularly striking section, Kazutomi ‘Tsuki’ Kozuki is brought in a body-bag and ‘resurrected’ by the magician-like hands of another cast member. His almost unbelievable flexibility and talent in creating the illusion of his inert body being manipulated by an outside force is extraordinary to witness but, again, it is something of a ‘turn’ which finally comes to a close, and that particular movement palette is not seen again.

The dancers and musicians cannot be faulted, such is their physical and artistic engagement with this endeavour, and it is interesting to see the interplay between eastern and western-trained bodies. I would have wished for a few moments of a little less seriousness just to leaven the 80 minutes of this work; it is a long time in a theatre to be very serious about the ‘Nature of Humanity’, which, given the grimly set features of the cast, we can assume is not particularly positive in Cherkaoui’s book. Genesis 生长 has its moments of undeniable brilliance, but the episodic and fragmented nature of its structure and the absence of a visible, strong and overriding theme make for an ultimately unsatisfactory artistic meal – it is very much like one of those enormous buffet spreads with food from every cuisine imaginable; what ends up on your plate can sometimes not be the best of combination of flavours or indeed provide the balance of taste interplay which makes it truly delicious.