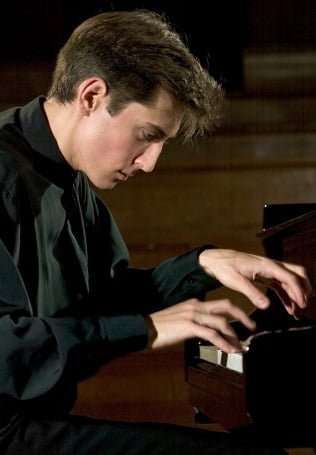 Ponder this programme for a moment. With music by three great composers taken from the later periods of their lives, played in historical order, it is clear that a very great deal of thought had gone into the planning of this recital. Yet in ending it with a piece of secondary gewgaw one might have thought this would lead to a lowering of intellectual attraction.

The initial attraction lay in the choice of rarely-heard music by incontestably great composers entering their high maturity, as opposed to the concluding work by the somewhat less-great French master from comparatively earlier in his career. In the sequence of Haydn, Beethoven and Scriabin, one might reasonably expect to encounter a distillation of their genius, and how, in their later music, they came to influence younger contemporaries, and, indeed, music of succeeding periods.

Such understandable surmises did not count on Yevgeny Sudbin’s subtleties, as we were to hear. By the time of Haydn’s B minor (what a key!) Sonata of 1776, the composer was reserving his most strikingly original ideas for the keyboard, more so in some ways than those of Mozart, whose innate civility of expression would neither have embraced this particular key-signature (save for the Adagio, K540), nor the hard-edged direct manner of the older, more streetwise, Haydn.

Consequently, this music demands, and can only benefit from, a profound understanding of how the material is used in expressive terms, and in this regard Sudbin was astonishingly perceptive, demonstrating throughout the profound originality of this music. This was utterly compelling playing.

Beethoven in 1824 had put his large-scale writing for the keyboard behind him, concentrating upon the elliptical encapsulation of his ideas in his wholly original Opus 126 Bagatelles. The notion of sets of short pieces may well have impelled Schubert’s Impromptus and Moments musicaux a year or so later, yet it was not solely the time-scale but the juxtaposition of tonality which would also have astonished Schubert, for in these pieces Beethoven is already in his ‘late’ period, and the varied challenges, for the audience as much as for the pianist, are not to be understated.

What was so consistently impressive about Sudbin’s realisation of this still-difficult music was his concentration and also his wide range of touch – his sense of phrasing within those sudden changes of dynamics, at once falling away to a genuine pianissimo, breathtaking in its emotional expression, such as to cause us to wonder anew about the creative imagination of the by-now profoundly deaf Beethoven, Sudbin enjoining us to follow in his journeying.

More of the same was to come in the two Scriabin Piano Sonatas, the relatively early Mazurka coming after the Fifth, one of several Sonatas by this composer unforgettably recorded by Horowitz. But it was Sudbin’s dumbfounding performances that left one very deeply impressed. The Mazurka was immediately followed, attacca, by the Ninth Sonata (Black Mass), at the conclusion of which Sudbin further segued into his adaptation of transcriptions of Saint-Saëns’s Danse macabre – raising the stature of that orchestral work, far from being a comparative lightening of mood and a virtuoso showpiece, into a continuation of the brooding intensity and extraordinary mood-swings which characterise so much of Scriabin’s music. At the conclusion, Sudbin was greeted with a standing ovation – and in return we were rewarded with two encores: more Scriabin, the C sharp minor Etude (Opus 2/1) and Chopin’s A flat Ballade (Opus 47).

This recital was an event such as comes but rarely – here is a great pianist, a great artist and a great musician and he was at the height of his considerable powers.