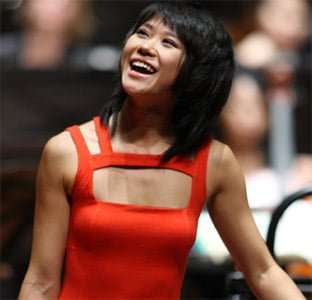 Yuja Wang’s Carnegie Hall recital interlaced works by three Russian composers with three pieces by Chopin. Wang cuts a diminutive figure in her trademark stiletto heels and short, tight dresses, but she brings as much power and technical virtuosity to the keyboard as anyone around, and showed off her facility in a variety of musical styles.

In Prokofiev’s single-movement Third Piano Sonata, Wang drove forcefully and relentlessly forward in the Allegro tempestoso sections, and brought gentle lyricism to the Moderato episodes. An accelerando following a soft, long-sustained E led into an increasingly dense texture and urgent impulsiveness that persisted through the finish. Wang’s accuracy was flawless, but in the most rapid passages the contrasting voices could have been better delineated.

Wang gave Chopin’s Piano Sonata an engaging reading, combining impressive technique with sensitivity to the work’s lyrical qualities. The opening Allegro maestoso grew in complexity from its apprehensive opening with a rumbling bass line, the second theme played lovingly, set off by delicate trills and runs. Wang kept thematic lines clear, building drama harmonically and dynamically, then introspective in the soft passage leading to the final chords. The scherzo was lightning-fast and light as air, contrasting with the more serious and fully harmonized trio. After the Largo’s ominous opening gestures, Wang gracefully spun out the lyrical theme, retaining tranquility even at moments when the music seemed about to increase in tension. Wang attacked the theme of the finale with a strong pulse, dashing off glistening runs at high speed. In the contrasting sections, she excellently juxtaposed the theme in her left-hand against the runs and ornaments of the right. The coda was a strong yet frothy brew, capped off by powerful chords.

The second half began with Nikolai Kapustin’s Variations, based on the opening bassoon solo from Stravinsky’s The Rite of Spring. Kapustin (an Ukrainian born in 1937) draws on both his classical training and his years as a jazz pianist a pastiche of jazz styles and Wang created an impression of improvisation as she navigated its bouncy, syncopated rhythms and melodic inventions. The relentless beat relaxed briefly for some soulful measures, but then the pace grew faster than ever, with dazzling passagework highlighting the final variation.

Chopin’s C minor Nocturne came across as even darker than its title suggests. After intensely chromatic chords led to a lyrical passage, Wang emphasized the bass line, which seemed to overwhelm the melody in her right hand, and the gentle ending felt like funereal tolling. The mood brightened considerably in the A flat Ballade, in which bell-like figures in a high register ushered in a syncopated, dance-time melody. Wang skillfully carried off the many trills, runs and harmonic modulations, with great power in the concluding bars.

Wang ended the program brilliantly with Three Movements from Petrushka, a virtuoso concert-piece that Stravinsky composed for Arthur Rubinstein. Designed to allow the performer to demonstrate prodigious technical virtuosity, that is precisely what Wang did, yet still managing to retain a certain narrative character from the original ballet. She threw herself into the work almost literally, dashing off runs and other passagework in spectacular fashion, and in the finale, depicting the Shrovetide Fair, her pedal-work was outstanding, creating an almost orchestral sound. Climax built upon climax as the audience held its breath in anticipation until Wang finally dashed off the concluding glissando.