¡Rodrigo!
A celebration of Joaquin Rodrigo 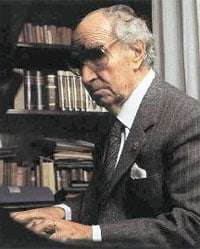 Joaquin Rodrigo (1901-99) was born in Valencia and become one of the most honoured of Spanish composers. In 1996, towards the end of his long life, he was awarded the Prince of Asturias Award, the highest honour given to Spanish civilians, and two years later the French government named him a Commander of the Order of Arts and Letters. He was blind for most of his life, having contracted diphtheria at age three. He said that had he not been blind, he would probably never have become a musician. He began piano and violin lessons at age eight and later-on studied harmony and composition. As a composer he wrote his music in Braille which was then transcribed into musical notation. His musical education included working with Paul Dukas (the composer of The Sorcerer’s Apprentice). In 1947 he became a Professor of Music and took the Manuel de Falla Chair of Music at Madrid University.

Rodrigo’s output was prodigious and included much vocal music for solo voice as well as for chorus and orchestra. His stageworks include a single zarzuela, “El hijo fingido”, an operetta, “El duende azul”, some ballet and incidental music and music for films. Much of his work is rarely played, yet he is globally known for Concierto de Aranjuez (a guitar concerto) which he wrote in 1939 and which has been transcribed for various instruments including harp and flute. Jazz trumpeter Miles Davis adapted the central Adagio for his album “Sketches of Spain”.

The Zarzuela Obligato Opera Society was formed earlier this year with the intention of performing zarzuelas in staged productions and in concert presentations that retain the flavour and spirit of gypsy and Moorish music with beautiful melodies that are akin to the Italian aria and the Neapolitan song. The genre incorporates actors, dancers, musicians and singers.

This preview concert was a taster in a tribute to the music of Joaquin Rodrigo, to mark the tenth anniversary of his death. The four singers, Edward Mirza, Scheherazade Pesante, Lioc Guguen and Paloma Bruce, all excellent voices, performed some of Rodrigo’s vocal gems, and many of them are just like little jewels, which makes one wonder why they are not more performed. From “Cuatro canciones Sefardies”, Bruce sang three of the songs, ‘Respondemos’, a plea to the god of Abraham to help his people in their hour of need; ‘Una pastora yo Ami’, about an adored shepherdess who does not return the love she is offered; and ‘Nani nani’, which hopes that a mother’s son will become a great man. Bruce’s soaring voice was packed with emotion.

Rodrigo often used the music of the 16th- and 17th-centuries but gave it a contemporary spin that was significantly not in a traditional Spanish style. Scheherazade Pesante then sang two songs, ‘Adela’, in which a poor girl who is dying of love for a young man called Juan, and ‘Coplas del Pastor Enamorado’, about a broken promise that cost a young woman her love. These are passionate songs, delivered with great force. Then Pesante was joined by Loic Guguen for a duet from Rodrigo’s only zarzuela, “El hijo fingido” and later on with Paloma Bruce, they sang a trio from the same work in which a young girl faints in order to escape her chaperone and uses a flower-seller as a cover for flirting with her boyfriend, but the florist does not seem to have the bloom they are seeking. The plots of the zarzuelas do not matter – the beauty of the music carries the mixture of drama and comedy and which seduces the audience into enjoying the sheer effrontery of the plot.

Loic Guguen’s solo was “La grotte”, in which two lovers meet in a cave by the sea. Guguen’s astonishingly rich baritone brought these plangent pieces to life in a refreshingly and almost magical way. Bruce’s other solos were from “Cuatro madrigales amortorios”, all about love again, but here with a little light relief from Rodrigo’s usual romantic style and we even had some exquisite coloratura laughter in the music, accompanied by some very fast pianism from Stephen Hose. The fourth singer in the group, tenor Edward Mirza, sang a couple of Rodrigo’s Christmas carols or “Villancicos”, with music to words by Lope de Vega and Rodrigo’s wife Victoria Kamhi, two delightful pieces about a shepherd boy and a mermaid, which he sang with both clarity and precision.

The evening ended with the Adagio from Concierto de Aranjuez played on piano, then sung and then given a different feeling altogether on the trumpet by jazz musician Duncan Fraser. This was an evening of pleasant surprises that makes one look forward to more rarities from the Zarzuela Obligato Opera Society.