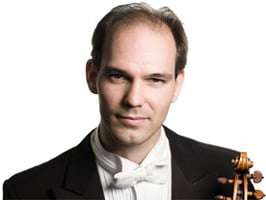 Zsolt-Tihamér Visontay is perhaps best known in his role as Joint Leader of the Philharmonia Orchestra. His duo partner, Min-Jung Kym with whom he has recently shared a concert tour of Europe, is a former student of the Royal Academy of Music and was named British Pianist of the Year.

This was an intelligently planned programme which played to both artists’ strengths. Instead of either of Bartók’s numbered Violin Sonatas we were offered a rarity, his 1903 example dating from the composer’s last years as a student at Budapest Conservatory. A substantial work lasting just under half-an-hour, it was coolly received by Leopold Auer and the jury at the Prix Rubinstein when it was played in Paris in 1905 and Bartók rejected the work. Played blind to most music-lovers it is doubtful that one in ten would guess its composer since it has far more in common with Richard Strauss’s early Violin Sonata than anything that was to come later from Bartók’s pen. 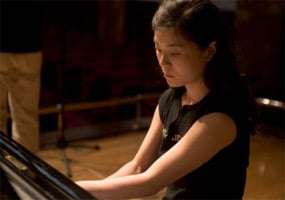 Visontay is endowed with prodigiously accurate intonation, even in the more treacherous reaches above the stave, and he produced a glorious sound from his Guarneri, especially in the opening movement’s voluptuously lyrical episodes. Like César Franck’s Violin Sonata, the piano part too makes extraordinary demands – presumably it was intended to showcase Bartók as a budding virtuoso – and Min-Jung Kym tackled these with a combination of power and sensitivity. In the central Andante, ushered in by the violin alone but later intertwining with sombre statements from the piano, one glimpses the Bartók to come but then amazingly its central section turns skittish, even outright witty, with cimbalom effects from the piano before returning to its introspective roots. The finale, a sparkling folksy Hungarian Vivace, overworks its material and outstays its welcome but was delivered here with a panache which made light of its weaknesses.

The evening’s stand-out performance was the Debussy, his last completed work, whose elusive interior world the duo entered with complete success. Written during the First World War, it places extreme demands on both players, using the maximum pitch range available on the violin and calling for a certain lightness of touch at speed on the part of the pianist. Volatility, fantasy and legerdemain are keynotes to success – the opening almost hangs weightless in the air before the work erupts into unpredictability. This was remarkably assured and sympathetic. Visontay used the widest palette of colours and the duo brought a poised nonchalance to the ‘Cakewalk’ second movement with its throwaway ending given perfect comic timing.

Rather more problematic was the ‘Kreutzer’ Sonata. It was undoubtedly on the grandest scale given with almost orchestral amplitude, and if sheer drama were the sole measure of success this would have won hands down. The first movement survived this full-on treatment best. The lead into the main Presto was notably well-managed, the tempo fast but not too extreme to allow for clear articulation, and with the development came that intangible sense of setting out on a journey to uncharted regions. However, thereafter the central Andante’s variations were jollied along, consistently fleet and forceful, everything taking place in the full glare of daylight, and this prevailing over-forcefulness carried over into the tarantella-like finale. Beethoven referred to the ‘Kreutzer’ as a “Concerto-Sonata” which implies more than a conventional sonata, but given with such unremitting intensity the work’s quasi symphonic tensions failed to make their full impact, the overall effect strangely two-dimensional.

Whatever reservations one might have about matters interpretative the execution throughout the recital was of a poise and assurance which would have given many famous violinists pause for thought. There was an encore, an arrangement of ‘Clair de lune’ from Debussy’s Suite bergamasque.