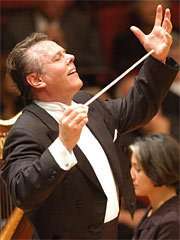 What if BMW ‘did’ orchestras? Of course they would be sleek and elegant and designed for maximum efficiency. They would happily traverse melodious peaks as well as trip lightly over cobbled dissonance without complaint: reliable, efficient and perfect in every way – but just that little bit boring.

News had got out that this concert was going to be something to see … there was hardly a spare seat in the packed Royal Albert Hall. The Bavarian Radio Symphony Orchestra brought its own organ (for the ‘2001’ opening to the Strauss) rather than use the Hall’s own – due to any potential difference in pitch – the effect was visually unexpected and audibly underwhelming.

After a ‘Sunrise’ on steroids, the tempo settled down to produce an exemplary performance with a notably lush sound from the strings and a judicious observance of dynamic markings. The winds and brass were compacted onto the platform with the horns and trumpets placed in front of each other two abreast rather than spread out across the back. This made the orchestra appear smaller than it was, but the sound was much more intense and rich as a consequence. 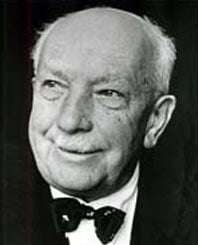 As has become usual, audience-members coughed in the quiet and exposed sections of the music and were a distraction. The use of a ‘church bell’, rang true without a hint of a harmonic and provided a focus on the control that made this performance one of the most memorable this Proms season but also enshrined what was is this work’s greatest flaw. Strauss’s depiction of Nietzschean philosophy sets man against nature with man struggling to break free, including a flight into the ether and a climatic attack which is firmly quashed by nature with a resolute C major chord. This is a piece that requires a little chaos and Mariss Jansons as Übermensch, as incredible as he is, did not allow this madness to escape.

As he did with the Oslo Philharmonic during the 1995 Proms, Jansons paired Zarathustra with one of the 20th-century’s great symphonists – and the same symphony, too. Stephen Johnson’s programme note described a series of meetings in 1907 between Sibelius and another great symphony-compose, Mahler. According to Sibelius they discussed the form of the symphony with the Finn admiring severity of style and logic whereas Mahler believed that “the symphony must be like the world. It must embrace everything”. Despite his embracing of formality, Sibelius’s music cannot be criticised for not being all-embracing.

Jansons’s view of Sibelius’s Second Symphony was classically reserved, exquisite in terms of precision, but lacked soul – especially in the first movement; in the second that ‘wall of sound’ was again to the fore in a well-balanced, finely-tuned rendition. Rubato, de rigueur in this movement, was expertly controlled. A well-articulated third movement, counterpoint lifting effortlessly from the page, lead to a climatic finale that turned disappointment into delight. There were a couple of issues of co-ordination, but these were quickly overcome to produce a crowning coda.

The BRSO’s strings were put to exquisite use in Sibelius’s Valse triste, and as an antidote to a tonality and romanticism the second encore was drawn from Bartók’s The Miraculous Mandarin (the ‘chase music’ that ends the Suite), the caustic dissonance refreshing after such rich harmonic pleasure and a somewhat mixed concert.