A compact and well-linked concert: Ralph Vaughan Williams dedicated his Fourth Symphony to Arnold Bax; Bax’s music has its Russian characteristics; and Rachmaninov played some of Bax’s piano music (I believe). 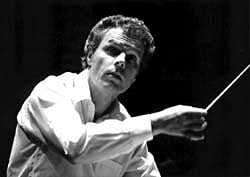 Ultimately, the concert fell short of expectations. Yan Pascal Tortelier led a curious, sometimes-interesting account of the Vaughan Williams. Over-deliberate tempos for the first and third movements curiously elongated the former and made the latter tepid; whatever the composer’s inspiration for this great mid-1930s’ work (threats of war, turmoil in his private life…), the anger of the music was tamed. Tortelier’s clinical dissemination of the score had its musical advantages in terms of clarity, articulation and detailing, but syncopation and too-overt allusions to folksong overrode power and inexorable onslaught.

Yet the deliberation of the first movement ensured that the hazy coda belonged more than it can and there was palpable menace in the (Beethoven 5-like) transition to the finale, which had more impetus than the symphony’s other fast music, and some curious highlighting of detailing, yet seemed more concerned with mechanics than message. The thumping final chord finally caught the mood, though, and was ‘conducted’ with a memorable exhalation from the conductor!

The slow second movement was the most compelling; bleached, implacable, underlining a kinship with Sibelius, the BBC Philharmonic’s woodwinds outstanding in matters of timbre and numbed expression. But the orchestra wasn’t quite at its best throughout the concert, most noticeably in the ragged and uncertain response in Rachmaninov’s concerto in which Yevgeny Sudbin was admirable in his unforced bravura and unsentimental poeticism yet lacked that last degree of personality and identification; and the feeling that he and Tortelier were not really together as co-interpreters or in ensemble.

London-born Bax’s sympathy for the Irish cause (including writing poetry as Dermot O’Byrne) came to a musical head at the time of the 1916 Easter Rising when Patrick (Padraig) Pearse, who Bax knew, was executed for his part in it. It was believed that Bax had not orchestrated In memoriam – until it was discovered in full score in 1993 in a publisher’s basement!

Baxians, and the BBC Philharmonic, will have been ahead of this ‘‘first public performance” thanks to Vernon Handley’s recording for Chandos (CHAN 9715). In memoriam is a characteristic work, the opening airy textures for example, with a glorious film-music-like idea that Bax went on to use in his score for David Lean’s “Oliver Twist” and which here seemed ennobling of the spirit, the (15-minute) piece as a whole being evocative and eloquent, stirring and soulful. If only the strings could have been a little more refulgent and the trumpets less raucous, but it was good to hear In memoriam live.